Three yari (Kagi yari, omi yari and su yari) mounted in koshirae, including one with an asymmetrical crossbar (hadome)

Yari (槍) is the term for a traditionally-made Japanese blade (日本刀; nihontō)[2][3] in the form of a spear, or more specifically, the straight-headed spear.[4] The martial art of wielding the yari is called sōjutsu. 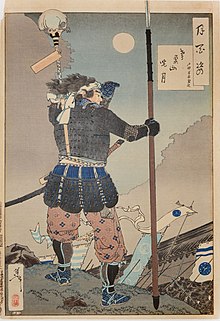 Early yari are believed to have been derived from Chinese spears. These hoko yari are thought to be from the Nara period (710–794).[5][6] While they were present in early Japanese history, the term 'yari' appeared for the first time in written sources in 1334 and this type of spear did not become popular until the late 15th century.[1] The original warfare of the bushi was not a thing for commoners; it was a ritualized combat usually between two warriors who would challenge each other via horseback archery.[7] In the late Heian period, battles on foot began to increase and naginata, a polearm, became a main weapon along with a yumi (longbow).[8] The attempted Mongol invasions of Japan in 1274 and 1281 was one of the factors that changed Japanese weaponry and warfare. The Mongols employed Chinese and Korean footmen wielding long pikes and fought in tight formations. They moved in large units to stave off cavalry.[7] Polearms (including naginata and yari) were of much greater military use than swords, due to their significantly longer reach, lighter weight per unit length (though overall a polearm would be fairly hefty), and their great piercing ability.[7] In the Nanbokuchō period, battles on foot by groups became the mainstream and the importance of naginata further increased, but yari were not yet the main weapon. However, from the Onin War in 15th century in the Muromachi period, large-scale group battles started in which mobilized ashigaru (foot troops) fought on foot and in close quarters, and yari, yumi and tanegashima (Japanese matchlock) became the main weapons.[8][9][10][11] Swords in a full battle situation were therefore relegated to emergency sidearm status from the Heian through the Muromachi periods.[7]

Around the latter half of the 16th century, ashigaru holding pikes (nagae yari) with length of 4.5 to 6.5 m (15 to 21 ft) became the main forces in armies. They formed lines, combined with soldiers bearing firearms tanegashima and short spears. Pikemen formed a two- or three-row line, and were trained to move their pikes in unison under command. All of The Three Great Spears of Japan were forged by the 16th century in the Muromachi period.[12]

The yari eventually became more popular than the yumi (longbow) as a weapon for the samurai, and foot troops (ashigaru) followed suit and used them extensively.[7] With the coming of the Edo period the yari had fallen into disuse. Greater emphasis was placed on small-scale, close quarters combat, so the convenience of swords led to their dominance, and polearms and archery lost their practical value. During the peaceful Edo period, yari were still produced (sometimes even by renowned swordsmiths), although they existed mostly as either a ceremonial weapon or as a police weapon. 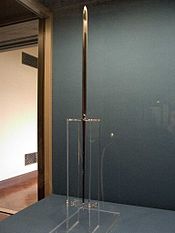 Yari were characterized by a straight blade that could be anywhere from several centimeters to 3 feet (0.91 m) or more in length.[4] The blades were made of the same steel (tamahagane) from which traditional Japanese swords and arrowheads were forged, and were very durable.[4] Throughout history many variations of the straight yari blade were produced, often with protrusions on a central blade. Yari blades often had an extremely long tang (nakago; 中心); typically it would be longer than the sharpened portion of the blade. The tang protruded into a reinforced hollow portion of the handle (tachiuchi or tachiuke) resulting in a very stiff shaft making it nearly impossible for the blade to fall or break off.[4]

The shaft (nagaye or ebu) came in many different lengths, widths, and shapes; made of hardwood and covered in lacquered bamboo strips, these came in oval, round, or polygonal cross section. These in turn were often wrapped in metal rings or wire (dogane), and affixed with a metal pommel (ishizuki; 石突) on the butt end. Yari shafts were often decorated with inlays of metal or semiprecious materials such as brass pins, lacquer, or flakes of pearl. A sheath (saya; 鞘) was also part of a complete yari.[4] 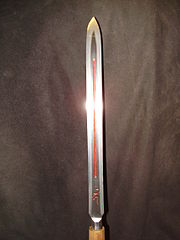 Various types of yari points or blades existed. The most common blade was a straight, flat design that resembles a straight-bladed double edged dagger.[4] This type of blade could cut as well as stab and was sharpened like a razor edge. Though 'yari' is a catchall term for 'spear', it is usually distinguished between 'kama yari', which have additional horizontal blades, and simple 'su yari' (choku-sō) or straight spears. Yari can also be distinguished by the types of blade cross section: the triangular sections were called 'sankaku yari' and the diamond sections were called 'ryō-shinogi yari'.[4] 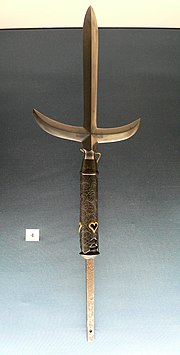 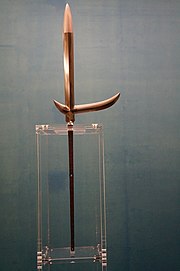