Ancient Greek pole weapon
Not to be confused with Xystos.

The length of Alexander the Great's xyston

The xyston (Ancient Greek: ξυστόν "spear, javelin; pointed or spiked stick, goad (lit. 'shaved')"), a derivative of the verb ξύω "scrape, shave", was a type of a long thrusting spear in ancient Greece. It measured about 3.5–4.25 meters (11.5–13.9 ft) long and was probably held by the cavalryman with both hands, although the depiction of Alexander the Great's xyston on the Alexander Mosaic in Pompeii (see figure), suggests that it could also be used single handed. It had a wooden shaft and a spear-point at both ends. Possible reasons for the secondary spear-tip were that it acted partly as a counterweight and also served as a backup in case the xyston was broken in action. The xyston is usually mentioned in context with the hetairoi (ἑταῖροι), the cavalry forces of ancient Macedon. After Alexander the Great's death, the hetairoi were named xystophoroi (ξυστοφόροι, "spear-bearers") because of their use of the xyston lance. In his Greek-written Bellum Judaicum, the Jewish historian Flavius Josephus uses the term xyston to describe the Roman throwing javelin, the pilum.

The xyston was wielded either underarm or overarm, presumably as a matter of personal preference. It was also known, especially later, as the kontos; meaning literally "barge-pole"; the name possibly originated as a slang term for the weapon.

The Xyston is a type of spear.[1] It is composed of a long wood staff and two pointed ends.[1] The spear is dual pointed to provide a spare, in case the first is broken off.[1] The spear-shaft measured three metres, 13–14 feet long, in length.[1]

The wood tapered at the ends, to fit into the iron spear heads at either end.[1] The middle of the spear is thinner that the out edges, giving the spear the impression of a concave shape.[1] 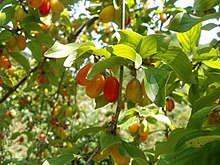 Cornus Mas, also known as the cornelian cherry, is common in the wood mountains that surround Macedonia, ranging from areas in the Balkans and into Syria; specific locations were Mt. Olympus, Phthiotis, Aetolia, Arcadia, Laconis.[1]

This cornel wood was used for the spear, because of its elasticity and hardness, making it very durable and the best material for spears, javelins, and bows.[1] The other woods could not compare to the properties of cornel wood.[1] The wood, despite being used for a spear that was so long, was able to withstand the weight of itself; it was tough enough to not need thickness to balance the weight of its length.[1]

Cornus Mas became so valued and widely used, that in the fourth and third centuries it was used in poetry to note the word spear.[1]

The ‘Foot Companions’, also known as the pezhetairos, utilised this spear and its length provided Macedonians with the opportunity to strike first, when in battle.[2] Alexander The Great forged the pezhetairos, who he had high influence over. He would go forth into battle armed only with his spear, the xyston, and they would too.[3]

A sketch of a Macedonian Phalanx, exampling their armour and weaponry.

In battle, the spear was advantageous. It was longer than a javelin, providing much deeper defence against the Persians.[4] The spear prevented the opposition from moving beyond the point of the spear, preventing hand-to-hand combat, which Persians preferred.[4] The Persians accustomed themselves more to javelins and used them as offensive throwing spears, instead of for defensive purposes.[4]

Macedonia possessed a skilled cavalry, known as the Hetairoi, who used the xyston spear as their main weapon.[2] Swords were only used as a last resort.[2] The cavalry used their height advantage, sitting on top of the horse, to pierce the faces and upper bodies of enemy infantry with the xyston, instead of lower limbs and torso areas.[4] Alexander is shown on horseback, wielding the xyston spear in the Alexander mosaic.[5]

When the opposition was able to insert themselves beyond the point of the spear, getting closer to the Macedonian soldiers, then opponents were able to overcome them. Close combat was not preferred for those using xyston spears.[4]

When the spear is shattered, it can leave the soldier open to attack and vulnerable. The wood has the potential to be an easy target if the user is overwhelmed by the enemy.[4]

The spear was a two-handed weapon.[1] It was held at the midpoint of the wooden shaft, instead of a typical lance, which was held just beyond that and this was due to the heavier weight of the spear.[4] Holding it in the middle required the soldier to have more control of his hold. Macedonian soldiers, when on extra-combat missions, would not use the spear in close confrontations, they would use a javelin.[1] The spear, being too long would prevent speed and would be a nuisance, in the case of any sudden fighting that took place.

The Cavalry could push the spare spike into the ground and use the ground to reinforce the spear as a means to injure the incoming opposition, but simple mathematics contradicts this statement.[4] A rider would find it difficult to remained balanced with the proposed angle at which the spear needs to enter the ground to provide effective reinforcement.[4]