Wushu (/ˌwuːˈʃuː/) or Kungfu, is a hard and soft and complete martial art, as well as a full-contact sport.[1][2] It has a long history in reference to Chinese martial arts. It was developed in 1949 in an effort to standardize the practice of traditional Chinese martial arts,[3] yet attempts to structure the various decentralized martial arts traditions date back earlier, when the Central Guoshu Institute was established at Nanking in 1928.

"Wushu" is the Chinese term for "martial arts" (武 "Wu" = military or martial, 術 "Shu" = art). In contemporary times, Wushu has become an international sport under the International Wushu Federation (IWUF), which holds the World Wushu Championships every two years as well as other. Wushu has become an official event at the Asian Games, Southeast Asian Games, and the World Combat Games among other multi-sport events.

On January 8, 2020, Wushu was included in the official competition of the Fourth Youth Olympic Games.

The word wu (武; wǔ) means ‘martial’. Its Chinese character is made of two parts; the first meaning “walk” or “stop” (止; zhǐ) and the second meaning “lance” (戈; gē). This implies that “wu’ 武,” is a defensive use of combat.[dubious – discuss]The term “wushu 武術” meaning 'martial arts' goes back as far as the Liang Dynasty (502–557) in an anthology compiled by Xiao Tong (蕭通), (Prince Zhaoming; 昭明太子 d. 531), called Selected Literature (文選; Wénxuǎn). The term is found in the second verse of a poem by Yan Yanzhi titled: 皇太子釋奠會作詩 "Huang Taizi Shidian Hui Zuoshi".

The great man grows the many myriad things . . .

Breaking away from the military arts,

He promotes fully the cultural mandates.

The earliest term for 'martial arts' can be found in the Han History (206BC-23AD) was "military fighting techniques" (兵技巧; bīng jìqiǎo). During the Song period (circa 960) the name changed to "martial arts" (武藝; wǔyì). In 1928 the name was changed to "national arts" (國術; guóshù) when the National Martial Arts Academy was established in Nanjing. The term reverted to wǔshù under the People's Republic of China during the early 1950s.

In 1958, the government established the organization to regulate martial arts training. The Chinese State Commission for Physical Culture and Sports led the creation of standardized forms for most of the major arts. During this period, a national Wushu system that included standard forms, teaching curriculum, and instructor grading was established. Wushu was introduced at both the high school and university level. This new system seeks to incorporate common elements from all styles and forms as well as the general ideas associated with Chinese martial arts. Stylistic concepts such as hard, soft, internal, external, as well as classifications based on schools such as Shaolin, Tai chi, Wudang and others were all integrated into one system. Wushu became the government sponsored standard for the training in martial arts in China.[4] The push for standardization continued leading to widespread adaptation.

In 1979, the State Commission for Physical Culture and Sports created a special task force to teaching and practice of Wushu. In 1986, the Chinese National Research Institute of Wushu was established as the central authority for the research and administration of Wushu activities in China.[5] Changing government policies and attitudes towards sports in general led to the closing of the State Sports Commission (the central sports authority) in 1998. This closure is viewed as an attempt to partially de-politicize organized sports and move Chinese sport policies towards a more market-driven approach.[6] As a result of these changing sociological factors within China, both traditional styles and modern Wushu approaches are being promoted by the International Wushu Federation.[7] 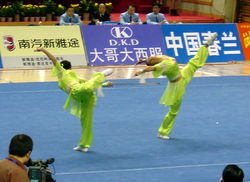 Wushu events are performed using compulsory or individual routines in competition. Throughout the 1990s until 2005 for international competitions, athletes competed with routines that were choreographed by IWUF assigned coaches or athletes. In November 2003, a major revision in the taolu competition rules occurred: deduction content was standardized, judges roles were organized and expanded, and the degree of difficulty component, also known as nandu (難度; difficulty movements), was added. This category is worth 2 points of the 10 total. The quality of movements category is worth 5 points, and the overall performance category is worth 3 points. These changes were first implemented at the 2005 World Wushu Championships, and individual routines have become standard where an athlete creates a routine with the aid of his/her coach, while following certain rules for difficulty and technical requirements.[8] Only the age group C and B athletes at the World Junior Wushu Championships still compete with compulsory routines at an international level. All junior events including group A athletes (which compete with individual routines), all traditional events, and all non-standard taolu events (ie. shuangdao, baguazhang etc.), are judged without the degree of difficulty component.

In addition to events for individual routines, some wushu competitions also feature dual and group events. The dual event, also called duilian (对练), is an event in which there is some form of sparring with weapons or without weapons. The group event, also known as jiti (集體), requires a group of people to perform together and smooth synchronization of actions are crucial. Usually, the group event also allows instrumental music to accompany the choreography during the performance. The carpet used for the group event is also larger than the one used for individual routines. The 2019 World Wushu Championships was the first international wushu competition to feature such an event.

The majority of routines used in the sport are new, modernized recompilations of traditional routines. However, routines taken directly from traditional styles, including the styles that are not part of standard events, may be performed in competition, especially in China. Many of these styles though are events in the World Kung Fu Championships, another IWUF-run event which is exclusively for traditional styles of wushu. The more commonly seen routines include:

There is also a traditional weapons category, which often includes the following:

The other major discipline of contemporary Chinese Wushu is 散打 Sǎndǎ, or 运动散打 (Yùndòng Sǎndǎ, Sport Free-Fighting), or 竞争散打 (Jìngzhēng Sàndǎ, Competitive Free-Fighting) meaning: A modern fighting method, sport, and applicable component of Wushu / Kung Fu influenced by traditional Chinese boxing, of which takedowns and throws are legal in competition, as well as all other sorts of striking (use of arms and legs). Chinese wrestling methods called Shuai Jiao and other Chinese grappling techniques such as Chin Na. It has all the combat aspects of wushu.

Sanda appears much like Kickboxing or Muay Thai, but includes many more grappling techniques. Sanda fighting competitions are often held alongside taolu or form competitions. Sanda represents the modern development of Lei Tai contests, but with rules in place to reduce the chance of serious injury. Many Chinese martial art schools teach or work within the rule sets of Sanda, working to incorporate the movements, characteristics, and theory of their style.

Chinese martial artists also compete in non-Chinese or mixed combat sports, including Boxing, Kickboxing and Mixed Martial Arts. Sanda is practiced in tournaments and is normally held alongside taolu events in wushu competition. For safety reasons, some techniques from the self-defense form such as elbow strikes, chokes, and joint locks, are not allowed during tournaments. Competitors can win by knockout or points which are earned by landing strikes to the body or head, throwing an opponent, or when competition is held on a raised lei tai platform, pushing them off the platform. Fighters are only allowed to clinch for a few seconds. If the clinch is not broken by the fighters, and if neither succeeds in throwing his opponent within the time limit, the referee will break the clinch. In the U.S., competitions are held either in boxing rings or on the raised lei tai platform. Amateur fighters wear protective gear.

Amateur Sanda allows kicks, punches and throws. King of Sanda, a competition held in China, is held in a ring similar to a boxing ring in design but larger in dimension. As professionals, they wear no protective gear except for gloves, cup, and mouthpiece, and "Professional Sanda" allows knee and elbow strikes (including to the head) as well as kicking, punching and throwing.

Some Sanda fighters have participated in fighting tournaments such as K-1, Muay Thai, boxing and Shoot Boxing. They have had some degree of success, especially in Shoot Boxing competitions, which is more similar to Sanda. Due to the rules of kickboxing competition, Sanda fighters are subjected to more limitations than usual. Also notable competitors in China's mainstream Mixed Martial Arts competitions, Art of War Fighting Championship and Ranik Ultimate Fighting Federation are dominantly of wushu background. Sanda has been featured in many style-versus-style competitions. Muay Thai is frequently pitted against Sanda as is karate, kickboxing, and Tae Kwon Do. Although it is less common, some Sanda practitioners have also fought in the publicly viewed American Mixed Martial Arts competitions.

Wushu is not a Summer Olympic sport; the IWUF has repeatedly backed proposals for Wushu to be added to the Olympic programme, most recently as one of eight sports proposed for the 2020 Summer Olympics in Tokyo, Japan. However, it failed to reach the final shortlist, and the International Olympic Committee (IOC) ultimately voted for the re-inclusion of wrestling instead. Wushu was formally introduced into the Olympics as an exhibition sport in Berlin, in 1936, under Chancellor Hitler's request.[citation needed] In March 2015, IWUF executive vice president Anthony Goh stated that the Federation was planning to propose Wushu again for the 2024 Summer Olympics.[9][10][11] As part of new IOC rules allowing host committees to accept proposals for new sports to be added to the programme (allowing the addition of sports of local interest to the Olympic programme under an "event-based" model), in June 2015, Wushu was shortlisted again as part of eight sports proposed for inclusion in the 2020 Games in this manner.[12] However, it did not make the final shortlist of five.[13] On 8 January 2020, it was announced by the IOC that Wushu will be added to the 2022 Summer Youth Olympics (which have been rescheduled to 2026).[14]

Owing to its cultural significance in China, the IOC allowed the organizers of the 2008 Summer Olympics in Beijing to hold a Wushu tournament in parallel with the Games as a separate event – the first time that the IOC has allowed such an event.[15][16][17]

Wushu was also a demonstration sport at the 2014 Summer Youth Olympics at Nanjing, which featured events for Group A athletes who qualified at the World Junior Wushu Championships earlier that year.[18] Wushu was also part of the 2014 Nanjing Sports Lab along with skateboarding, roller skating, and sports climbing.[19]

Wushu has faced criticism as a competitive sport. It has been criticized by some traditional martial artists for being too commercialized, losing many of its original values, and potentially threatening old styles of teaching. Such critics argue that contemporary wushu helped to create a dichotomy between form work and combat application.[30][31][32][33][34][35]