Flagpoles and flags of the World Taekwondo and of the Korean Taekwondo Association at the Kukkiwon in Seoul, South Korea

World Taekwondo, called the World Taekwondo Federation until June 2017, is the international federation governing the sport of taekwondo and is a member of the Association of Summer Olympic International Federations (ASOIF).[2] The body was renamed in June 2017 to avoid the "negative connotations" of the previously used initials WTF.[3][4]

World Taekwondo was established on May 28, 1973 at its inaugural meeting held at the Kukkiwon with participation of 35 representatives from around the world. There are now 208 member nations. Since 2004, Choue Chung-won has been the president of World Taekwondo, succeeding the first president, Kim Un-yong.

Taekwondo is one of the most systematic and scientific Korean traditional martial arts, that teaches more than physical fighting skills. It is a discipline that shows ways of enhancing our spirit and life through training our body and mind. Today, it has become a global sport that has gained an international reputation, and stands among the official games in the Olympics.[5]

World Taekwondo was established on May 28, 1973, at the inaugural meeting held at the Kukkiwon with participation of 35 representatives from the world after it separated from the International Taekwon-Do Federation because of political reasons. At that time, Un Yong Kim was elected president for a four-year term. One of the main Constituents of World Taekwondo, the Secretariat was formed on June 3, 1973 and began operating. On October 8, 1974 World Taekwondo was affiliated to the General Association of International Sports Federations (GAISF), now SportAccord. Until the 1980s, the European (May, 1976), the Asian (October, 1976), the Pan American (September, 1978) and the African (April, 1979) Taekwondo Unions inaugural meetings were held, while Oceania’s Taekwondo Union was not recognized as the 5th Continental Union of World Taekwondo until July 16, 2005. The recognition of the IOC towards World Taekwondo at its 83rd session in Moscow on July 17, 1980, was the cornerstone for their Cooperation. Thereupon Taekwondo participated in the 24th Olympiad at Changchung Gymnasium in Seoul, Korea as well as the 25th Olympiad at the Palau Blaugrana in Barcelona, Spain as a demonstration sport. In recognition of his contribution to the Olympic Movement Un Yong Kim was awarded the Order of Commander by Prince Rainier of Monaco on September 21, 1993. Moreover, Taekwondo was adopted as an official sport of the 2000 Summer Olympics at the 103rd IOC session in Paris, France, on September 4, 1994. Half a year later, on February 15, 1995 World Taekwondo was affiliated with the Association of Summer Olympic International Federations (ASOIF) as a provisional member. After the first appearance of Taekwondo as an Olympic Sport in the 2000 Summer Olympics, the IOC executive board confirms Taekwondo as an Olympic Sport for the 2004 Summer Olympics on December 11–13, 2000. Furthermore, the inclusion of taekwondo in the 2008 Summer Olympics was confirmed on November 29, 2002 at the 114th IOC session held in Mexico City. On February 15, 2004 the Vice President (Italy) Sun Jae Park was elected as Acting President of World Taekwondo due to the resignation of the founding President Un Yong Kim from the presidency of World Taekwondo. Four month later Chung Won Choue was elected as new President of World Taekwondo at the extraordinary General Assembly on June 11, 2004. Taekwondo was confirmed as program of the 2012 Summer Olympics on July 8, 2005.[8]

As of 2021, the global membership of World Taekwondo stands at 210 national member associations, spanning five continents.[10] 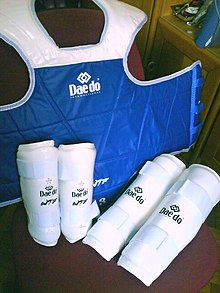 Under World Taekwondo and Olympic rules, sparring is a full-contact event and takes place between two competitors on a matted 8 meter octagon. At the end of three rounds, the athlete with the most points is declared the winner. A tie, however, results in an additional round, known as "Golden Point". If no point is scored during the Golden Point, the player with the most registers on the PSS is declared the winner. If one athlete is knocked out, or is otherwise unable to continue as a result of a legal technique by his opponent, the other athlete is automatically awarded the victory.[15]

The competition sparring rules were updated by World Taekwondo General Assembly in November 2016 in order to upgrade the sport so that it "dazzles and excites." Changes include encouraging more offensive actions with modifications to some of the point scoring and by disallowing certain leg blocks, elimination of mid-game interruptions, and improvements that simplify penalty assessment and foster better officiating.[16] These new rules took effect in January 2017.

Beginning in 2009, a kick or punch that makes contact with the opponent's hogu (the body guard that functions as a scoring target) scores one point; if a kick to the hogu involved a technique that includes fully turning the attacking competitor's body, so that the back is fully exposed to the targeted competitor during execution of the technique (spinning kick), an additional point is awarded; a kick to the head scores three points; as of October 2010 an additional point is awarded if a turning kick was used to execute this attack.[17] Punches to the head are not allowed. As of March 2010, no additional points are awarded for knocking down an opponent (beyond the normal points awarded for legal strikes).

The referee can give penalties (called "gam-jeom") at any time for rule-breaking, such as hitting an area not recognized as a target, falling, or stalling the match.

Until 2008, if one competitor gained a 7-point lead over the other, or if one competitor reached a total of 12 points, then that competitor was immediately declared the winner and the match ended. These rules were abolished by World Taekwondo at the start of 2009. In October 2010 World Taekwondo reintroduced a point gap rule. Under the new rule if a competitor has a 12-point lead at the end of the second round or achieves a 12-point lead at any point in the third round then the match is over and the athlete in the lead is declared the winner.[17]

As of the rules established in 2017, it has been arranged a new grading for competitions that will award points to the best placed athletes. Previously the maximum was G10, now it was doubled to G20.[18] The "G" value of a tournament is used to calculate how many points an athlete is awarded for winning a tournament. For example the Olympics as a G-20 tournament is worth five times as many points to the athlete as a Continental Championship (a G-4 tournament).[19] To compete on a WT Ranking-Points Competition the athletes need a Global License, which allows them to secure points on any country that hosts a tournament and it's affiliated with WT.[20]

The points awarded to the athletes are given within the following formula:

Where, generally, excluding the Summer Olympics where players tie at the same place due to the repechages:

Thereafter (generally) the percentage used is 70% rather than 60%

An athlete places 3rd at a G-8 event. Then the athlete is awarded:

When an athlete is awarded points at a Ranking-Point Tournament, those points remain attached to that athlete for four years. During a four-year period, points are deducted from the athletes rank after each completed year by 25% of the initial points.