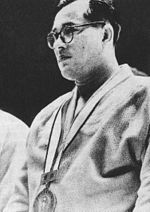 The 1965 World Judo Championships were held in Rio de Janeiro, Brazil, and weight classes were implemented for the first time with the addition of the −68 kg, −80 kg, and +80 kg categories. Judo had become an Olympic sport at the 1964 Summer Olympics held in Tokyo, and a permanent sport after a brief absence at the 1968 Summer Olympics.

There are currently 16 tournaments in the world championships, with 8 weight classes for each gender.

The world championships have been held in every continent except Oceania and Antarctica.


Updated after the 2019 World Judo Championships.

a^ Unlike in 2013, Majlinda Kelmendi did not compete at the 2014 World Judo Championships under the Kosovo flag but under the International Judo Federation flag, as Russia does not recognise Kosovo's independence. Kosovo is the subject of a territorial dispute between the Republic of Kosovo and the Republic of Serbia. The Republic of Kosovo unilaterally declared independence on 17 February 2008. Serbia continues to claim it as part of its own sovereign territory. The two governments began to normalise relations in 2013, as part of the 2013 Brussels Agreement. Kosovo is currently (this note self-updates) recognized as an independent state by 98 out of the 193 United Nations member states. In total, 113 UN member states recognized Kosovo at some point, of which 15 later withdrew their recognition.
b^ At the 2018 World Championships, judokas from North Korea and South Korea completed for unified Korean team and won bronze medals in the Mixed team competition.

Boldface denotes active judokas and highest medal count among all judokas (including these who not included in these tables) per type.