Type of pole weapon with a curved single-edged blade 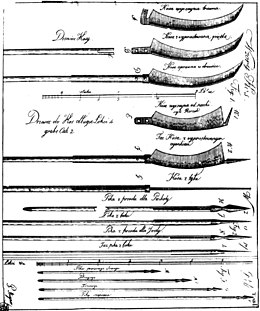 A war scythe or military scythe is a form of pole weapon with a curving single-edged blade with the cutting edge on the concave side of the blade. Its blade bears some superficial resemblance to that of an agricultural scythe from which it likely evolved, but the war scythe is otherwise unrelated to agricultural tools and is a purpose-built infantry melee weapon. The blade of a war scythe has regularly proportioned flats, a thickness comparable to that of a spear or sword blade, and slightly curves along its edge as it tapers to its point. This is very different from farming scythes, which have very thin and irregularly curved blades, specialised for mowing grass and wheat only, unsuitable as blades for improvised spears or polearms.

Compared to a fauchard (which is believed to have evolved from the war scythe), the blade of the war scythe has the cutting edge on the concave side like the agricultural tool whereas the fauchard has the edge along the convex side.[1]

As an infantry weapon, the military scythe had practical applications both in offensive actions against enemy infantry and as a defensive measure against enemy cavalry. 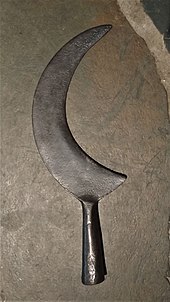 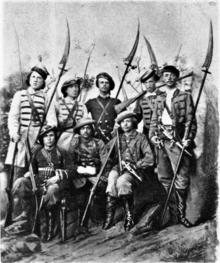 Farming tools such as the scythe and pitchfork have frequently been used as a weapon by those who could not afford or did not have access to more expensive weapons such as pikes, swords, or later, guns. Scythes and pitchforks were stereotypically carried by angry mobs or gangs of enraged peasants.[2] The process usually involved reforging the blade of a scythe at a 90 degree angle, strengthening the joint between the blade and the shaft with an additional metal pipe or bolts and reinforcing the shaft to better protect it against cuts from enemy blades.[citation needed] At times, instead of a scythe blade, a blade from a hand-operated chaff cutter was used.

War scythes were a popular weapon of choice and opportunity of many peasant uprisings throughout history. The ancient Greek historian Xenophon describes in his work (Anabasis) the chariots of Artaxerxes II, which had projecting scythes fitted. Later, Jan Žižka's Hussite warriors, recruited mostly from peasantry, used modified scythes. Called originally 'kůsa -scythe' and later "sudlice", it doubled as both a stabbing and cutting weapon, developing later into the "ušatá sudlice"—Bohemian earspoon, more suitable for combat—thanks to side spikes (ears), acting as end stops, it did not penetrate too deep, and so was easier to draw from fallen foes. War scythes were widely used by Polish and Lithuanian peasants during revolts in the 18th and 19th centuries.[citation needed] Polish peasants used war scythes during the 17th-century Swedish invasion (The Deluge). In the 1685 battle of Sedgemoor, James Scott, 1st Duke of Monmouth, fielded a 5000 strong peasant unit armed with war scythes. They were used in the 1784 Transylvanian peasants' Revolt of Horea, Cloşca and Crişan, in the war in the Vendée by royalist peasant troops, in the 1st War of Schleswig in 1848 in Denmark, and again in various Polish uprisings: the Kościuszko Uprising in 1794 and the battle of Racławice, in which scythe wielders successfully charged and captured Russian artillery. In that year Chrystian Piotr Aigner published a field manual, Short Treatise on Pikes and Scythes, detailing the training and operation of scythe-equipped forces, the first and probably only such book in the history of warfare. War scythes were later used in the November Uprising in 1831, January Uprising in 1863, and Silesian Uprising in 1921. The description of a fighting unit as "scythemen" was used in Poland as late as 1939; however, the Gdynia "kosynierzy" were armed with hunting guns rather than scythes.

As a pole weapon, the war scythe is characterised by long range and powerful force (due to leverage). They could be used, depending on construction and tactics, to make slashing or stabbing attacks, and with their uncommon appearance and considerable strength could have a psychological impact on an unprepared enemy. However, like most pole weapons, their disadvantages were weight (which could quickly exhaust the user) and slow speed. After the German Peasants' War during 1524–1525, a fencing book edited by Paulus Hector Mair described in 1542 techniques how to fence using a scythe.[3]