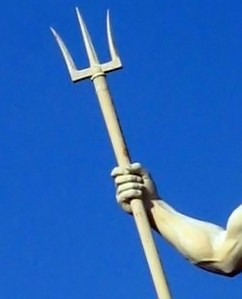 A trident /ˈtraɪdənt/ is a three-pronged spear. It is used for spear fishing and historically as a polearm. 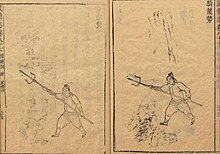 Illustration of a trident user from the Wubei Zhi, late 16th to early 17th century

The Greek equivalent is τρίαινα (tríaina), from Proto-Greek trianja, meaning "threefold". The Greek term does not imply three of anything specific, and is vague about the shape, thus the assumption it was originally of "trident" form has been challenged.[1]

The Sanskrit name for the trident, trishula, is a compound of tri त्रि for "three" and śūla शूल for "thorn", calling the trident's three prongs "thorns" rather than "teeth".[citation needed] 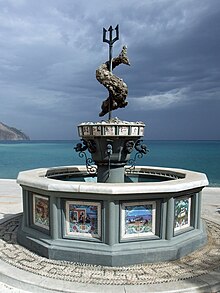 The trident is associated with the sea god Poseidon. This divine instrument is said to have been forged by the cyclopes.[3]

Poseidon struck a rock with his trident, causing a sea (or a saltwater spring, called the Erechtheis) to appear nearby on the Acropolis in Athens.[4][5] And according to Roman sources, Neptune struck the earth with the trident to produce the first warhorse.[6]

Poseidon, as well as being the god of the sea, was also known as the "Earth Shaker",[7] believed to cause earthquakes;[8][a] some commentators have extrapolated that the god would have used the trident to cause them,[9] possibly by striking the earth.[citation needed]

In the Renaissance artist Gian Bernini's sculpture Neptune and Triton (1622–23), Neptune is posed holding a trident turned downwards, and is thought to reenact a scene from Aeneid or Ovid's Metamorphoses where he is calming the waves to aid Aeneas's ships.[10]

In later Greek and Roman art and literature, other sea deities and their attendants have been depicted holding the trident.

Poseidon's consort Amphitrite is often identified by some marine attribute other than a trident, which she never carries according to some scholars, though other commentators have disagreed.[11][13]

Turning to the retinue or a train of beings which follow the sea deities (the marine thiasos) the Tritons (mermen) may be seen bearing tridents.[14] Likewise, the Old Man of the Sea (halios geron) and the god Nereus are seen holding tridents.[14] Tritons, other mermen, and the Nereides can also carry rudders, oars, fish, or dolphins.[14]

Oceanus normally should not carry a trident, allowing him to be clearly distinguished from Poseidon. However, there is conflation of the deities in Romano-British iconography, and examples exist where the crab-claw headed Oceanus also bears a trident.[16][17] Oceanus holding a trident has been found on Romano-British coinage as well.[b][18]

Some amorini have been depicted carrying tiny tridents.[c][19]

The trident is even seen suspended like a pendant on a dolphin in Roman mosaic art.[d][20]

In Hindu legends and stories Shiva, the Hindu god uses a trishula as his principal weapon. The trident is also said to represent three gunas mentioned in Indian Vedic philosophy namely sāttvika, rājasika, and tāmasika.[citation needed] The goddess Kali is sometimes portrayed with a trident as well.[21]

A weapon of South-East Asian (particularly Thai) depiction of Hanuman, a character of Ramayana.[citation needed]

In religious Taoism, the trident represents the Taoist Trinity, the Three Pure Ones. In Taoist rituals, a trident bell is used to invite the presence of deities and summon spirits, as the trident signifies the highest authority of Heaven.[citation needed]

A fork Jewish priests (Kohanim) used to take their portions of offerings.[22]

A trident in the coat of arms of Riistavesi

In heraldry within the UK, the trident is often held by the figure identified as either a Neptune or a triton,[e][23][24] or a merman.[f][25]

The trident held up by an arm is depicted on some coats-of-arms.[26] 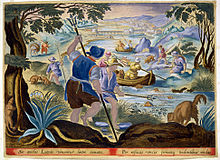 In Ancient Greece, the trident was employed as a harpoon for spearing large fish, especially tuna fishing.[27]

Tridents used in modern spear-fishing usually have barbed tines, which trap the speared fish firmly. In the Southern and Midwestern United States, gigging is used for harvesting suckers, bullfrogs, flounder and many species of rough fish.[28]

It has been used by farmers as a decorticator to remove leaves, seeds and buds from the stalks of plants such as flax and hemp.[citation needed] A form of trident is used by the gardians in the Camargue of southern France for herding cattle.[citation needed]

In Ancient Rome tridents (Latin: tridens or fuscina) were used by a type of gladiator called a retiarius or "net fighter". The retiarius was traditionally pitted against a secutor, and cast a net to wrap his adversary and then used the trident to fight him.[29][30]

The trident, known as dangpa, is used as a weapon in the 17th- to 18th-century systems of Korean martial arts.[citation needed]

The glyph or sigil of the planet Neptune (♆), which alludes to the trident, is used in astronomy and astrology.

The flag of Barbados incorporates a Trident. 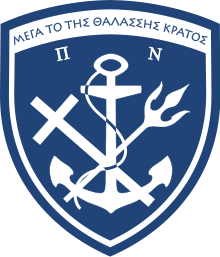 Emblem of the Hellenic Navy

A number of structures in the biological world are described as trident in appearance. Since at least the late 19th century the trident shape was applied to certain botanical shapes; for example, certain orchid flora were described as having trident-tipped lips in early botanical works.[31] Furthermore, in current botanical literature, certain bracts are stated to have a trident-shape (e.g. Douglas-fir).[32]