In martial arts and combat sports, a takedown is a technique that involves off-balancing an opponent and bringing him or her to the ground with the attacker landing on top. The process of quickly advancing on an opponent and attempting a takedown is known as shooting for a takedown, or simply shooting. Takedowns are usually distinguished from throws by amplitude and impact, where the purpose of a throw is to outright eliminate the opponent while purpose of a takedown is to bring the opponent down on the ground, assume a dominant and then proceed to finish them with jointlocks, chokeholds or ground and pound. In rulesets of many sports such as Judo and Sambo, a well executed throw will end the match (with the idea being that if the match did not happen on a tatami, the one who was thrown would be unable to stand back up) while the match will continue on the ground if a takedown is used instead. Takedowns are featured in all forms of wrestling and Judo.

The leg trip is a technique in which the combatant uses his or her own leg(s) to off-balance an opponent, hence causing the opponent to fall to the ground. Leg trips are often integrated into more complex takedown techniques, and are also important in many throws. Takedown techniques that are pure leg trips usually involve controlling the body of the opponent, and impeding or destabilizing one or both of the opponents legs. Leg trips are featured in for instance freestyle wrestling, judo, sumo, and shuai jiao while being an illegal technique in Greco-Roman wrestling.[1]

The scissor kick takes down an opponent by wrapping one's legs around the opponent.

There are several varieties of single leg takedowns. Some involve picking up and holding the leg by the ankle and are often known as ankle picks, while other varieties include the high crotch, in which the leg is held high up in the opponent's crotch area. The leg can be attacked either across the body ("inside") or from away from the body ("outside"). Single leg takedowns can also be executed in combination with a leg trip to the other leg, which additionally destabilizes the opponent.

Single leg takedowns can be countered by sprawling or by hooking the lifted foot in the crotch of the aggressor (so it cannot be lifted further and to maintain a distance from the aggressor), and, where allowed, in combination with knee strikes to the head of the opponent.[2]

In judo and other martial arts, there are many classifications of different types of single leg takedowns. Variants of the high crotch correspond to sukui nage (掬投, "scoop throw"[3]), where the opponent is lifted up from the ground,[4] while the typical forward pushing single leg takedown is classified as morote gari[5] (双手刈, "both hands scoop"[3]). Some techniques are more specific, for instance kibisu gaeshi (踵返, "heel trip reversal"[3]), which is an ankle pick where the heel is grabbed, scooped up and the opponent is pushed and thrown immediately. In kuchiki taoshi (朽木落, "one hand drop"[6]), the opponent's leg is grabbed, pulled up, and used to push the opponent down to the ground in a split second.[7] The technique was banned in judo competition by the International Judo Federation in 2010 except as a counter or combination.[8] 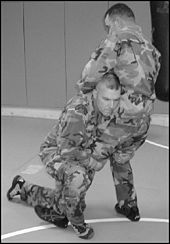 The double leg takedown is in judo also referred to as morote-gari,[5] although some hold that a double leg takedown where the opponent is lifted into the air or swept sideways should be referred to as sukui-nage.[5] Morote-gari, despite having been used by judokas for a very long time and being approved of by Jigoro Kano himself, was not accepted until 1982 by the Kodokan[5] as an official judo technique. Being dismissed by certain traditionalists,[10] the technique was banned in competition by the International Judo Federation in 2010 except as a counter or combination.[11]

Another form of a double leg takedown is the double leg and trip, in which the person shoots in and while holding both legs swings one of his legs around and pushes forward on the opponent while tripping the opponent's leg out from under him.

In a duckunder, the wrestler pulls the opponent's elbow forward and away from the body, lowers his own head, and ducks under the opponent's arm in an effort to get behind or at least beside the opponent; from this position the opponent can be taken down by lifting and throwing or by a leg trip.

A single overhook, or whizzer, involves putting an arm over the opponent's arm and encircling it. It can be used as a takedown maneuver by putting substantial weight on the targeted arm while pulling the opponent's other arm across his body, and eventually stepping over behind the opponent.

The spin-around is often used as a counter to an opponent's attempt at a single- or double-leg takedown. When the opponent shoots for the legs, the targeted wrestler sprawls his legs part way back and then quickly moves around behind the opponent.