Japanese sword worn by the samurai
For other uses, see Tachi (disambiguation).
Sword

A tachi (太刀) is a type of traditionally made Japanese sword (nihonto) worn by the samurai class of feudal Japan. Tachi and katana generally differ in length, degree of curvature, and how they were worn when sheathed, the latter depending on the location of the mei, or signature, on the tang. The tachi style of swords preceded the development of the katana, which was not mentioned by name until near the end of the twelfth century.[1] Tachi were the mainstream Japanese swords of the Kotō period between 900 and 1596.[2] Even after the Muromachi period (1336–1573), when katana became the mainstream, tachi were often worn by high-ranking samurai.

The production of swords in Japan is divided into specific time periods:[3]

The predecessor of the Japanese sword has been called Warabitetō (ja:蕨手刀).[4][5] In the middle of the Heian period (794–1185), samurai improved on the Warabitetō to develop Kenukigata-tachi (ja:毛抜形太刀) -early Japanese sword-.[4] Kenukigata-tachi, which was developed in the first half of the 10th century, has a three-dimensional cross-sectional shape of an elongated pentagonal or hexagonal blade called shinogi-zukuri and a gently curved single-edged blade, which are typical features of Japanese swords. There is no wooden hilt attached to kenukigata-tachi, and the tang (nakago) which is integrated with the blade is directly gripped and used. The term kenukigata is derived from the fact that the central part of tang is hollowed out in the shape of a tool to pluck hair (kenuki).[6] 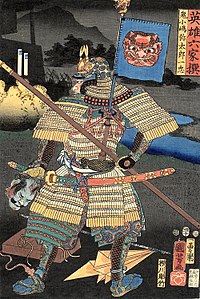 A back view of a samurai in armor carrying a tachi sword, on his back is a sashimono, holding a spear and a severed head.

In the tachi developed after kenukigata-tachi, a structure in which the hilt is fixed to the tang (nakago) with a pin called mekugi was adopted. As a result, a sword with three basic external elements of Japanese swords, the cross-sectional shape of shinogi-zukuri, a gently curved single-edged blade, and the structure of nakago, was completed.[6][7] Its shape may reflect the changing form of warfare in Japan. Cavalry were now the predominant fighting unit and the older straight chokutō were particularly unsuitable for fighting from horseback. The curved sword is a far more efficient weapon when wielded by a warrior on horseback where the curve of the blade adds considerably to the downward force of a cutting action.[7] According to author Karl F. Friday, before the 13th century there are no written references or drawings etc. that show swords of any kind were actually used while on horseback.[8] However, According to Yoshikazu Kondo, bow and arrows were certainly the main weapons used in battles fought on horseback, but from around the Genpei War in the 12th century, the use of tachi on horseback increased.[9] Early models had uneven curves with the deepest part of the curve at the hilt. As eras changed the center of the curve tended to move up the blade.[10]

Okanehira, by Kanehira. Ko-Bizen (old Bizen) school. 12th century, Heian period, National Treasure, Tokyo National Museum. Okanehira, together with Dojikiri, is considered one of the best Japanese swords in terms of art and is compared to the yokozuna (the highest rank of a sumo wrestler) of Japanese swords.[11]

By the 11th century during the Heian period, tachi had already been exported to neighboring countries in Asia. For example, in the poem "The Song of Japanese Swords" Ouyang Xiu, a statesman of the Song Dynasty in China, described Japanese swords as "It is a treasured sword with a scabbard made of fragrant wood covered with fish skin, decorated with brass and copper, and capable of exorcising evil spirits. It is imported at a great cost.".[12][13]

The Mongol invasions of Japan in the 13th century during the Kamakura period facilitated a change in the designs of Japanese swords. The swordsmiths of the Sōshū school represented by Masamune studied tachi that were broken or bent in battle, developed new production methods, and created innovative Japanese swords. They forged the blade using a combination of soft and hard steel to optimize the temperature and timing of the heating and cooling of the blade, resulting in a lighter but more robust blade. They also made the curve of the blade gentle, lengthened the tip linearly, widened the width from the cutting edge to the opposite side of the blade, and thinned the cross section to improve the penetration and cutting ability of the blade.[15][16]

Traditionally, yumi (bows) were the main weapon of war in Japan, and tachi and naginata were used only for close combat. The Ōnin War in the late 15th century in the Muromachi period expanded into a large-scale domestic war, in which employed farmers called ashigaru were mobilized in large numbers. They fought on foot using katana shorter than tachi. In the Sengoku period (period of warring states) in the late Muromachi period, the war became bigger and ashigaru fought in a close formation using yari (spears) lent to them. Furthermore, in the late 16th century, tanegashima (muskets) were introduced from Portugal, and Japanese swordsmiths mass-produced improved products, with ashigaru fighting with leased guns. On the battlefield in Japan, guns and spears became main weapons in addition to bows. Due to the changes in fighting styles in these wars, the tachi and naginata became obsolete among samurai, and the katana, which was easy to carry, became the mainstream. The dazzling looking tachi gradually became a symbol of the authority of high-ranking samurai.[19][20][21]

From the 15th century, low-quality swords were mass-produced under the influence of the large-scale war. These swords, along with spears, were lent to recruited farmers called ashigaru and swords were exported . Such mass-produced swords are called kazuuchimono, and swordsmiths of the Bisen school and Mino school produced them by division of labor.[19][22] The export of Japanese sword reached its height during the Muromachi period when at least 200,000 swords were shipped to Ming Dynasty China in official trade in an attempt to soak up the production of Japanese weapons and make it harder for pirates in the area to arm. In the Ming Dynasty of China, Japanese swords and their tactics were studied to repel pirates, and wodao and miaodao were developed based on Japanese swords.[12][23][24] 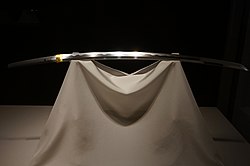 From this period, the tang (nakago) of many old tachi were cut and shortened into katana. This kind of remake is called suriage.[25] For example, many of the tachi that Masamune forged during the Kamakura period were converted into katana, so his only existing works are katana and tantō.[26]

In later Japanese feudal history, during the Sengoku and Edo periods, certain high-ranking warriors of what became the ruling class would wear their sword tachi-style (edge-downward), rather than with the scabbard thrust through the belt with the edge upward.[27] This style of swords is called handachi, "half tachi". In handachi, both styles were often mixed, for example, fastening to the obi was katana style, but metalworking of the scabbard was tachi style.[28]

In the Sintō period from around 1596 in the Azuchi-Momoyama period, the traditional techniques of the Kotō period had been lost, and no one was able to exactly reproduce the tachi of the Kamakura period. However, in 2014, Kunihira Kawachi succeeded in reproducing a tachi from the Kamakura period and received the Masamune Prize, the highest honor as a swordsmith. On the tachi he forged, midare-utsuri (a pattern of hazy white shadows between hamon and shinogi) that is characteristic of the Bizen school in the Kamakura period was reproduced. Nobody could have won the Masamune Prize without extraordinary achievements, and in the field of tachi and katana no one has won until Kawauchi for 18 years.[30] 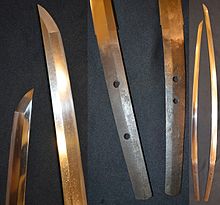 Comparison between the tangs (nakago) of a katana (left) and tachi (right). The signature (mei) on the tachi tang was inscribed in such a way that it would always be on the side of the tang facing outward when either sword was worn.

With a few exceptions, katana and tachi can be distinguished from each other if signed by the location of the signature (mei) on the tang. In general the signature should be carved into the side of the tang that would face outward when the sword was worn on the wielder's left waist. Since a tachi was worn cutting edge down, and the katana was worn cutting edge up the mei would be in opposite locations on the tang of both types of swords.[31]

An authentic tachi had an average cutting edge length (nagasa) of 70–80 cm (27+9⁄16–31+1⁄2 in) and compared to a katana was generally lighter in proportion to its length, had a greater taper from hilt to point, was more curved and had a smaller point area.[32]

Unlike the traditional manner of wearing the katana, the tachi was worn hung from the belt with the cutting-edge down,[33] and was most effective when used by cavalry.[34] Deviations from the average length of tachi have the prefixes ko- for "short" and ō- for "great, large" attached. For instance, tachi that were shōtō and closer in size to a wakizashi were called kodachi. The longest 'tachi (considered a 15th-century ōdachi) in existence is 3.7 metres (12 ft) in total length with a 2.2 metres (7 ft 3 in) blade, but believed to be ceremonial. In the late 1500s and early 1600s many old surviving tachi blades were converted into katana by having their original tangs cut (o-suriage), which meant the signatures were removed from the swords.[35]

Generally, the blade and the sword mounting of Japanese swords are displayed separately in museums, and this tendency is remarkable in Japan. For example, the Nagoya Japanese Sword Museum "Nagoya Touken World", one of Japan's largest sword museums, posts separate videos of the blade and the sword mounting on its official website and YouTube.[38][39]