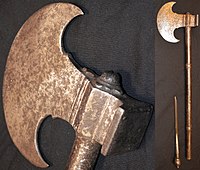 Indian (Sind) tabar battle axe, late 18th century or earlier, crescent shape 5-inch-long head with a square hammer opposite of the blade, 22-inch-long steel haft, the end of the haft unscrews to reveal a 5-inch slim blade. Heavily patinated head and handle with traces of engraving.

The tabar (also called tabarzin, which means "saddle axe" [in persian], Modern Turkish: teber) is a type of battle axe. The term tabar is used for axes originating from the Ottoman Empire, Persia, India and surrounding countries and cultures. As a loanword taken through Iranian Scythian, the word tabar is also used in most Slavic languages as the word for axe[1] (e.g. Russian: топор).

The tabarzin (saddle axe) (Persian: تبرزین; sometimes translated "saddle-hatchet") is the traditional battle axe of Persia (Iran). It bears one or two crescent-shaped blades. The long form of the tabar was about seven feet long, while a shorter version was about three feet long. What makes the Persian axe unique is the very thin handle, which is very light and always metallic.[2] The tabarzin was sometimes carried as a symbolic weapon by wandering dervishes (Muslim ascetic worshippers).[citation needed] The word tabar for axe was directly borrowed into Armenian as tapar (Armenian: տապար) from Middle Persian tabar,[3][4] as well as into Proto-Slavic as "topor" (*toporъ), the latter word known to be taken through Scythian,[5][1] and is still the common Slavic word for axe.[1]

During the 17th and 18th centuries, the tabar battle axe was a standard weapon of the mounted warriors of Punjab, Sikh Khalsa army and what is now modern day India and Pakistan. Made entirely of metal or with a wood haft, it had a strongly curved blade and a hammer-headed poll and was often decorated with scroll work. Sometimes a small knife was inserted in the tabar's hollow haft.

According to Adam Metz's "Islamic Civilization in the Fourth Century of the Hegira," the tabar was frequently not only a weapon used by police chiefs (Sahib al-Shurta), but also a mark of office for them.