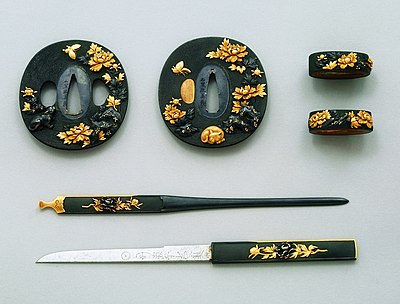 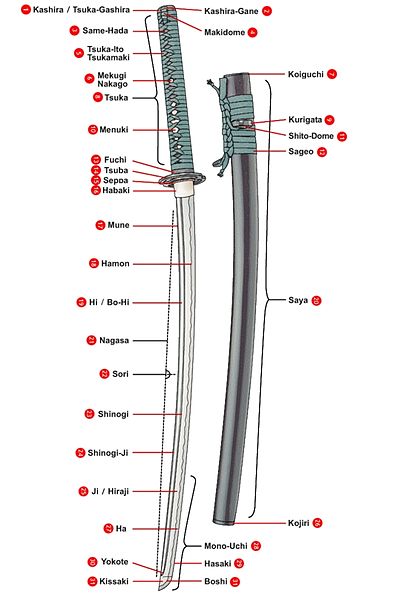 A diagram of a katana and koshirae with components identified.

A shirasaya (白鞘), "white scabbard",[2] is a plain wooden Japanese sword saya (scabbard) and tsuka (hilt), traditionally made of wood and used when a blade was not expected to see use for some time and needed to be stored. They were externally featureless save for the needed mekugi-ana[3] to secure the nakago (tang), though sometimes sayagaki (blade information) was also present. The need for specialized storage is because prolonged koshirae mounting harmed the blade, owing to factors such as the lacquered wood retaining moisture and encouraging corrosion.

Such mountings are not intended for actual combat, as the lack of a tsuba (guard) and proper handle wrappings were deleterious; as such they would likely never make their way onto a battlefield. However, there have been loosely similar "hidden" mountings, such as the shikomizue. Also, many blades dating back to earlier Japanese history are today sold in such a format, along with modern-day reproductions; while most are purely decorative replicas, a few have functional blades.[4]

The word koshirae is derived from the verb koshiraeru (拵える), which is no longer used in current speech. More commonly "tsukuru" is used in its place with both words meaning to "make, create, manufacture." A more accurate word is tōsō (刀装), meaning sword-furniture, where tōsōgu (刀装具) are the parts of the mounting in general, and "kanagu" stands for those made of metal. Gaisō (外装) are the "outer" mountings, as opposed to tōshin (刀身), the "body" of the sword.

Koshirae were meant not only for functional but also for aesthetic purposes, often using a family mon (crest) for identification.

The tachi style koshirae is the primary style of mounting used for the tachi, where the sword is suspended edge-down from two hangers (ashi) attached to the obi.[5] The hilt often had a slightly stronger curvature than the blade, continuing the classic tachi increase in curvature going from the tip to the hilt. The hilt was usually secured with two pegs (mekugi), as compared to one peg for shorter blades including katana. The tachi style koshirae preceded the katana style koshirae.

The han-dachi koshirae was worn katana-style but included some tachi related fittings such as a kabuto-gane instead of a kashira.

The aikuchi (合口 or 匕首) is a form of koshirae for small swords in which the hilt and the scabbard meet without a crossguard between them.[6] The word literally means ai ("meeting") + kuchi ("mouth; opening"), in reference to the way the hilt fits directly against the scabbard.[7][8] Originally used on the (a precursor to the wakizashi) to facilitate close wearing with armour,[6][9] it became a fashionable upper-class mounting style for a tantō (literally, "small sword", nowadays regarded as a dagger) from the Kamakura period onwards.

The shikomizue (仕込み杖, "prepared cane") or jotō (杖刀, "staff sword")[10] is a Japanese swordstick. It is most famous for its use by the fictional swordmaster Zatoichi. The sword blade was placed in a cane-like mounting (tsue) as concealment. These mountings are not to be confused with the Shirasaya (白鞘, "white scabbard"), which were just plain wooden mountings with no decoration other than (sometimes) a short description of the contents.

Some shikomi-zue also concealed metsubushi, chains, hooks, and many other things. Shikomi-zue could be carried in public without arousing suspicion, making them perfect tools for shinobi.

The kaiken is an 8–10 inch long, single- or double-edged dagger[11] without ornamental fittings housed in a plain mount, formerly carried by men and women of the samurai class in Japan. It was useful for self-defense indoors where the long katana and intermediate wakizashi were inconvenient. Women carried them in their kimono either in a pocket like fold or in the sleeve [12] for self-defense or for suicide by means of slashing the jugular veins and carotid artery in the left side of the neck.[13][14]

Saya (鞘) is the Japanese term for a scabbard, and specifically refers to the scabbard for a sword or knife. The saya of a koshirae (scabbards for practical use) are normally manufactured from very lightweight wood, with a coat of lacquer on the exterior. The wood is light enough that great care must be taken when drawing the sword; incorrect form may result in the blade of the sword slicing through the saya and injuring one or more fingers. Correct drawing and sheathing of the blade involves contacting the mune (the back of the blade) rather than ha (the edge) to the inside of the scabbard. The saya also has a horn knob (栗形, kurigata) on one side for attaching a braided cord (sageo), and may have a shitodome (mounting loop) to accent the kurigata as well as an end cap (小尻, kojiri) made from metal. Traditionally the koiguchi (the throat of the scabbard) and kojiri (the chape) were made from buffalo horn.

The Saya is divided in parts:

A sageo (下緒 or 下げ緒) is a hanging cord made of silk, cotton or leather that is passed through the hole in the kurigata (栗形) of a Japanese sword's saya. There are a number of different methods for wrapping and tying the sageo on the saya for display purposes. Other uses for the sageo are tying the sword to the samurai and hojojutsu. The samurai felt the sageo formed a spiritual bond between them and the sword, and they were very particular about tying it correctly when the sword was not in use.[15]

The kurikata is a knob that is attached to the scabbard of a Japanese sword. The sageo (cord) that secures the saya of the sword to the obi (belt) goes through a hole in the kurikata.

Kogatana, a small utility knife that fits into a pocket on the scabbard, the kozuka is the decorative handle for the kogatana.

The kōgai is a spike for hair arranging that fits into a pocket on the saya.

The umabari is a small knife that is a variation of the kogatana, it fits into a pocket on the saya.

The tsuka is the hilt or handle of a Japanese sword.

The tsuka is divided in the following parts:

The menuki are ornaments on the tsuka (generally under the tsuka-ito); to fit into the palm for grip.

Samegawa is the ray skin used to cover or wrap the handle.

Tsuka-ito is the wrapping of the tsuka, traditionally silk but today more often cotton and sometimes, leather.

The kashira is the end cap (pommel) on the tsuka.

The tsuba (鍔, or 鐔) is usually a round (or occasionally squarish) guard at the end of the grip of bladed Japanese weapons, like the katana and its variations, tachi, wakizashi, tantō, naginata etc. They contribute to the balance of the weapon and to the protection of the hand. The tsuba was mostly meant to be used to prevent the hand from sliding onto the blade during thrusts as opposed to protecting from an opponent's blade. The chudan no kamae guard is determined by the tsuba and the curvature of the blade. The diameter of the average katana tsuba is 7.5–8 centimetres (3.0–3.1 in), wakizashi tsuba is 6.2–6.6 cm (2.4–2.6 in), and tantō tsuba is 4.5–6 cm (1.8–2.4 in).

During the Muromachi period (1333–1573) and the Momoyama period (1573–1603) Tsuba were more for functionality than for decoration, being made of stronger metals and designs. During the Edo period (1603–1868) there was peace in Japan so tsuba became more ornamental and made of less practical metals such as gold.

Tsuba are usually finely decorated, and nowadays are collectors' items. Tsuba were made by whole dynasties of craftsmen whose only craft was making tsuba. They were usually lavishly decorated. In addition to being collectors items, they were often used as heirlooms, passed from one generation to the next. Japanese families with samurai roots sometimes have their family crest (mon) crafted onto a tsuba. Tsuba can be found in a variety of metals and alloys, including iron, steel, brass, copper and shakudō. In a duel, two participants may lock their katana together at the point of the tsuba and push, trying to gain a better position from which to strike the other down. This is known as tsubazeriai (鍔迫り合い), lit. pushing tsuba against each other. Tsubazeriai is a common sight in modern kendō.

In modern Japanese, tsubazeriai (鍔迫り合い) has also come to mean "to be in fierce competition."

The seppa are washers used in front of and behind the tsuba to tighten the fittings. Seppa can be ornate or plain.

The habaki (鎺) is a piece of metal encircling the base of the blade of a Japanese sword. It has the double purpose of locking the tsuba (guard) in place, and to maintain the weapon in its saya (scabbard).

The importance of the habaki is seen in drawing the katana from the scabbard. It is drawn by grasping the scabbard near the top and pressing the guard with the thumb to emerge the blade just enough to unwedge the habaki from inside the scabbard in a process called koiguchi no kirikata (鯉口の切り方) "cutting the koiguchi". The blade, being freed, can be drawn out very quickly. This is known as koiguchi o kiru (鯉口を切る), nukitsuke (抜き付け), or tanka o kiru (啖呵を切る) "clearing the tanka". This is obviously an extremely aggressive gesture, since a fatal cut can be given in a fraction of a second thereafter (see iaidō). It is similar in connotation and effect as drawing back the hammer of a handgun, chambering a round on a pump-action shotgun, or pulling back and releasing the charging handle on other firearms.

The habaki will cause normal wear and tear inside the scabbard, and either a shim or a total replacement of the scabbard may be needed to remedy the issue as it will become too loose over time. Removing the habaki and oiling it after cutting or once every few months is recommended.