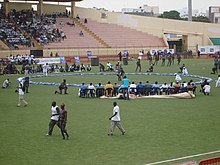 Senegalese wrestling match at the stade Demba Diop in Dakar

In Senegal, it takes its root from the wrestling tradition of the Wolof, Bambara and Serer people - formally a preparatory exercise for war among the warrior classes of the Wolof, Bambara and Serer people depending on the technique.[4][5] In Wolof tradition, wrestling is divided into different techniques with mbapate being one of them. In the Wolof language, "mbapate" means a Gala of simple wrestling without strikes which usually takes place at night. It was also an initiation rite among the Wolof and Serer people. The Serer word Njom derives from the Wolof and Serer common word of Jom. Wolof, Serer, Fula and the Mandingue languages of West Africa are in the same linguistic group, the Niger-Congo linguistic group (of Atlantic languages ). Jom in both Serer and Wolof means to have dignity, to have courage, to have “Jom”.[6][7] The Jom principle covers a huge range of values and beliefs including economic, ecological, personal and social values in Wolof and Serer societies. Wrestling stems from the branch of personal values of the Jom principle.[6] One of the most well known wrestlers in Senegambian history is Moustapha Gueye (a Wolof) from Fass, in Dakar. Another well known wrestler is Boukar Faye who was the ancestor of the Faye Matrilineal Serer dynasty of Sine and Saloum (both Kingdoms in present-day Senegal).[8] The njom wrestling spectacle was usually accompanied by the kim njom - the chants made by young Serer women in order to reveal their gift of "poetry" (ciid in Serer[9] ). The Wolof word for wrestling - Laamb, derives from a Wolof royal function called Fara-Lamb which was the name given to the Chief griot in the Wolof Kingdoms of Kajoor, Baol, Walo, and Djolof. The Fara-Lamb in Wolof society used to beat the drums during mbapat wrestling sessions. (Far or Fara is a radical shared by Wolof and Mandingue languages which share the same linguistic group of Atlantic Niger-Congo languages. The Wolof Fara-Lamb is a concept that migrated to the Serer Kingdoms of Sine and Saloum which were ruled for centuries by the Djolof empire, when the Djolof empire declined, its former vassal states replicated the same political and social systems of Djolof, often with the Wolof terminology intact. For example, the kings of the Serer in the two Serer kingdoms of Sine and Saloum were called Bour Sine and Bour Saloum, Bour is the Wolof word for king, which was used by the Wolof emperor of Djoloff, Buur-ba Jolof. The Fara Lamb of Cayor used beat the tam-tam of Kajoor during wrestling matches, the Fara Lamb of Sine used to beat the tam tam of Sine. The Wolof use two terms for wrestling, Mbapat and Lamb/ Laamb which is today the name by which Senegalese wrestling in general is known by.

The Serer use the term Njom for wrestling.[10] The lamb was part of the music accompaniment of wrestling in pre-colonial times as well as after Senegal's independence. It was also part of the Wolof Semb tradition (a conservative Wolof music repertoire, the progenitor of Mbalax[11][12][13]).

Transcending ethnic groups, the sport enjoys the status of national sport.[14] Traditionally, young men also used to fight as a distraction, to court wives, prove their manliness, and bring honor to their villages. Usually each wrestler (called mbër) performed a bàkk before the start of the combat.

In general, the Wolof word of bàkk (which could also be spelled as baku, bakku, bakkous) is an oral art performance that is used to boast about oneself in order to instill a sense of fear or reverence in the audience or rivals.[15] Bàkk is not only used in the context of wrestling but can also be used in political speeches or other encounters in which someone feels the need to brag about his accomplishments to receive admiration.[15] Not only is bàkk used to brag about oneself, but it can also be used to offer respect to one's elders. The performance of bàkk can be in narratives, praise songs, or poems. Bàkk is used to complement the wrestler's physical presence by adding artistic elegance and verbal cleverness. Wolof wrestlers use the bàakk to present themselves as exceptional and impressive.[15]

The oral art of the bàkk, used by the Senegalese wrestlers, has its history in griots. Historically, Wolof griots and griottes were singers tasked with relaying the eulogies of heroes and heroines who overcame hardships.[15] Griots were used to sing praises to kings, wrestlers, and nobles in general. Griots usually came from lower castes and their task of singing praise was unique. They would accompany wrestlers, who usually came from upper castes, to the arenas. In more contemporary times, Wolof wrestlers will now sing their own praises, which challenges the societal norm of praises only being sung by griots.[15]

In the 1980s Senegalese wrestler, Mame Gorgui (called “The Darling Child of Dakar”) performed a notable bàkk, which made him popular among the Senegalese people.[15] This famous bàkk was repeated often by children in Senegal and sang on the national radio on weekends during which combats took place.[15]

Today bàkk is very popular in the country as an indication of male athletic strength and ability.[16] Presently, wrestling is arranged by business-promoters who offer prizes for the winners. The 20,000-capacity in Dakar is the largest wrestling stadium by capacity in Senegal.[17]

The popularity of Senegalese wrestling has grown so big that TV stations have started picking up popular athletes to act in series due to their massive popularity.[18] 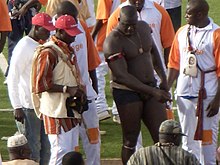 One of the main objectives is to throw the opponent to the ground by lifting him up and over, usually outside a given area. 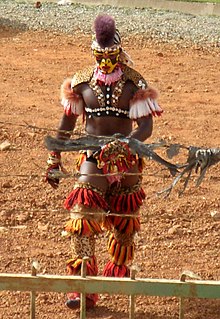 Senegalese wrestlers train extremely hard and may perform press ups and various difficult physical exercises throughout the day to build up their strength. However, while they believe strength is important, they also believe that there is an element of luck in the winner, and may perform rituals before a match to increase their chances. Common to Senegalese wrestlers is rubbing a foot on a stone or rubbing themselves with lotions or oils to increase "good luck".

Senegalese wrestlers, youth in specific, struggle with dropping out of school to pursue wrestling as well, prompting notable names in the sport to speak out against the issue saying their education is more important.[19]

In April 2008 a BBC documentary entitled Last Man Standing covered the lives of a group of British and American hopefuls at a boot camp in Senegal who took on Senegalese opponents.[20] Laamb was featured in the 2005 film L'Appel des arènes (English title Wrestling Grounds).

Since the 1950s, Senegalese Wrestling, like its counterparts in other areas of West Africa, has become a major spectator sport and cultural event[citation needed]. The champions of traditional wrestling events are celebrities in Senegal, with fighters such as Balla Gaye 2, Yékini (Yakhya Diop), Tyson (Mohamed Ndao), and Bombardier (Serigne Ousmane Dia) the best known.[24]

Pathe Mbeurou Askanewi Boye, also known as Big Pato, is the first ever Senegalese wrestler who is also a police officer.[25]