Period in the history of ancient southern India

The Sangam period or age (Tamil: சங்ககாலம், caṅkakālam ?), or the third Sangam period, is the period of history of ancient Tamil Nadu, Kerala and parts of Sri Lanka (then known as Tamilakam) spanning from c. 6th century BCE to c. 3rd century CE. It was named after the famous Sangam academies of poets and scholars centered in the city of Madurai.

In Old Tamil language, the term Tamilakam (Tamiḻakam தமிழகம், Purananuru 168. 18) referred to the [1]whole of the ancient Tamil-speaking area, corresponding roughly to the area known as southern India today, consisting of the territories of the present-day Indian states of Tamil Nadu, Kerala, parts of Andhra Pradesh, parts of Karnataka and northern Sri Lanka[2][3] also known as Eelam.[4][5]

According to Tamil legends, there were three Sangam periods, namely Head Sangam, Middle Sangam and Last Sangam period. Historians use the term Sangam period to refer the last of these, with the first two being legendary. So it is also called Last Sangam period (Tamil: கடைச்சங்க பருவம், Kadaiccanga paruvam ?),[6] or Third Sangam period (Tamil: மூன்றாம் சங்க பருவம், Mūnṟām sanka paruvam ?). The Sangam literature is thought to have been produced in three Sangam academies of each period. The evidence on the early history of the Tamil kingdoms consists of the epigraphs of the region, the Sangam literature, and archaeological data.

The period between 600 BCE to 300 CE, Tamilakam was ruled by the three Tamil dynasties of Pandya, Chola and Chera, and a few independent chieftains, the Velir. 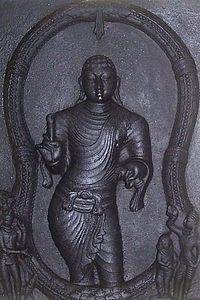 Ilango Adigal is the author of Silappatikaram, one of the five great epics of Tamil literature.[8]

There is a wealth of sources detailing the history, socio-political environment and cultural practices of ancient Tamilakam, including volumes of literature and epigraphy.[4]

Tamilakam's history is split into three periods; prehistoric, classical (see Sangam period) and medieval. A vast array of literary, epigraphical and inscribed sources from around the world provide insight into the socio-political and cultural occurrences in the Tamil region. The ancient Tamil literature consists of the grammatical work Tolkappiyam, the anthology of ten mid-length books collection Pathupattu, the eight anthologies of poetic work Ettuthogai, the eighteen minor works Patiṉeṇkīḻkaṇakku; and there are The Five Great Epics of Tamil Literature composed in classical Tamil language — Manimegalai, Cīvaka Cintāmaṇi, Silappadikaram, Valayapathi and Kundalakesi as well as five lesser Tamil epics, Ainchirukappiyangal, which are Neelakesi, , , and .

The four fold vedic system of caste hierarchy did not exist during sangam period. The society was organised by occupational groups living apart from each other.[9] The land was controlled by chieftains who indulged in constant war fare.[citation needed]

The religion of the ancient Tamils are animistic and shamanic in nature. Elements of nature such as mountains, trees, water bodies are worshipped along with spirits and minor deities. Some of this minor deities are later adapted into larger pantheons of Brahminism, Buddhism and Jainsm. The Tamil landscape was classified into five categories, thinais, based on the mood, the season and the land. Tolkappiyam, one of the oldest grammatical works in Tamil mentions that each of these thinai had an associated deity such as Kottravai (Mother goddess i.e. Kali) and Cheyon in Kurinji (the hills), Maayon in Mullai (the forests), Venthan in Marutham (the plains i.e. Vayu), and Varunan in the Neithal (the coasts and the seas). Varunan could be replaced much more ancient Sea Godesses in late sangam age.

The ancient Tamil calendar was based on the sidereal year similar to the ancient Hindu solar calendar, except that months were from solar calculations, and originally there was no 60-year cycle as seen in Sanskrit calendar. The year was made up of twelve months and every two months constituted a season. With the popularity of Mazhai vizhavu, traditionally commencement of Tamil year was clubbed on April 14, deviating from the astronomical date of vadavazhi vizhavu.

Musicians, stage artists, and performers entertained the kings, the nobility, the rich and the general population. Groups of performers included:

Together with the poets (pulavar) and the academic scholars (saandror), these people of talent appeared to originate from all walks of life, irrespective of their native profession.

The people were divided into five different clans ("kudes") based on their profession. They were:

All the five kudes constituted a typical settlement, which was called an "uru". Later each clan spread across the land, formed individual settlements of their own and concentrated into towns, cities, and countries. Thus the Mallars settled in Tamil Nadu and Sri Lanka, while the Malavars came to live in Kerala, western Tamil Nadu, eastern Andhra Pradesh and southern Sri Lanka. The Nagars inhabited southern and eastern Tamil Nadu, and northern Sri Lanka, while the Kadambars settled in central Tamil Nadu first and later moved to western Karnataka. The Thiraiyars inhabited throughout the coastal regions. Later various subsects were formed based on more specific professions in each of the five landscapes (Kurinji, Mullai, Marutam, Neithal and Palai).