Qiang (pronunciation: [tɕʰjáŋ], English approximation: /tʃjɑːŋ/ chyahng, simplified Chinese: 枪; traditional Chinese: 槍; pinyin: qiāng) is the Chinese term for spear. Due to its relative ease of manufacture, the spear in many variations was ubiquitous on the pre-modern Chinese battlefield. It is known as one of the four major weapons, along with the gun (staff), dao (sabre), and the jian (straight sword), called in this group "The King of Weapons". 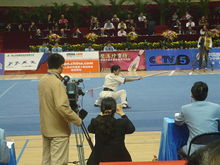 Qiang event at the 10th All China Games

Common features of the Chinese spear are the leaf-shaped blade and red horse-hair tassel lashed just below. The tassel shows elite troop status. It also serves a tactical purpose. When the spear is moving quickly, the addition of the tassel aids in blurring the vision of the opponent so that it is more difficult for them to grab the shaft of spear behind the head or tip. The tassel also served another purpose, to stop the flow of blood from the blade getting to the wooden shaft (the blood would make it slippery, or sticky when dried).

Nine kinds of spears popular in the Song dynasty

The length varied from around 9 feet long, increasing up to 21 feet. According to general Qi Jiguang, the Ming military categorized spears above 9 feet as short spears, 14 feet as long spears, and spears below 9 feet as spiked staffs, which were used more for hitting than stabbing. Spears used in war are typically made of hardwood. Martial arts (wushu) spears are typically made of wax wood, a lighter and more flexible wood better suited for performance; these are called flower spears. 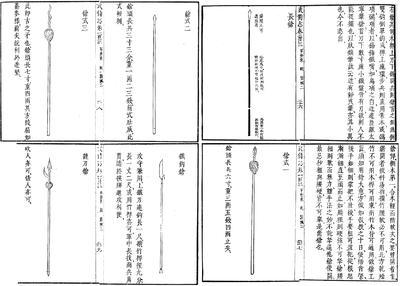 Six kinds of spears popular in the Ming dynasty

Many Chinese martial arts feature spear training in their curriculum. The conditioning provided by the spear technique is seen as invaluable and in many styles, it is the first weapons training introduced to students. Moreover, some schools of empty-handed fighting in China credit the spear technique as their foundation, notably Xingyiquan and Bajiquan.