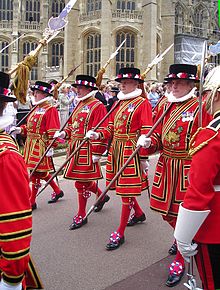 Yeomen of the Guard with partisans

An officer's partisan from 1655

A partisan (also partizan) is a type of polearm that was used in Europe in the 16th, 17th, and 18th century.[1][2][3] It consisted of a spearhead mounted on a long shaft, usually wooden, with protrusions on the sides which aided in parrying sword thrusts. Like the halberd, it quickly became obsolete with the arrival of practical firearms, although it stayed in use for many years as a ceremonial weapon. In profile, the head of a partisan may look similar to that of a ranseur, spontoon, ox tongue, or spetum; however, unlike a ranseur, the lower parts of the head have a sharpened edge.