A nelson hold is a grappling hold which is executed by one person from behind the opponent, generally when both are on the mat face down with the opponent under the aggressor. One or both arms are used to encircle the opponent's arm under the armpit, and secured at the opponent's neck. Several different nelson holds exist, and they can be separated according to the positioning of the encircling arm(s). A nelson is used to control an opponent or to turn them over onto their back and execute a pin.

The term "nelson" is derived from "full nelson", which dates back to the early 19th century. It has been suggested that it was named after Horatio Nelson, who used strategies based on surrounding the opponent to win the Battle of the Nile and the Battle of Trafalgar, it was also suggested that Bobby Nelson was the innovator of the Nelson hold.[1]

A half nelson executed from the supine position 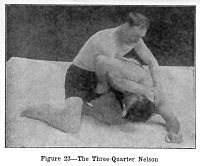 A power half nelson is a type of half nelson. The hand not performing the nelson is placed on the opponent's head to increase the overall power of the half nelson.

Countering the half nelson

When the aggressor is in the process of putting the half nelson in, the opponent can attempt to prevent it from going in deeply by using their affected arm to clamp down on the intruding arm. This is especially effective if the opponent is on their knees instead of lying flat, which is why the half nelson should not be attempted until the opponent's stomach is on the ground.

When the aggressor is driving forward perpendicularly to the opponent's body, the opponent can try to avoid being flipped over onto their back by extending their opposite foot in the direction of the undesired movement, and planting it.

Once the opponent is on their back, they can attempt to avoid having their shoulders pinned to the mat, and to get off their back, by planting teir feet and pushing the mat with them, allowing them to roll their head back so the top of their head is on the mat, rather than the back of theirneck being on the aggressor's arm. From this position they can try to turn over, either toward or away from the aggressor.

The three-quarter nelson is done by performing a half nelson using one hand and passing the other hand underneath the opponent from the same side. The passing hand goes under the opponent's neck and around the far side to the top of the neck, where it is locked with the other hand around the neck at the wrist or using a palm-to-palm or interlacing fingers grip. The three-quarter nelson can be used in amateur wrestling to pin the opponent and is more secure than a half-nelson.

The full nelson (sometimes called a double nelson or a double shoulder lock) is done by performing half nelsons with both arms. In collegiate, high school, middle school or junior high school, and most other forms of amateur wrestling, the move is illegal due to possibility of injury. The holder is on the back side of the opponent, and has their hands extended upwards under the opponents armpits, holding the neck with a palm-to-palm grip or with interlaced fingers. By cranking the hands forward, pressure can be applied to the neck of the opponent. The usage of the full nelson in combat sports is very limited. It is a secure hold which can be used to control the opponent, but does not allow for finishing action, such as pinning the opponent, executing a reliable submission hold, or allowing for effective striking.[2] Because it can be used as a limited neck crank, it is considered dangerous in some grappling arts, and is banned, for instance, in amateur wrestling. It was popularized by former WWE wrestler Chris Masters as the 'Master lock' is currently used by Bobby Lashley as the 'Hurt lock' in WWE.