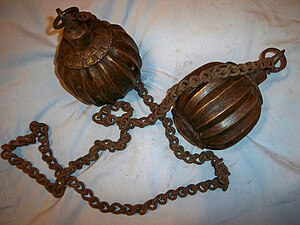 The meteor hammer (Chinese: 流星錘; pinyin: liúxīng chuí), often referred to simply as meteor (Chinese: 流星; pinyin: liúxīng), is an ancient Chinese weapon, consisting at its most basic level of two weights connected by a rope or chain. One of the flexible or "soft" weapons, it is referred to by many different names worldwide, dependent upon region, construction and intended use. Other names in use include dai chui, flying hammer, or dragon's fist. It belongs to the broader classes of flail and chain weapons.

The meteor hammer could be easily concealed as a defensive or surprise weapon, being of a flexible construction. The primary advantage for using a meteor hammer was its speed.

Using a meteor hammer involves swinging it around the body to build up considerable speed before releasing the meteor to strike at any angle. When used by a skilled fighter, its speed, accuracy and unpredictability make it a difficult weapon to defend against. While being swung, a meteor may be wrapped around its user's arms, legs, torso, neck or waist, before being unwrapped by a powerful jerk of the body to deliver a swift blow.

There are two types of meteor hammers:[1] a double-headed and a single-headed version.

The double-headed meteor hammer is typically 2–3 meters in length with a spherical head on each end. While the ends of the meteor hammer can be heavier than a rope dart head, the difference in weight is not normally great. Some meteor hammer versions have heads which are much lighter than most rope dart heads. The lighter versions of this weapon are typically used for practice and for modern wu shu displays since they are faster and less dangerous. Since the meteor has two heads, one could be used offensively while the other could be used to defend, parrying attacks or ensnaring an opponent's weapon to disarm them.

The single-headed version of this weapon is used in a similar manner to the rope dart in that it is a long reach weapon with a single head. The main difference between the headed meteor hammer and a rope spear is that traditionally the meteor hammer has an end shaped similar to an egg or melon. The single end can traditionally weigh up to 3 kg[2] and is attached to a rope that can be 6 meters (20 ft) in length (in contrast a rope dart is typically 3.6 meters long). Because of these traits, a single headed meteor hammer can be a very effective weapon, despite being very difficult to control.