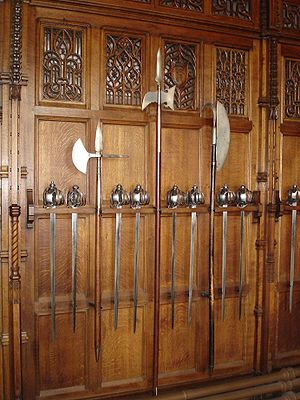 Polearms and basket-hilted swords in the Great Hall of Edinburgh Castle. The polearm on the right is a Lochaber axe; the other two are halberds.

The Lochaber axe (Gaëlic: tuagh-chatha) is a type of poleaxe that was used almost exclusively in Scotland. It was usually mounted on a staff about five feet long.[1]

Specifics of the weapon

The Lochaber axe is first recorded in 1501, as an "old Scottish batale ax of Lochaber fasoun".[2]

The weapon is very similar to the Jedburgh axe, although the crescent blade of the former is larger and heavier than that of the latter.[2] The Lochaber axe took many incarnations, all of them having a few elements in common. It was a heavy weapon, used by infantry for a defense against cavalry and as a pike against infantry.

Like most other polearms of the time, it consisted of two parts: shaft and blade. The shaft was usually some five or six feet (1.5 or 1.8 m) long. The blade was about 18 inches (46 cm) in length which usually resembled a bardiche or voulge in form. The blade might be attached in two places and often had a sharp point coming off the top. In addition a hook (or cleek) was attached to the back of the blade. A butt spike was included as a counterweight to the heavy axe head. Langets were incorporated down each side of the shaft to prevent the head from being cut off.[citation needed]

The Lochaber axe had the virtue of being a cheap weapon that could be easily made by a blacksmith. They could be used to arm men who lacked a broadsword or a firearm. Hundreds were hastily made to equip the Earl of Mar's levie troops during the Jacobite rising of 1715.[3] A few were carried by Jacobite troops during the early part of the Jacobite rising of 1745.[4] Although by the end of the rising, almost all Jacobites were armed with muskets and bayonets.[3]

In hand-to-hand combat, the axe, in common with other polearms such as the halberd, has a spike on the end, to be used on close combat in a thrusting motion. The axe on the side, coupled with the long pole, delivered a powerful blow to infantry or dismounted cavalry.[citation needed]. The example in the Edinburgh Great Hall Museum shows a substantial rear-facing hook, for catching/pulling.

For lochaber axes used by the city guards of Edinburgh, the hook is almost level with the top of the staff, making them useless as a means to catch a moving object. These hooks, however, may have been used to hang the weapons in the guard room.[2]