A leglock is a joint lock that is directed at joints of the leg such as the ankle, knee or hip joint.[1] A leglock, which is directed at joints in the foot, is sometimes referred to as a foot lock and a lock at the hip as a hip lock. Leglocks are featured, with various levels of restrictions, in combat sports and martial arts such as Sambo, Brazilian Jiu-Jitsu, catch wrestling,[2] mixed martial arts, Shootwrestling and submission wrestling, but are banned in some sports featuring joint locks such as judo.[3][4][5] The technique has been seen across a wide range of different combat sports and is reportedly over 2,500 years old, having been seen in the lost art of Pankration in the original Olympic Games.[6]

As with other jointlocks, leglocks are more effective with full body leverage. Some attack the large joints of the knee or hip and involve utilizing leverage to counteract the larger muscle groups, while others directly attack ligaments in the knee or the smaller joint of the ankle. Leglocks can involve control positions such as the inside leg triangle or leg knot to maintain control while applying the attack or transitioning between two attacks, though they and some other control positions are banned in Brazilian Jiu-jitsu competition. Some other leglock control positions have been adopted into modern BJJ and submission grappling competitions as "guards" such as the snake guard, one-legged X-guard, and 50/50 Guard, where they are used for both leglocks and to reverse into dominant positions from the bottom.

In training or sparring, leglocks are applied in a slow and controlled manner, and are often not hyperextended such as in the case of the comparatively dangerous heel hook.[7] Instead, submission is signalled before the lock is fully applied. In self-defense application, or when applied improperly or with excessive force, leglocks can cause muscle, tendon and ligament damage, even dislocation or bone fractures.

Some examples of the many types of leglocks are found below. 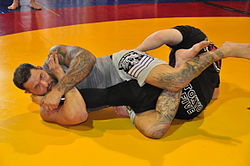 An ankle lock (occasionally referred to as a shin lock) is a leglock that is applied to any of the joints in the ankle, typically by hyperextending the talocrural joint through plantar hyperflexion.[8] Ankle locks are often applied in a manner which simultaneously causes a compression lock to the achilles tendon, and sometimes also to the calf muscle.

The straight ankle lock (depending on how it is performed is known in judo as an akiresuken-gatame or ashi-hishigi) is what is usually thought of as an ankle lock. It is typically performed using the legs to isolate one of the opponent's legs, and placing the opponent's foot in the armpit, while holding the foot with the forearm at the lower part of the opponent's calf, usually at the achilles tendon. By leveraging the hips forward, the foot becomes forcefully plantar flexed, hence creating a potent joint lock on the ankle. The forearm serves as a fulcrum in the leveraging, and may cause severe pressure on the achilles tendon, especially when the bony parts of the forearm are used. Such a straight ankle lock is sometimes referred to as an "achilles lock".

A toe hold (also known as ashi-dori-garami in judo) involves using the hands to hyperextend and/or hyperrotate the ankle, typically by grabbing the foot near the toes, and twisting or pushing the foot while controlling the opponent's leg.[9] A common type of toe hold is the figure-four toe hold, where a figure-four hold is used to hold the opponent's foot. This type of toe hold is performed by holding the foot by the toes with one hand, and putting the other hand under the opponent's achilles tendon, and grabbing the wrist. By controlling the opponent's body, and using the hands to plantar flex the foot either straight or slightly sideways, hence putting considerable torque on the ankle. The toe hold can also be applied in a similar position as an ankle lock. 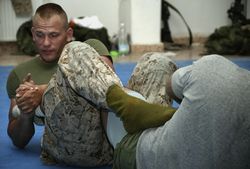 The regular heel hook twists the ankle medially. The opponent's leg is entangled to prevent him from escaping the hold.

A heel hook is a leg lock affecting multiple joints, and is applied by transversely twisting the foot either medially or laterally.[10] The torsional force puts severe torque on the ankle, which in turn transfers torque to the knee.

The heel hook is generally considered to be a very dangerous leg lock, with a high rate of injury[citation needed], especially to ligaments in the knee. It is banned, except in advanced competition, in many combat sports featuring other leg locks such as Brazilian jiu-jitsu[11] and Sambo.[12] Where it is allowed, holding it for too long is considered a serious infraction. For example, the Ultimate Fighting Championship released welterweight Rousimar Palhares after he failed to release a heel hook on Mike Pierce even after Pierce tapped out.[13][14]

A calf crush or calf slicer (also known as calf cutter, knee slicer, or knee separator), known in judo as hiza-hishigi, is a technique wherein one compresses their opponent's leg (heel to butt) while placing one's forearm or shin behind the knee to crush the calf muscle while potentially separating the knee joint. As with biceps slicers, there is a common misconception that this technique causes only pain. Calf locks can cause very serious injuries to the knee as well as damaging the calf muscle, and caution should be a priority when finishing the lock.