Krav Maga[a] is a military self-defence and fighting system developed for the Israel Defense Forces (IDF) and Israeli security forces[1][2] derived from a combination of techniques sourced from Boxing, Wrestling, Judo, Aikido, and Karate.[3][4] Krav Maga is known for its focus on real-world situations and its extreme efficiency.[5] It was derived from the street-fighting experience of Hungarian-Israeli martial artist Imi Lichtenfeld, who made use of his training as a boxer and wrestler, while defending the Jewish quarter against fascist groups in Bratislava, Czechoslovakia, during the mid-to-late 1930s.[6] In the late 1940s, after his aliyah to Mandatory Palestine, he began to provide lessons on combat training to what was to become the IDF.[7]

From the outset, the original concept of Krav Maga was to take the most effective and practical techniques of other fighting styles (originally European boxing, wrestling, and street fighting) and to make them rapidly teachable to military conscripts.[8] Krav Maga has a philosophy emphasizing aggression,[9] and simultaneous defensive and offensive maneuvers.[10] Krav Maga has been used by the Israel Defense Forces' special forces units, security forces and by regular infantry units.[11] Closely related variations have been developed and adopted by Israeli law enforcement and intelligence organizations. There are several organizations teaching variations of Krav Maga internationally.[12] In addition, there are two types of this martial art; one type is used in the Israeli security forces and one type is in civilian use.[13]

The name in Hebrew can be translated as "contact combat". The three letter root of the first word is k-r-v (קרב‎). The verb means "to come near/approach";[14] the noun derived from the same root can be translated as "combat" or "battle".[15] Maga is a participle form derived from the verb root "n-g-'a" (נגע‎) which means "to contact, touch or strike".[16] 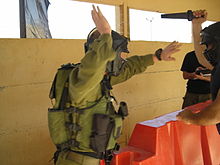 Like most martial arts, Krav Maga encourages students to avoid physical confrontation.[17] If this is impossible or unsafe, it promotes finishing a fight as quickly and aggressively as possible. Attacks are aimed at the most vulnerable parts of the body, and training is not limited to techniques that avoid severe injury; some even permanently injure or cause death to the opponent.

Students learn to defend against all variety of attacks and are taught to counter in the quickest and most efficient way.

Ideas in Krav Maga include:[18]

Training can also cover the study and development of situational awareness to develop an understanding of one's surroundings, learning to understand the psychology of a street confrontation, and identifying potential threats before an attack occurs. It may also cover physical and verbal methods to avoid violence whenever possible. It also teaches mental toughness, using controlled scenarios to strengthen mental fortitude in order for students to control the impulse and not do something rash, but instead attack only when necessary and as a last resort. 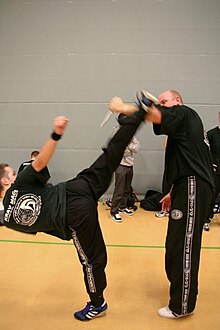 Some of the key focuses of techniques[25] in Krav Maga are—as described above—effectiveness and instinctive response under stress. To that end, Krav Maga is an eclectic system that has not sought to replace existing effective techniques, taking what is useful from available systems, for example:

Imre Lichtenfeld (also known as Imi S'de-Or) was born in 1910 in Budapest, Austro-Hungary to a Jewish family and grew up in Bratislava (Slovakia). Lichtenfeld became active in a wide range of sports, including gymnastics, wrestling, and boxing. In 1928, Lichtenfeld won the Slovak Youth Wrestling Championship, and in 1929 the adult championship (light and middle weight divisions).[26] That same year, he also won the national boxing championship and an international gymnastics championship. During the ensuing decade, Lichtenfeld's athletic activities focused mainly on wrestling, both as a contestant and a trainer.

In the mid-1930s, anti-Semitic riots began to threaten the Jews of Bratislava, Czechoslovakia. Lichtenfeld became the leader of a group of Jewish boxers and wrestlers who took to the streets to defend Jewish neighborhoods against the growing numbers of anti-Semitic national socialists. Lichtenfeld quickly discovered, however, that actual fighting was very different from competition fighting, and although boxing and wrestling were good sports, they were not always practical for the aggressive and brutal nature of street combat. It was then that he started to re-evaluate his ideas about fighting and started developing the skills and techniques that would eventually become Krav Maga. Having become a thorn in the side of the equally anti-Semitic local authorities, in 1940 Lichtenfeld left his home with his family and friends on the last refugee ship to escape Europe. 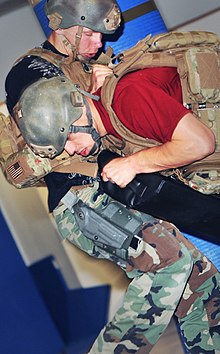 After making his way to Mandatory Palestine, Lichtenfeld joined the Haganah paramilitary organization.[27] In 1944 Lichtenfeld began training fighters in his areas of expertise: physical fitness, swimming, wrestling, use of the knife, and defense against knife attacks. During this period, Lichtenfeld trained several elite units of the Haganah including Palmach (striking force of the Haganah and forerunner of the special units of the Israel Defense Forces) and the Pal-Yam, as well as groups of police officers.

In 1948, when the State of Israel was founded and the IDF was formed, Lichtenfeld became Chief Instructor for Physical Fitness and Krav Maga at the IDF School of Combat Fitness. He served in the IDF for about 20 years, during which time he developed and refined his unique method for self-defense and hand-to-hand combat. [28] Self-defense was not a new concept, since nearly all martial arts had developed some form of defensive techniques in their quest for tournament or sport dominance. However, self-defense was based strictly upon the scientific and dynamic principles of the human body. In 1965 judo training was added as part of the Krav Maga training. Until 1968 there were no grades in Krav Maga. Then a trainee's grades were determined largely by his knowledge in judo.[29][30]

In 1968 , Lichtenfeld's principal student and first black belt,[31] began learning aikido. In 1971 Eli left for France, where he received a black belt in aikido.[32] Upon his return, Avikzar started working as an instructor alongside Imi to integrate more traditional martial arts into krav maga.[33] Then in 1974 Imre retired and gave Eli Avikzar control over the Krav Maga training center in Netanya.[34] Shortly after, in 1976, Avikzar joined the permanent force of IDF, as head of the Krav Maga section. The role of Krav Maga in the army advanced greatly after Eli's appointment. More courses were given and every P.E. instructor was obliged to learn Krav Maga. Avikzar continued to develop Krav Maga within the IDF until his retirement in 1987. Up to this date, Eli had trained 80,000 male soldiers and 12,000 female soldiers.[31]

Further pursuing excellence as a student of martial arts, Eli went to Germany in 1977 and received a black belt in aikido from the European Federation.[35] In 1978 the Krav Maga association was established, and in 1989, as an active member of the judo association, Eli Avikzar helped to establish the professional and rank committees by founding the Israeli Krav Maga Association (IKMA or KAMI).[35][36] Eli retired as the Chief Krav Maga instructor in 1987 and Boaz Aviram became the third person to hold the position, being the last head instructor to have studied directly with both Lichtenfeld and Avikzar.[30][37]

Krav Maga in the Israeli government 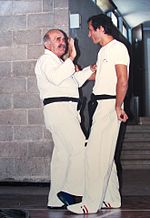 The IDF offers a five-week Krav Maga instructor course.[38] It has held an annual Krav Maga competition since May 2013.[39]

Upon Imi Lichtenfeld's retirement from the IDF, he decided to open a school and teach Krav Maga to civilians.[40] The first Krav Maga course took place at the Wingate Institute, Netanya, Israel, in 1971, under his direct supervision.[41][42]

Most of the Krav Maga organizations in Israel use Imi Lichtenfeld's colored belt grading system which is based upon the Judo ranking system. It starts with white belt, and then yellow, orange, green, blue, brown and black belts. Black belt students can move up the ranks from 1st to 9th Dan. The time and requirements for advancing have some differences between the organizations.

Other organizations that teach Krav Maga in and outside of Israel use similar grading systems.[44]

A patch system was developed by Eyal Yanilov in the late 1980s. The grades are divided into three main categories; Practitioner, Graduate and Expert. Each of the categories, which are often abbreviated to their initials, has five ranks. Grades P1 through to P5 are the student levels and make up the majority of the Krav Maga community.[45] After P5 are G1-G5, and in order to achieve Graduate level the student has to demonstrate a proficiency in all of the P level techniques before advancing.[46]

Although there are some subtle differences, the various organizations teach the same core techniques and principles.[47] Some other organizations have less formal grading ranks without belts or patches but do have levels by which students can monitor their progress.[48]

In some organizations sparring is slow and light until the student reaches G2 level. This takes approximately four to six years because rising one level in the Practitioner and Graduate categories takes at minimum half a year of consistent training. It is, however, more common to observe regular trainees grading only once a year from P3 and up.[49]

Once in G2, students also do simulated "real" fighting with protective gear.[50]

Some organizations encourage sparring as soon as students start training. They train full contact with minimal gear in both stand-up and ground fighting, using semi-professional MMA rules for safety. Sparring should always be supervised and monitored carefully by a qualified instructor.[citation needed]

Some Krav Maga organizations do not support a competition component, taking the stance that Krav Maga is not a sport. So-called "fighting" sports tend to operate under principles of using safe techniques, doing minimal harm, and consequently wearing down opponents and using other tactics supported by the "rules" of safe competition. In its role as self-defense and as a hand-to-hand combat system, Krav Maga operates under a completely different set of principles in which techniques may indeed cause significant damage and fights are to be ended as quickly as possible when the conflict cannot be avoided. Krav Maga organizations that involve competition are usually founded and named specifically to focus on using Krav Maga-based techniques specifically under a set of sporting principles.[citation needed]