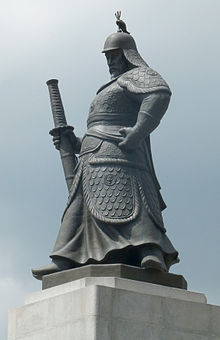 Korean swords have served a central place in the defense of the nation for thousands of years. Although typical Korean land battles have taken place in wide valleys and narrow mountain passes, which favor use of the spear and bow,[1] the sword found use as a secondary, close-quarters weapon, especially useful during sieges and ship-to-ship boarding actions. Higher quality, ceremonial swords were typically reserved for the officer corps as a symbol of authority with which to command the troops. Ceremonial swords are still granted to military officials by the civilian authority to this day.[2]

Korean swords typically fall into two broad categories, the Geom, and the Do.[3] The Geom is a double-edged weapon, while the Do is a single-edged weapon; although exceptions exist. In common parlance, all swords may be referred to as Geom (Korean:검; 劍).

The rarity of traditional Korean swords makes them extremely valuable, and in high demand for museums and collectors. 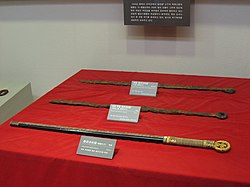 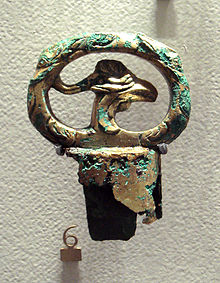 Ornamented Sword made during the Silla period

Evidence of sword production dates to the transitional Late Bronze to Early Iron Age (c. 1st century BC), with an earthenware mold for a Bronze Sword found in South Gyeongsang Province.[5]

The earliest Korean sword type is the so-called Hwandudaedo or "ring-pommel sword," prevalent during the 1st to 6th centuries. Until the 3rd century, these swords were very rare and presumably reserved for royalty. They became more attainable in the later 4th and during the 5th century, and are found in many higher class tombs of this period. Their production declined in the 6th century.

By the last third of the Three Kingdoms period (i.e. 450 AD and beyond), steel making techniques had come from China (possibly during the Southern and Northern Dynasties period in China) and were also employed in Korean swordmaking by all three Korean kingdoms (Goguryeo, Baekje, and Silla).[citation needed] In 2013, a Chinese Character inscription was discovered on a 5th-century sword from the Geumgwanchong tomb in Gyeongju, North Gyeongsang Province. The scabbard of the sword has the inscription 尒斯智王 Yisaji-wang ("King Isaji").[6]

Long swords during the Korean Three Kingdoms period were used primarily by cavalry and commanders (who were also usually mounted), not infantry. At this time land warfare consisted mostly of spearmen and bowmen on foot, mounted archers on horseback using two-handed bows, and mounted swordsmen with twin blades. Swords were not a primary weapon for all combat but were instead used mostly for shock attacks, defensive strokes, and for close-in fighting. Blades were heavy as they were made mostly of bronze and later iron, and pommels were often knobbed and used as balances or for very close-in work. Short swords may have been used in follow-up attacks, as short sword carriers were heavily armored.

During the Goryeo dynasty, a limited number of Korean swords were exported for trade missions in Asia. It is likely that Korean swordmaking was influenced by Mongol and Chinese weapon manufacture after Goryeo's submission as a Mongol vassal after 6 Mongol invasions ending in 1259. 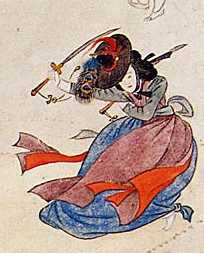 Painting of a kisaeng performing a sword dance (Hyewon, 1805)

The Joseon period (15th to 19th centuries) is the "classical" era of Korean culture, including the creation of a national script and the suppression of Korean Buddhism in favour of Neo-Confucianism. Accompanying the neo-Confucian philosophies was an increased emphasis on the artistic, literary, and academic pursuits, while martial pursuits and training (still understood to be necessary) declined in cultural stature.

Korean swords were in production mostly for military and ceremonial use; private ownership outside of these purposes was largely restricted to members of the wealthy and/or politically influential classes, and possession by commoners often drew the suspicion of the authorities. Several types of ceremonial swords were made; among these sword types are the jingeom (dragon sword) and ingeom (tiger sword), which by tradition could be forged only at certain times. The highest grade of these, sa-ingeom (four tigers sword) and possibly the sa-jingeom (four dragons sword - none are extant) were reserved for the monarch and could only be made during a window of 2 hours every 12 years. The lower-grade swords - i-jingeom, sam-jingeom, i-ingeom, sam-ingeom (two dragons, three dragons, two tigers, three tigers) - could be made more frequently.

As only high-quality steel was considered for use in forging military swords, the quantity produced by Korean blacksmiths, even for Korea's own military, was limited (most Korean infantry used spears, tridents, and ranged weaponry such as the crossbow and composite bow, while swords were usually wielded by officers, local magistrates/deputies, and mounted soldiers). In addition, because Korean weapons manufacture was typically dedicated to the production of weapons for military/government use and under close scrutiny by government authorities, it was not uncommon for Koreans (both military personnel and civilians) to import swords, usually from Japan's renowned swordsmiths, in the event that Korean sources could not be secured.

Among the swords that were produced in Korea for use by its military and law enforcement officials include the jedok geom and bonguk geom (these refer to both a style of sword as well as a style of bladed combat). Blades were single-edged and usually between 3–4 feet long; however, certain swords of the jedok geom style could reach a length of 6 feet (while it is unclear as to the style of the swords of Admiral Yi Sun-shin, he is believed to have wielded swords that were almost that size).

During the Imjin War (1592-1598), under the influence of Japanese swords, Hwandos with blades with a length of 90 cm or more appeared.

The saingeom is a type of Joseon-era sword from Western Korea. It has a 90 centimeter (35-inch) blade, produced primarily by molding rather than hammering.[citation needed]

Elements of the Korean sword include: geomjip or scabbard, most often of lacquer; hyuljo or fuller (most genuine Korean swords didn't have a fuller); hwando magi or collar; ho in or collar; kodeungi or hand guard; a ring-design pommel; tassels; a round and wide designed sword guard, or a straight lotus design.[7]

Many different types of Do and Geom exist,[8] ranging from very simple forms found in many nations, to very unique and artistic designs found solely in Korea.

During the Joseon period, swords also had ranks depending on who wielded them and what their purpose was. The highest ranking of these swords was known as the Byeol-ungeom (별운검: 別雲劍), literally meaning "cloud-splitting sword." Only two such swords existed and were wielded by the King's two bodyguards, who always stood on either side of him and held the nobility title of Un'geom (운검: 雲劍). [1]

Only by the mid-1990s did Korean swordmaking come back to expert levels comparable to the Joseon era.[citation needed] Haedong jingeom (해동진검; 海東陣劍) This literally means 'East Asian Practical Sword' is the neologistic term for current-day swords for "revivals" of Korean swordsmanship.

Sword ownership in Korea is currently restricted (private weapons ownership was culturally frowned upon and largely restricted during other times in Korean history, particularly during the Joseon era and the Japanese occupation period - albeit for different reasons in either period), and there are very few traditional sword collectors in Korea today.[citation needed] General/flag-grade officers are given dress swords upon assuming command in the Republic of Korea (ROK) army. Despite restrictions on sword ownership and a lingering social preference against armed martial arts (dating at least to the Joseon era), practical sword fighting is enjoying a small revival amongst elite military regiments, and fencing is once again attracting interest in Korean universities.

Korean historical action films have elements of swordsmanship within them. Important recent films readily available (and subtitle in Chinese/English) include:

Chung Doo-Hong martial arts director. Set in the Goryeo dynasty, during 1375 chronicles General Choi Jung's mission to the Ming to make peace during their wars against the Yuan.

A Korean production that is a variant of Taegukgi: The Brotherhood of War. This is set in the Three Kingdoms of Korea period where there were various uprisings in the military and many assassination attempts on the King.

In November 2015, the Statue of Admiral Yi Sun-Shin erected in Parliament was replaced with a newly created authentic statue. The sword of the statue was longer than the traditional Korean sword and more resembled the Japanese sword. [18][19]