Tool or weapon with a cutting edge or blade
For other uses, see Knife (disambiguation). 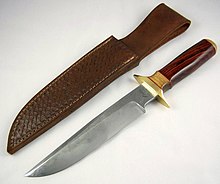 A Bowie knife of pattern-welded steel

A table knife resting on a stand

A knife (plural knives; from Old Norse knifr, "knife, dirk"[1]) is a tool or weapon with a cutting edge or blade, often attached to a handle or hilt. One of the earliest tools used by humanity, knives appeared at least 2.5 million years ago, as evidenced by the Oldowan tools.[2][3] Originally made of wood, bone, and stone (such as flint and obsidian), over the centuries, in step with improvements in both metallurgy and manufacturing, knife blades have been made from copper, bronze, iron, steel, ceramic, and titanium. Most modern knives have either fixed or folding blades; blade patterns and styles vary by maker and country of origin.

Knives can serve various purposes. Hunters use a hunting knife, soldiers use the combat knife, scouts, campers, and hikers carry a pocket knife; there are kitchen knives for preparing foods (the chef's knife, the paring knife, bread knife, cleaver), table knives (butter knives and steak knives), weapons (daggers or switchblades), knives for throwing or juggling, and knives for religious ceremony or display (the kirpan).[4]

Characteristic parts of a knife

A modern knife consists of:

The blade edge can be plain or serrated, or a combination of both. Single-edged knives may have a reverse edge or false edge occupying a section of the spine. These edges are usually serrated and are used to further enhance function.

The handle, used to grip and manipulate the blade safely, may include a tang, a portion of the blade that extends into the handle. Knives are made with partial tangs (extending part way into the handle, known as "stick tangs") or full tangs (extending the full length of the handle, often visible on top and bottom). The handle may include a bolster, a piece of heavy material (usually metal) situated at the front or rear of the handle. The bolster, as its name suggests, is used to mechanically strengthen the knife.

A Gerber-made full-tang survival knife. The metal from the blade extends into the handle. 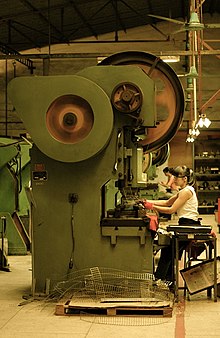 Knife blades can be manufactured from a variety of materials, each of which has advantages and disadvantages. Carbon steel, an alloy of iron and carbon, can be very sharp. It holds its edge well, and remains easy to sharpen, but is vulnerable to rust and stains. Stainless steel is an alloy of iron, chromium, possibly nickel, and molybdenum, with only a small amount of carbon. It is not able to take quite as sharp an edge as carbon steel, but is highly resistant to corrosion. High carbon stainless steel is stainless steel with a higher amount of carbon, intended to incorporate the better attributes of carbon steel and stainless steel. High carbon stainless steel blades do not discolor or stain, and maintain a sharp edge. Laminated blades use multiple metals to create a layered sandwich, combining the attributes of both. For example, a harder, more brittle steel may be sandwiched between an outer layer of softer, tougher, stainless steel to reduce vulnerability to corrosion. In this case, however, the part most affected by corrosion, the edge, is still vulnerable. Damascus steel is a form of pattern welding with similarities to laminate construction. Layers of different steel types are welded together, but then the stock is manipulated to create patterns in the steel.[5]

Titanium is a metal that has a better strength-to-weight ratio, is more wear resistant, and more flexible than steel. Although less hard and unable to take as sharp an edge, carbides in the titanium alloy allow them to be heat-treated to a sufficient hardness. Ceramic blades are hard, brittle, and lightweight: they may maintain a sharp edge for years with no maintenance at all, but are as fragile as glass and will break if dropped on a hard surface. They are immune to common corrosion, and can only be sharpened on silicon carbide sandpaper and some grinding wheels. Plastic blades are not especially sharp and typically serrated. They are often disposable.

Steel blades are commonly shaped by forging or stock removal. Forged blades are made by heating a single piece of steel, then shaping the metal while hot using a hammer or press. Stock removal blades are shaped by grinding and removing metal. With both methods, after shaping, the steel must be heat treated. This involves heating the steel above its critical point, then quenching the blade to harden it. After hardening, the blade is tempered to remove stresses and make the blade tougher. Mass manufactured kitchen cutlery uses both the forging and stock removal processes.[6] Forging tends to be reserved for manufacturers' more expensive product lines, and can often be distinguished from stock removal product lines by the presence of an integral bolster, though integral bolsters can be crafted through either shaping method.

Knives are sharpened in various ways. Flat ground blades have a profile that tapers from the thick spine to the sharp edge in a straight or convex line. Seen in cross section, the blade would form a long, thin triangle, or where the taper does not extend to the back of the blade, a long thin rectangle with one peaked side. Hollow ground blades have concave, beveled edges. The resulting blade has a thinner edge, so it may have better cutting ability for shallow cuts, but it is lighter and less durable than flat ground blades and will tend to bind in deep cuts.[citation needed] Serrated blade knives have a wavy, scalloped or saw-like blade. Serrated blades are more well suited for tasks that require aggressive 'sawing' motions, whereas plain edge blades are better suited for tasks that require push-through cuts (e.g., shaving, chopping, slicing).

Many knives have holes in the blade for various uses. Holes are commonly drilled in blades to reduce friction while cutting, increase single-handed usability of pocket knives, and, for butchers' knives, allow hanging out of the way when not in use. 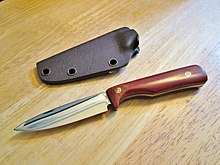 A fixed blade knife, sometimes called a sheath knife, does not fold or slide, and is typically stronger due to the tang, the extension of the blade into the handle, and lack of moving parts.

Another prominent feature of many folding knives is the opening mechanism. Traditional pocket knives and Swiss Army knives commonly employ the nail nick, while modern folding knives more often use a stud, hole, disk, or flipper located on the blade, all of which have the benefit of allowing the user to open the knife with one hand.

The "wave" feature is another prominent design, which uses a part of the blade that protrudes outward to catch on one's pocket as it is drawn, thus opening the blade; this was patented by Ernest Emerson and is not only used on many of the Emerson knives, but also on knives produced by several other manufacturers, notably Spyderco and Cold Steel.[16]

Automatic or switchblade knives open using the stored energy from a spring that is released when the user presses a button or lever or other actuator built into the handle of the knife. Automatic knives are severely restricted by law in the UK and most American states.[17] 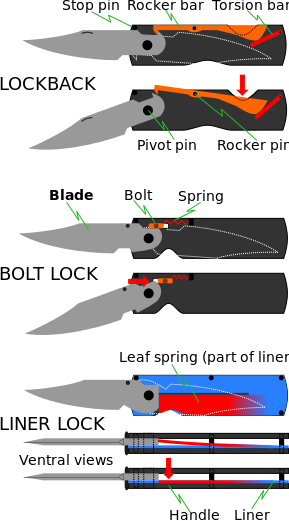 When negative pressure (pushing down on the spine) is applied to the blade all the stress is transferred from the hook on the blade's tang to the hook on the rocker bar and thence to the small rocker pin. Excessive stress can shear one or both of these hooks rendering the knife effectively useless. Knife company Cold Steel uses a variant of the lock back called the Tri-Ad Lock which introduces a pin in front of the rocker bar to relieve stress on the rocker pin, has an elongated hole around the rocker pin to allow the mechanism to wear over time without losing strength and angles the hooks so that the faces no longer meet vertically.

The bolt in the bolt lock is a rectangle of metal that is constrained to slide only back and forward. When the knife is open a spring biases the bolt to the forward position where it rests above the tang of the blade preventing the blade from closing. Small knobs extend through the handle of the knife on both sides allowing the user to slide the bolt backward freeing the knife to close. The Axis Lock used by knife maker Benchmade is functionally identical to the bolt lock except that it uses a cylinder rather than a rectangle to trap the blade.[12] The Arc Lock by knife maker SOG is similar to the Axis Lock except the cylinder follows a curved path rather than a straight path.[13]

An OTF knife, showing the sliding blade being extended from the handle

A sliding knife is a knife that can be opened by sliding the knife blade out the front of the handle. One method of opening is where the blade exits out the front of the handle point-first and then is locked into place (an example of this is the gravity knife). Another form is an OTF (out-the-front) switchblade, which only requires the push of a button or spring to cause the blade to slide out of the handle and lock into place. To retract the blade back into the handle, a release lever or button, usually the same control as to open, is pressed. A very common form of sliding knife is the sliding utility knife (commonly known as a stanley knife or boxcutter).

The handles of knives can be made from a number of different materials, each of which has advantages and disadvantages. Handles are produced in a wide variety of shapes and styles. Handles are often textured to enhance grip.

A traditional knife handle made from buffalo horn (Tasikmalaya, Indonesia) 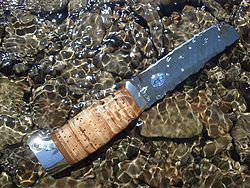 Further information on the various types of knives: Blade § Patterns of knife blades

As a weapon, the knife is universally adopted as an essential tool. It is the essential element of a knife fight. For example:

A primary aspect of the knife as a tool includes dining, used either in food preparation or as cutlery. Examples of this include: 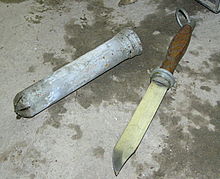 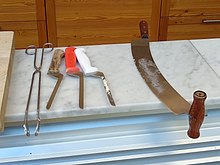 As a utility tool the knife can take many forms, including: 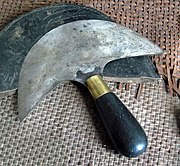 A Head knife (Round knife). 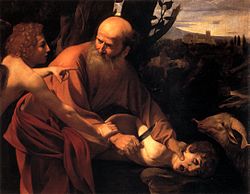 The Sacrifice of Isaac by Caravaggio, (1590–1610; Oil on canvas; Uffizi). Abraham is holding the sacrificial knife.

The knife plays a significant role in some cultures through ritual and superstition, as the knife was an essential tool for survival since early man.[3] Knife symbols can be found in various cultures to symbolize all stages of life; for example, a knife placed under the bed while giving birth is said to ease the pain, or, stuck into the headboard of a cradle, to protect the baby;[20][21] knives were included in some Anglo-Saxon burial rites, so the dead would not be defenseless in the next world.[22][23] The knife plays an important role in some initiation rites, and many cultures perform rituals with a variety of knives, including the ceremonial sacrifices of animals.[24] Samurai warriors, as part of bushido, could perform ritual suicide, or seppuku, with a tantō, a common Japanese knife.[25] An athame, a ceremonial knife, is used in Wicca and derived forms of neopagan witchcraft.[26][27]

In Greece, a black-handled knife placed under the pillow is used to keep away nightmares.[28] As early as 1646 reference is made to a superstition of laying a knife across another piece of cutlery being a sign of witchcraft.[29] A common belief is that if a knife is given as a gift, the relationship of the giver and recipient will be severed. Something such as a small coin, dove or a valuable item is exchanged for the gift, rendering "payment."[30]

Knives are typically restricted by law, because they are often used in crime, although restrictions vary greatly by country or state and type of knife. For example, some laws prohibit carrying knives in public while other laws prohibit private ownership of certain knives, such as switchblades.