The karambit or kerambit (as used in Indonesian), kurambik or karambiak (both from the Minangkabau language) is a small Indonesian curved knife resembling a claw from Minangkabau people of West Sumatra.[1] 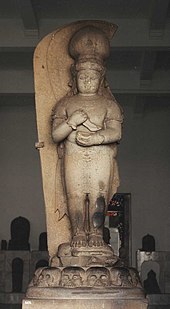 King Adityawarman statue holding a karambit, he was a king of Pagaruyung Kingdom or Malayapura, a state in West Sumatra (1347–1375).

The karambit is believed to have originally been weaponized among the Minangkabau people of West Sumatra[2] where, according to folklore, it was inspired by the claws of a tiger. As with most weapons of the region, it was originally an agricultural implement designed to rake roots, gather threshing and plant rice in most of island Southeast Asia. It's a smaller variant of the Southeast Asian sickles (Filipino garab and karit; Indonesian celurit, arit, or sabit; and Malaysian sabit). As it was weaponised, the blade became more curved to maximise cutting potential. Through Indonesia's trade network and close contact with neighbouring countries, the weaponization of the karambit was eventually dispersed through what are now Thailand, Cambodia, Laos, Myanmar and the Philippines.[3][4]

Culturally, the karambit was a subject of condescension in Java because of its history as a weapon of the agrarian peasantry, as opposed to the kesatria (warrior class) who were trained in the keraton or royal palace. European accounts tell that soldiers in Indonesia were armed with a kris at their waist or back and a spear in their hands, while the karambit was used as a last resort when the fighter's other weapons were lost in battle. The renowned Bugis warriors of Sulawesi were famous for their embrace of the karambit. Today it is one of the main weapons of silat and is commonly used in Filipino martial arts as well.[5]

Superficially, the karambit resembles the jambiyah but there is no connection. The jambiyah was always designed as a weapon and serves as a status marker, often made by skilled artisans and jewelers using precious stones and metals, whereas the karambit was and still remains an unadorned, modest farmer's implement and useful utility knife.[5] 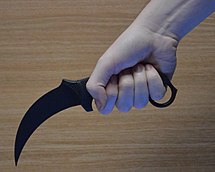 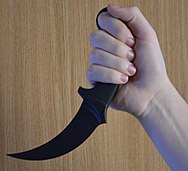 A modern karambit, held in a hammer grip (up) and the other held traditionally (down).

The karambit is held with the blade pointing downward from the bottom of the fist, usually curving forwards. While it is primarily used in a slashing or hooking motion, karambit with a finger ring are also used in a punching motion hitting the opponent with the finger ring. Some karambit are designed to be used in a hammering motion. This flexibility of striking methods is what makes it useful in self-defense situations. The finger guard makes it difficult to disarm and allows the knife to be maneuvered in the fingers without losing one's grip.[5]

The short Filipino karambit has found some favor in the West because such proponents allege the biomechanics of the weapon allow for more powerful cutting strokes and painful "ripping" wounds, and because its usability is hypothesized as more intuitive, but very difficult to master than a classic knife

There are many regional variants of karambit. The length of the blade, for example, could vary from one village or blacksmith to another. Some have no finger guard and some feature two blades, one on each side of the handle. Traditional types include:

Additionally, modern karambit may have spikes or spurs on the front or rear ricasso, which may be intended for gripping clothing or horse tack, tearing flesh or for injecting a poison, such as the upas.[6]

The modern Western interpretation of the karambit is far removed from the original agricultural tool. They may have folding blades, are finished to a high standard, made from expensive materials as opposed to being rudimentary and makeshift and are generally larger to accommodate larger hands.[7]