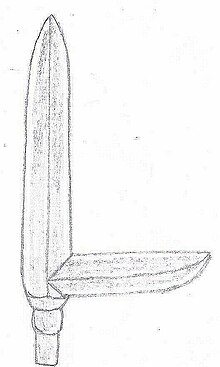 The kama-yari (鎌槍, sickle spear) is essentially a yari with horizontal kama (blade) at the base of the vertical blade to assist in hooking things. Generally, the hooks are large enough to hold the head, neck or jaw (when in a tree)[clarification needed] or to hook limbs of a swordsman on the ground; it is different in function in this respect from other types of yari. Including, the kama-yari was used to hook horsemen and dismount them.[1]

Historically, it also had a non-military use, where it was employed by Japanese firemen to pull down the roofs of burning buildings to slow a fire much the same way firemen of today would topple buildings to create a firebreak.

The kama-yari is said to have been developed by Kakuzenbo Hoin In’ei, who wanted to improve upon the halberd used by Buddhist priests at the time.