Chinese martial artist
For other uses, see Ip Man (disambiguation).
In this Chinese name, the family name is Ip/Yip.

Ip Man, also known as Yip Man,[2] (Chinese: 葉問; 1 October 1893 – 2 December 1972) was a Chinese martial artist and a grandmaster of the martial art Wing Chun. He had several students who later became martial arts masters in their own right, the most famous among them being Bruce Lee.

Ip started learning Wing Chun from Chan Wah-shun when he was 9[4] or 13.[5][6] Chan was 57 at the time, and Ip became Chan's 16th and last student.[7][8] Due to Chan's age, he was only able to train Ip for three years before suffering a mild stroke in 1909 and retiring back to his village. Ip learned most of his skills and techniques from Chan's second most senior student, Ng Chung-sok (吳仲素).[9]

At the age of 16, with help from his relative Leung Fut-ting, Ip moved to Hong Kong and there he attended school at St. Stephen's College, a secondary school for wealthy families and foreigners living in Hong Kong.[3] Six months after moving to Hong Kong, a classmate of Ip's named Lai told him that a friend of Lai's father who was an expert in Kung Fu techniques was living with them, and had offered to have a friendly sparring match with Ip. At the time, Ip was undefeated so he eagerly accepted the challenge. He went to Lai's house on a Sunday afternoon and, after exchanging brief pleasantries, challenged the man to a duel. The man was Leung Bik and he easily overwhelmed Ip Man. Incredulous at the speed with which he had been countered, Ip requested a second duel and was beaten again, just as soundly. Discouraged by his defeat, Ip left without a word and afterward was so depressed that he did not dare mention that he knew Kung Fu. A week later, Lai told him that the man he had fought was asking after him. Ip replied that he was too embarrassed to return, at which point Lai told him that Leung Bik had highly praised his Kung Fu techniques and that he was the son of Leung Jan, who trained Ip's master Chan Wah-shun. Ip proceeded to train with Leung Bik,[10] until Leung's death in 1911.[11]

Ip returned to Foshan in 1917 when he was 24 and became a police officer there for the Nationalist government.[3] He taught Wing Chun to several of his subordinates, friends and relatives, but did not officially run a martial arts school.

Ip was a notorious member of the Kuomintang, and according to rumors, he joined the Central Bureau of Investigation and Statistics in its academy in Guizhou in 1938, after which he would have returned to Foshan as an undercover intelligence officer. However, the veracity of this has been disputed.[12]

Ip went to live with Kwok Fu during the Second Sino-Japanese War and only returned to Foshan after the war, where he resumed his career as a police officer. Ip found some time to train his second son Ip Ching during the year 1949. At the end of 1949 after the Chinese Communist Party won the Chinese Civil War, as Ip was a member of the Kuomintang, Ip, his wife and their elder daughter Ip Nga-sum left Foshan for Hong Kong.[14]

Ip, his wife Cheung and their daughter arrived in Hong Kong through Macau in 1950. His wife and daughter would later return to Foshan to retrieve their identity cards. However, due to the closure of borders between China and Hong Kong in 1951, Ip and Cheung were separated for good, with the latter remaining in Foshun until her death.

Initially, Ip Man's teaching business was poor in Hong Kong because Ip's students typically stayed for only a couple of months. He moved his school twice: first to Castle Peak Road in Sham Shui Po, and then to Lee Tat Street (利達街) in Yau Ma Tei. By then, some of his students had attained proficiency in Wing Chun and were able to start their own schools. They would go on and spar with other martial artists to compare their skills, and their victories helped to increase Ip's fame.

Around 1955, he had a mistress from Shanghai, who was referred to by his students simply as Shanghai Po (上海婆). Ip and this mistress also had an illegitimate son named Ip Siu-wah (葉少華). Meanwhile, in Foshan, his wife Cheung died of cancer in 1960. Ip never formally introduced his mistress to his other sons, who eventually arrived in Hong Kong to reunite with him in 1962.[15]

In 1967, Ip and some of his students established the Ving Tsun (Wing Chun) also pronounced as "Wing Chun" Athletic Association (詠春體育會).[16][17] The main purpose of the Ving Tsun Athletic Association was to help Ip tackle his financial difficulties in Hong Kong,[18] which was due to his supposed regular use of opium.[19] One of his former students, Duncan Leung, claimed that Ip used tuition money to support his opium addiction.[20] Ip's mistress died of cancer in 1968, and their son later became a Wing Chun practitioner like his half-brothers. 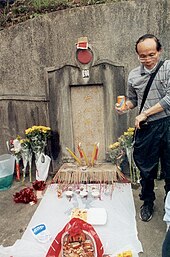 Ip died on 2 December 1972 in his unit at 149 Tung Choi Street in Hong Kong,[1] from laryngeal cancer, only seven months before the death of Bruce Lee, his most famous student.[21] He was buried at Wo Hop Shek, Hong Kong.

Ip's legacy is the global practice of Wing Chun. Ip's notable students include: Wong Shun-leung, Bruce Lee, Moy Yat, Ho Kam Ming, Victor Kan, his nephew Lo Man-kam and William Cheung.[10] Ip wrote a history of Wing Chun.[22] Many artefacts of his life are on display in the Ip Man Museum on the Foshan Ancestral Temple grounds. Ip Man is portrayed in many films based on his life.[23]

Ip Man was portrayed by Wang Luoyong in Dragon: The Bruce Lee Story [26] in a 1993 American biographical drama film based on the life of Bruce Lee, who was one of Ip's students.

Yu Chenghui portrayed Ip Man in the 2008 Chinese television series The Legend of Bruce Lee, which was also based on the life of Bruce Lee.

Ip Man, a Hong Kong film based on the life of Ip Man, starring Donnie Yen as the martial artist, was released in cinemas in 2008. The film takes a number of liberties with Ip's life, often for dramatic effect. Ip's eldest son Ip Chun appears in the film and served as a consultant on the production, which focuses on Ip's life during the 1930s to the 1940s during the Second Sino-Japanese War.

The sequel Ip Man 2 focuses on Ip's beginnings in Hong Kong and his students, including Bruce Lee. Ip Man has taught many other people. Amid a surge of Ip Man–related film projects in production, Donnie Yen told the Chinese media in March 2010 that after Ip Man 2, he would no longer play the Wing Chun master, stating, "I would never ever touch any films related to Ip Man. This will be my final film on the subject. Whenever something becomes a success, everyone would jump on the bandwagon, this is very frightening. Did you know how many Ip Man films are in production? Under such condition, we would not progress, it'd only lead to over-saturation of the subject matter."[27]

Another Hong Kong film based on Ip Man's life, called The Legend Is Born – Ip Man, was released in June 2010. Herman Yau directed the film and it starred Dennis To as Ip Man and Seventeen band's Wen Junhui as his younger counterpart. Ip Chun makes a special appearance in the film as Leung Bik.

In the 2010 film Bruce Lee, My Brother, Ip Man was portrayed by Wong Chi-wai.

Wong Kar-wai's The Grandmaster is a 2013 film starring Tony Leung as Ip Man. The film concentrates more on the end of an era in Chinese martial arts history as the Second Sino-Japanese War broke out. It was created in an almost biographical style, highlighting parts of history. In contrast with the other Ip Man–related projects, The Grandmaster is a more reflective film, focusing more on the musings and philosophies between martial arts and life, as well as Ip Man's journey through the early 1930s to the early 1950s.

The 2013 Chinese television series Ip Man, based on Ip Man's life, was first aired on the television network Shandong TV from late February to mid March 2013. It was directed by Fan Xiaotian and starred Kevin Cheng as the eponymous character and Zhou Jianan as the younger counterpart.

The 2013 Hong Kong film Ip Man: The Final Fight, directed by Herman Yau and starring Anthony Wong as Ip Man, focuses on Ip's later life in Hong Kong. Kevin Cheng from the 2013 television series Ip Man made a guest appearance as young Ip Man. Ip Chun made a cameo appearance in the film. This film also focuses on the loyalty of Ip Man's students towards their master.

Despite Yen's statement in March 2010 that he no longer wanted to be involved in future films related to Ip Man, a new film to the same series, Ip Man 3, was released on 24 December 2015 with Yen once again reprising his role as Ip Man.[28] He also reprised his role as Ip Man in Ip Man 4, which focused on Ip Man coming to San Francisco to find a school for his son as he himself struggles with cancer.[29][30] The film was released on 20 December 2019.

In the 2018 action-comedy film , Dennis To returned in the role of Ip Man, with three other martial artists Wong Fei-hung, Huo Yuanjia and Chen Zhen, whisked through time to teach martial arts to a modern day comic book artist caught in a love triangle. Later in the movie, he reveals he's actually an imposter, Ip Bit Man.

In the 2019 film , he was portrayed by Michael Tong. In this film he must fight the Four Kings before he can confront a human trafficking ring and avenge the death of one of his students.

In the 2019 film Ip Man: Kung Fu Master, Dennis To reprised the role again as Ip Man, set during his time as a police officer in Guangzhou before the start of Chinese Communist Revolution in 1949.