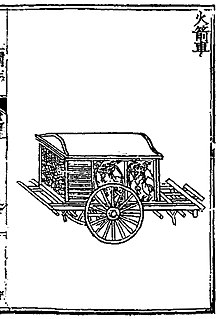 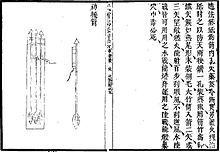 A "nest of bees" (yi wo feng 一窩蜂) rocket arrow launcher as depicted in the Wubei Zhi. So called because of its hexagonal honeycomb shape.
See also: Gunpowder weapons in the Ming dynasty

The dating of the invention of the first rocket, otherwise known as the gunpowder propelled fire arrow, is disputed. The History of Song attributes the invention to two different people at different times, Feng Zhisheng in 969 and Tang Fu in 1000. However Joseph Needham argues that rockets could not have existed before the 12th century, since the gunpowder formulas listed in the Wujing Zongyao are not suitable as rocket propellant.[2]

Rockets may have been used as early as 1232, when reports appeared describing fire arrows and 'iron pots' that could be heard for 5 leagues (25 km, or 15 miles) when they exploded upon impact, causing devastation for a radius of 600 meters (2,000 feet), apparently due to shrapnel.[3] A "flying fire-lance" that had re-usable barrels was also mentioned to have been used by the Jin dynasty (1115–1234).[4] Rockets are recorded to have been used by the Song navy in a military exercise dated to 1245. Internal-combustion rocket propulsion is mentioned in a reference to 1264, recording that the 'ground-rat,' a type of firework, had frightened the Empress-Mother Gongsheng at a feast held in her honor by her son the Emperor Lizong.[5]

Subsequently, rockets are included in the military treatise Huolongjing, also known as the Fire Drake Manual, written by the Chinese artillery officer Jiao Yu in the mid-14th century. This text mentions the first known multistage rocket, the 'fire-dragon issuing from the water' (huo long chu shui), thought to have been used by the Chinese navy.[6]

Rocket launchers known as "nest of bees" were ordered by the Ming army in 1380.[7] In 1400, the Ming loyalist Li Jinglong used rocket launchers against the army of Zhu Di (Yongle Emperor).[7]

The American historian Frank H. Winter proposed in The Proceedings of the Twentieth and Twenty-First History Symposia of the International Academy of Astronautics that southern China and the Laotian community rocket festivals might have been key in the subsequent spread of rocketry in the Orient.[8]

As multiple rocket launchers, rocket carts were used in the Ming dynasty in the Jingnan War (1399 – 1402) and were carried on the ships of Zheng He (1371 – 1433) during his voyages to India and Africa. Huo Ches were primarily used in a defensive manner for close-range infantry support.[9]