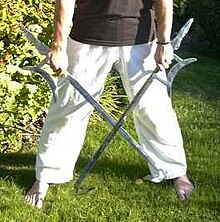 Hook swords, used (as is typical) as a pair.

Reliable information on hook swords is difficult to come by.[citation needed] While sometimes called an ancient weapon and described as dating from the Song dynasty to Warring States or even earlier, most antique examples and artistic depictions are from the late Qing era or later, suggesting that they are actually a comparatively recent design. They were also an exclusively civilian weapon, appearing in none of the official listings of Chinese armaments. Surviving sharpened examples point to actual use as weapons, but their rarity, and the training necessary to use them, strongly suggest that they were only rarely used as such.

Also known as "tiger hook swords" or qian kun ri yue dao (literally "Heaven and Earth, Sun and Moon sword"[1]), these weapons have a sharp blade similar to the jian, though possibly thicker or sometimes unsharpened, with a prong or hook (similar to a shepherd's crook) near the tip. Guards are substantial, in the style of butterfly swords. Often used in pairs, the hooks of the weapons may be used to trap or deflect other weapons.

There are five components to the hook sword:

Routines for hook swords are taught in such northern schools as Northern Shaolin and Seven-Star Mantis, and in some schools of southern arts such as Choy Lay Fut. Modern routines for hook swords are often very flashy, and may involve techniques such as linking paired weapons and wielding them as a single long, flexible weapon. Most routines are single person. Some schools of Baguazhang also teach a similar weapon, often called "deer horn knives" or "Mandarin duck knives." These weapons typically feature a much shorter or entirely missing main hook, and instead focus on the various cutting and stabbing blades arranged around the guard. Because of the various protrusions and the high possibility for accidental hooking or stabbing, they are almost never used in sparring, and are used sparingly in two person routines

In the film One-Armed Swordsman, a modified version of the hook sword is used.

Kabal from the video game series Mortal Kombat wields a pair of hook swords. They were packaged with Liu Kang, Scorpion, Jade, and Shao Kahn 6-inch figures, as generic weapons in the toyline made by Toy Island.

In Avatar: The Last Airbender, Jet wields a pair of hook swords.

In The Legend of Korra: Turf Wars, The character Tokuga also wields a pair of hook swords.

In the 2001 film Crouching Tiger, Hidden Dragon, Yu Shu Lien wields a set of hook swords as one of the weapons she uses in her duel against Jen.

In the video game For Honor, wields a pair of hook swords.

In the video game Path of Exile, the weapon can be wielded by the player and it exists under the name of "Tiger Hook".

The assassin The Kiss of Death uses a pair of hook swords in the 2019 Lois Lane comic book series.

In the video game , the character Yang uses a pair of shuang gou when in combat.

In the manga Tekken Chinmi, the character Siba "The Bounty Hunter" use double sword hook.

In the Newgrounds series , the character Sanford uses a Hook based off of the Hook Sword.

In Shang-Chi and the Legend of the Ten Rings, hook swords are displayed in the emblem for the Ten Rings with many of its foot soldiers wielding them as weapons, including modified swords equipped with electrified blades.