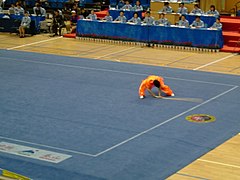 Gunshu event at the 2005 National Games of China

A gun (pronunciation [kwə̂n], English approximation: /ɡuən/ gwən, Chinese: 棍; pinyin: gùn; lit. 'rod, stick') is a long Chinese staff weapon used in Chinese martial arts. It is known as one of the four major weapons, along with the qiang (spear), dao (sabre), and the jian (straight sword). It is called, in this group, "The Grandfather of all Weapons". In Vietnam (as a result of Chinese influence), the gun is known as Côn in Vietnamese martial arts.[1][2][3][4]

The gun is fashioned with one thick end as the base and a thinner end near the tip, and is cut to be about the same height as the user or 6 foot. Besides the standard gun, there are also flail-like two section and three section varieties of the staff as well as non-tapered heavier variants. Numerous Chinese martial arts teach the staff as part of their curriculum, including (in English alphabetical order):

Bailangan and nangun are frequently found in modern wushu competitions in gunshu and nangun events respectively. The IWUF has created three different standardized routines and an elementary routine for gunshu and two different routines for nangun.

Gunshu refers to the competitive event in modern wushu taolu where athletes utilize a gun in a routine. It was one of the four main weapon events implemented at the 1st World Wushu Championships due to its popularity. Modern staffs are often made from wax wood or rattan, both of which are strong woods, but flexible and light. Some versions may also feature metal or rubber parts, and the current modern staffs for competition are usually made of light carbon fiber. The newer staffs do not break like the wax wood ones and are even lighter.

The IWUF has also created three different standardized routines for competition as well as an elementary routine. The first compulsory routine was created and recorded by Yuan Wenqing in 1989.