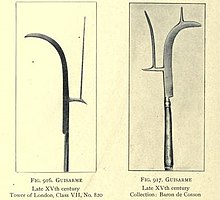 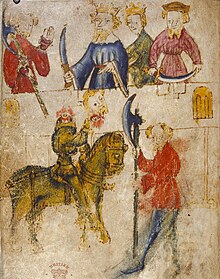 Illustration of a scene from Sir Gawain and the Green Knight, showing an axe-shaped "giserne".

A guisarme (sometimes gisarme, giserne or bisarme) is a pole weapon used in Europe primarily between 1000 and 1400. Its origin is likely Germanic, from the Old High German getīsarn, literally "weeding iron".[1] Like many medieval polearms, the exact early form of the weapon is hard to define from literary references, and the identification of surviving weapons can be speculative.

Supporting the second interpretation are the illustrations in the original manuscript of the Gawain poem which clearly show Sir Gawain with a long crescent shaped axe (see right). However, other texts from the same period draw a distinction from the axe and guisarme (Such as in Chaucer's Romaunt of the Rose: "With swerd, or sparth (axe) or gysarme" and Mandeville's Travels: "with swerds drawen and gysarmez and axes") and the use in the epic poem Sir Gawain and the Green Knight may have been poetic license. Olivier de la Marche, writing in the 15th century, describes the guisarme as "hafted combination of a dagger and a battle axe" and describes the weapon being of "great antiquity".[5]

In his novel Knight in Anarchy, George Shipway describes the process of training for a judicial duel using the guisarme, where he favours the double-socketed axe interpretation of the weapon.[6]