Sword
Not to be confused with Gladius (cephalopod).

Gladius (Latin: [ˈɡɫad̪iʊs̠]) is a Latin word meaning "sword" (of any type), but in its narrow sense it refers to the sword of ancient Roman foot soldiers. Early ancient Roman swords were similar to those of the Greeks, called xiphe (plural; singular xiphos). From the 3rd century BC, however, the Romans adopted a sword based on the weapons used by the Celtiberians in Hispania late into the Punic Wars, known in Latin as the gladius hispaniensis, or "Hispanic sword".[1] New types and variants of the gladius, such as the "Mainz gladius" and the "Pompeii gladius", were used since the first century AD, until they were replaced by the "spatha" in the third century.

A fully equipped Roman legionary after the reforms of Gaius Marius was armed with a shield (scutum), one or two javelins (pila), a sword (gladius), often a dagger (pugio), and, perhaps in the later empire period, darts (plumbatae). Conventionally, soldiers threw pila to disable the enemy's shields and disrupt enemy formations before engaging in close combat, for which they drew the gladius. A soldier generally led with the shield and thrust with the sword.[2]

Gladius is a Latin masculine noun. The nominative plural of it is gladiī. However, gladius in Latin refers to any sword, not only the sword described here. The word appears in literature as early as the plays of Plautus (Casina, Rudens).

Modern English words derived from gladius include gladiator ("swordsman") and gladiolus ("little sword", from the diminutive form of gladius), a flowering plant with sword-shaped leaves. 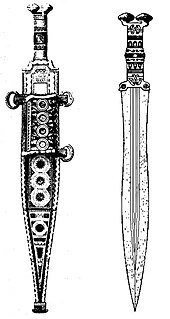 A sword of the Iron Age Cogotas II culture in Spain.

According to Polybius, the sword used by the Roman army during the Battle of Telamon in 225 BC, though deemed superior to the cumbersome Gallic swords, was mainly useful to thrust.[8] These thrusting swords used before the adoption of the Gladius were possibly based on the Greek xiphos.[9] Later, during the Battle of Cannae in 216 BC, they found Hannibal's Celtiberian mercenaries wielding swords that excelled at both slashing and thrusting.[9] A text attributed to Polybius describes the adoption of this design by the Romans even before the end of the war, which canonical Polybius reaffirms by calling the later Roman sword gladius hispaniensis in Latin and iberiké machaira in Greek.[9] It is believed Scipio Africanus was the promoter of the change after the Battle of Cartagena in 209 BC, after which he set the inhabitants to produce weapons for the Roman army.[10][11]

In 70 BC, both Claudius Quadrigarius and Livy relate the story of Titus Manlius Torquatus using a "Hispanic sword" (gladius Hispanus) in a duel with a Gaul in 361 BC.[12][13] However, this has been traditionally considered a terminological anachronism caused by the long established naming convention.[8] Still, some believe the Celtiberian sword was adopted after encounters with Carthaginian mercenaries of that nationality during the First Punic War (264-241 BC), not the second.[8] In any case, the gladius hispaniensis became particularly known in 200 BC during the Second Macedonian War, in which Macedonian soldiers became horrified at what Roman swords could do after an early cavalry skirmish.[9][8] It has been suggested that the sword used by Roman cavalrymen was different from the infantry model, but most academics have discarded this view.[8]

Arguments for the Celtiberian source of the weapon have been reinforced in recent decades by discovery of early Roman gladii that seem to highlight that they were copies of Celtiberian models. The weapon developed in Iberia after La Tène I models, which were adapted to traditional Celtiberian techniques during the late 4th and early 3rd centuries BC.[14] These weapons are quite original in their design, so that they cannot be confused with Gallic types. As for the origin of the word gladius, one theory proposes the borrowing of the word from *kladi- during the Gallic wars, relying on the principle that K often became G in Latin. Ennius attests the word gladius may have replaced ensis, which until then was used mainly by poets.[15]

Gladius blades of the Mainz type

By the time of the Roman Republic, which flourished during the Iron Age, steel and the steel-making process was not unknown to the classical world. Pure iron is relatively soft, but pure iron is never found in nature. Natural iron ore contains various impurities in solid solution, which harden the reduced metal by producing irregular-shaped metallic crystals. The gladius was generally made out of steel.

In Roman times, workers reduced ore in a bloomery furnace. The resulting pieces were called blooms,[16] which they further worked to remove slag inclusions from the porous surface.

A recent metallurgical study of two Etrurian swords, one in the form of a Greek kopis from 7th century BC Vetulonia, the other in the form of a gladius Hispaniensis from 4th century BC Clusium (Chiusi), gives insight concerning the manufacture of Roman swords.[17] The Chiusi sword comes from Romanized etruria; thus, regardless of the names of the forms (which the authors do not identify), the authors believe the process was continuous from the Etruscans to the Romans.

The Vetulonian sword was crafted by the pattern welding process from five blooms reduced at a temperature of 1163 °C. Five strips of varying carbon content were created. A central core of the sword contained the highest: 0.15–0.25% carbon. On its edges were placed four strips of low-carbon steel, 0.05–0.07%, and the whole thing was welded together by forging on the pattern of hammer blows. A blow increased the temperature sufficiently to produce a friction weld at that spot. Forging continued until the steel was cold, producing some central annealing. The sword was 58 cm (23 in) long.[17]

The Chiusian sword was created from a single bloom by forging from a temperature of 1237 °C. The carbon content increased from 0.05–0.08% at the back side of the sword to 0.35–0.4% on the blade, from which the authors deduce that some form of carburization may have been used. The sword was 40 cm (16 in) long and was characterized by a wasp-waist close to the hilt.

Romans continued to forge swords, both as composites and from single pieces. Inclusions of sand and rust weakened the two swords in the study, and no doubt limited the strength of swords during the Roman period.

The word gladius acquired a general meaning as any type of sword. This use appears as early as the 1st century AD in the Biography of Alexander the Great by Quintus Curtius Rufus.[18] The republican authors, however, appear to mean a specific type of sword, which is now known from archaeology to have had variants.

Gladii were two-edged for cutting and had a tapered point for stabbing during thrusting. A solid grip was provided by a knobbed hilt added on, possibly with ridges for the fingers. Blade strength was achieved by welding together strips, in which case the sword had a channel down the center, or by fashioning a single piece of high-carbon steel, rhomboidal in cross-section. The owner's name was often engraved or punched on the blade.

The hilt of a Roman sword was the capulus. It was often ornate, especially the sword-hilts of officers and dignitaries.

Stabbing was a very efficient technique, as stabbing wounds, especially in the abdominal area, were almost always deadly.[19] However, the gladius in some circumstances was used for cutting or slashing, as is indicated by Livy's account of the Macedonian Wars, wherein the Macedonian soldiers were horrified to see dismembered bodies.[20]

Though the primary infantry attack was thrusting at stomach height, they were trained to take any advantage, such as slashing at kneecaps beneath the shield wall.

The gladius was sheathed in a scabbard mounted on a belt or shoulder strap. Some say the soldier reached across his body to draw it, and others claim that the position of the shield made this method of drawing impossible. A centurion wore it on the opposite side as a mark of distinction.[21]

Towards the end of the 2nd century AD and during the 3rd century the spatha gradually took the place of the gladius in the Roman legions.

Several different designs were used; among collectors and historical reenactors, the three primary kinds are known as the Mainz gladius, the Fulham gladius, and the Pompeii gladius (these names refer to where or how the canonical example was found). More recent archaeological finds have uncovered an earlier version, the gladius Hispaniensis.

The differences between these varieties are subtle. The original Hispanic sword, which was used during the republic, had a slight "wasp-waist" or "leaf-blade" curvature. The Mainz variety came into use on the frontier in the early empire. It kept the curvature, but shortened and widened the blade and made the point triangular. At home, the less battle-effective Pompeii version came into use. It eliminated the curvature, lengthened the blade, and diminished the point. The Fulham was a compromise, with straight edges and a long point.[22] 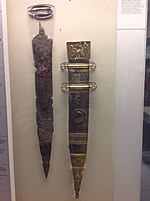 The Mainz Gladius on display at the British Museum, London

The Mainz Gladius is made of heavily corroded iron and a sheath made of tinned and gilded bronze. The blade was 50-55 centimetres long and 7 centimetres in width. The sword was 65 to 70 centimetres long. The sword weighed 800 grams. The point of the sword was more triangular than the Gladius Hispaniensis. The Mainz Gladius still had wasp-waisted curves. The decoration on the scabbard illustrates the ceding of military victory to Augustus by Tiberius after a successful Alpine campaign. Augustus is semi-nude, and sits in the pose of Jupiter, flanked by the Roman gods of Victory and Mars Ultor, while Tiberius, in military dress, presents Augustus with a statuette of Victory. 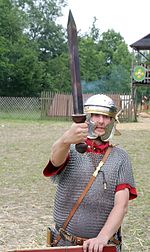 The Pompeii gladius was named by modern historians after the Roman town of Pompeii. This type of gladius was by far the most popular one. Four instances of the sword type were found in Pompeii, with others turning up elsewhere. The sword has parallel cutting edges and a triangular tip. This is the shortest of the gladii. It is often confused with the spatha, which was a longer, slashing weapon used initially by mounted auxilians. Over the years, the Pompeii got longer, and these later versions are called semi-spathes. The length of the blade was 45–50 cm (18–20 in). The length of the sword is 60–65 cm (24–26 in). The width of the blade is 5 cm (2.0 in). The sword weighs 700 g (1.5 lb) (wooden hilt).

^ This is only true for the nominative case; For more information, see the Latin declension page.

The articles in the links below often differ both in theory and in detail. They should not necessarily be understood as fully professional articles but should be appreciated for their presentational value.

Articles on the history or manufacture of the sword