For other uses, see Gatka (disambiguation).

Gatka (Punjabi: ਗਤਕਾ, Hindi: गतका, gatkā) is the name of an Indian martial art associated with the Sikhs of the Punjab who practice an early variant of the martial art.[1] It is a style of stick-fighting, with wooden sticks intended to simulate swords.[2] The Punjabi name gatka properly refers to the wooden stick used. The word originates as a diminutive of Sanskrit gada "mace".[3]

It originated in Punjab in the 15th century but much of the Gatka forms practiced today in the west are Europeanised versions of what was the original martial art of Sikhs known as Shastar Vidya. There has been a revival during the later 20th century, with an International Gatka Federation was founded in 1982 and formalized in 1987, and gatka is now popular as a sport or sword dance performance art and is often shown during Sikh festivals.[4] 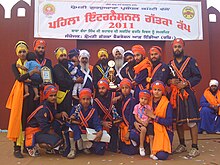 Gatka's theory and techniques were taught by the Sikh gurus. It has been handed down in an unbroken lineage of Ustads (masters), and taught in many akharas (arenas) around the world. Gatka was employed in the Sikh wars and has been thoroughly battle tested. It originates from the need to defend dharam (righteousness), but is also based on the unification of the spirit and body (miri piri). It is, therefore, generally considered to be both a spiritual and physical practise.[5]

After the Anglo-Sikh wars the art was banned by the new British administrators of India in the mid-19th century.[6] During the Indian Rebellion of 1857, the Sikhs assisted the British in crushing the mutiny. As a consequence of this assistance, restrictions on fighting practices were relaxed, but the Punjabi martial arts which re-emerged after 1857 had changed significantly.[7] The new style applied the sword-fighting techniques to the wooden training-stick. It was referred to as gatka, after its primary weapon. Gatka was used mainly by the British Indian Army in the 1860s as practice for hand-to-hand combat. The Ministry of Sports and Youth Affairs of the Government of India has included Gatka, with other three indigenous games namely Kalaripayattu, Thang-Ta and Mallakhamba, as a part of Khelo India Youth Games 2021 to be held in Haryana. This is a national sports event in India.[citation needed]

Khel (meaning sport or game) is the modern competitive aspect of gatka, originally used as a method of sword-training (fari-gatka) or stick-fighting (lathi khela) in medieval times. While khel gatka is today most commonly associated with Sikhs, it has always been used in the martial arts of other ethno-cultural groups. It is still practiced in India and Pakistan by the Tanoli and Gurjara communities.[8]