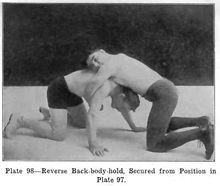 A folk wrestling style is any traditional style of wrestling, which may or may not be codified as a modern sport. Most cultures have developed regional forms of grappling.

Traditionally wrestling has two main centers in Great Britain: the West Country, where the Devon and Cornwall styles were developed, and in the Northern counties, the home of the Cumberland and Westmorland styles. 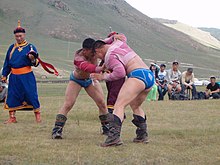 Wrestlers on the traditional Naadam festival in Mongolia, near Ulan Bator

Based on the movements of the Maori Gods of nature, this art is still practised by those trained by Te Whare Ahuru Rongomamau.