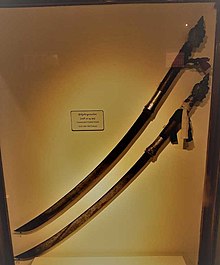 Burmese Dha: A single edge sword with a sharp point

Dha (Burmese: ဓား; also spelled dah[1]) is the Burmese word for "knife" and "sword" similar term to daab or darb (Thai: ดาบ) in Thai language for a single edge sword. The term dha is conventionally used to refer to a wide variety of knives and swords used by many people across Southeast Asia, especially present-day Myanmar (Burma), Thailand, Yunnan, Laos, Cambodia and Vietnam.[2]

Sword dance of banshay performed with a pair of dha

The broad use and diffusion of the dha across Southeast Asia makes it difficult to attribute a definitive origin.

The dha may have its origins[original research?] with the Tai people who migrated to the area from present-day Yunnan Province in southern China.[citation needed] The Khmer and Mon peoples were well established before the arrival the Tai or the Burmese people; perhaps they invented the dha as 13th-century reliefs at Angkor depict the weapon.[citation needed] The history of the region includes many periods where one or the other of these groups dominated, bringing along their culture and weapons to conquered areas.[citation needed]

Similar terms exist in the surrounding area with slightly different meanings. The Chinese word dao (dou in Cantonese) means knife but can refer to any bladed weapon with only one edge. From the Himalayas, the dao spread to Southeast Asia where it came into its present shape. While it is pronounced dha in Burmese, among Khmer-speakers it is known as dav (Khmer:ដាវ) and it may be related to the Malay words pedang and sundang, meaning sword. A related term, dap, means a long-handled sword in Malay. In Thailand, the dha corresponds to the krabi (Thai: กระบี่) but the equivalent Thai term is daab which is usually a single-edge sword.[citation needed]

Dha vary considerably according to locality but they share a few features that define them apart from other weapons and tools of the area. These features are a round cross-section grip, a long, gently curving blade (sometimes upward, other times downward in the direction of use) with a single edge, and no guard. Knives and swords with these characteristics are viewed by ethnic groups of the region as being of a single type, albeit with variations arising from local style and tradition.[3] There are a large number of possible shapes for the tip, with upswept, downswept, squared-off and spear-like varieties all being found. The blades are often inscribed, which can range from a simple maker's mark to quite intricate designs that may also feature inlays.

Hilts range from hand-width to quite long. A blade/hilt length ratio of 2:1 is not uncommon. Despite these long handles, most dha are meant for single-handed use, although some two-handed weapons exist. Guards are small, if present at all. Thai daab may have a guard similar to that of the Japanese katana. The montagnard dha may have a guard that barely exceeds the diameter of the handle and they can be regarded more as a spacer. The construction of the hilt varies widely by type and region or origin. Hilts range from simple wood, possibly wrapped in rattan or covered in ray skin, to elaborately worked silver and ivory. Pommels may or may not be present. Scabbards are made from two strips of wood, often bamboo, secured by metal bands, rattan (e.g., "village" dha), or completely wrapped in metal.[4]