Cornish wrestling (Cornish: Omdowl Kernewek[1]) is a form of wrestling which has been established in Cornwall for several centuries. It is similar to the Breton Gouren wrestling style. It is colloquially known as "wrasslin"[2] in the Cornish dialect. Historically, this usage has been more widespread with eg Chaucer,[3] Shakespeare[4] and Drayton[5] using the term to refer to West Country wrestling.

The referee is known as a 'stickler', and it is claimed that the popular meaning of the word as a 'pedant' originates from this usage. [6]

The wrestlers in the Cornish style both wear tough jackets enabling them to gain better grip on their opponent. All holds are taken upon the other wrestler's jacket, grabbing of the wrists or fingers is forbidden as well as any holding below the waist. Although all holds are to be taken upon the jacket, the flat of the hand is allowed to be used to push or deflect an opponent.[7][8]

The objective of Cornish wrestling is to throw your opponent and make him land as flat as possible on his back. Three sticklers watch and control each bout whilst also recording down the score of points achieved in play.[9] Four pins are located on the back of a wrestler, two at the back of each shoulder and two either side just above the buttocks. If a wrestler manages to throw his opponent flat onto his back, simultaneously scoring with all four pins they score four points in that single throw and this is called a "Back" at which the bout is then finished and the throwing wrestler is the winner.[10] The sticklers will each raise their sticks when they perceive a Back has been achieved. If two sticklers raise their sticks but one does not, a back is still awarded.[9] 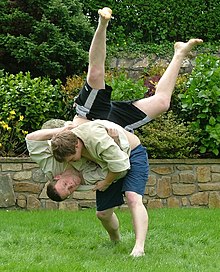 Cornish wrestling has a long history, and Geoffrey of Monmouth suggests Historia Regum Britanniae, of c. 1139 that Corineus wrestled a Cornish giant, Gogmagog or Goemagot upon the cliff top known as Lamm Goemagot.

The earliest written evidence for wrestling in the West Country comes from a 1590 poem entitled "Poly-Olbion" by Michael Drayton, concerning the Battle of Agincourt in 1415. It states that the Cornish men who accompanied Henry V into battle held a banner of two Cornish wrestlers in a hitch.

A banner used by the modern Cornish Wrestling Association, based on that allegedly used by Cornish soldiers at Agincourt in 1415. The text above the wrestlers reads "KERNOW BYS VYKEN" ("CORNWALL FOREVER"), and the text below the wrestlers reads "GWARY WHEK YU GWARY TEK" ("GOOD PLAY IS FAIR PLAY").

Cornish, Devon and Breton wrestlers have long taken part in inter-Celtic matches since at least 1402 and these still occasionally continue. In early times Cornish and Devonian wrestlers often had matches against each other though the rules they followed were not the same. One of these was the notable match between Richard Parkyn and the Devonian Jordan.

Sir Thomas Parkyns (1664–1741), known as the Wrestling Baronet, was a devotee of wrestling and organised an annual wrestling match in Bunny Park (prize a gold-laced hat). These matches continued until 1810. His book on the subject The Inn-Play: or, the Cornish Hugg-Wrestler was published in 1713 and reprinted many times.[12]

A contest at Bodmin in 1811 attracted 4,000 spectators, but thereafter interest in the sport waned. James Gerry (of Linkinhorne) and Samuel Rundle (Plymouth) fought for a £20 purse and the championship of Cornwall in 1883 at Liskeard. Lasting just over an hour, the match ended in a draw in the 19th round following Rundle tearing leg muscles. Gerry was reported in The Cornishman newspaper to have vanquished all the best men in America as well as many men in Cornwall, Rundle had beaten nearly all the wrestling men in Devon and Cornwall.[13]

In 1927 William Tregoning Hooper (Bras y Golon) agreed with the Breton Dr. Cottonec of Quimperle that there should be annual wrestling tournaments in which both Cornish and Breton wrestlers would compete.

In the 1970s Truro Cathedral School was teaching Cornish wrestling as part of its physical education programme and was the only school in Cornwall to do so.[14]

The different regional associations merged into the Cornwall County Wrestling Association ("CCWA") in 1923, to help standardize the rules, facilitate the competing of Duchy championships, mitigate the risk of clashing tournaments and promote Cornish Wrestling throughout Cornwall and indeed Worldwide.[7]

The East Cornwall Wrestling Federation ("ECWF") was formed in 1934 at least in part to hold competitions under more traditional rules.[7]

In 1938, the ECWF and CCWA were united to form the Cornish Wrestling Association ("CWA") and the belts and cups were retrieved from the bank.[10][7]

In 2004 the CWA became affiliated with the British Wrestling Association.

Notable people who were Cornish wrestlers

There are a number of Cornish wrestling throws that are taught in training classes, but each has many variants.

The following Senior Championships are fought annually in competitions across the Duchy:

The following Junior Championships are fought annually in competitions across the Duchy:

Cornish wrestling is Cornwall's oldest sport and as Cornwall's native tradition it has travelled the world to places like Victoria, Australia and Grass Valley, California following the miners and gold rushes. In the city of Grass Valley, the tradition of singing Cornish carols lives on and St Piran's Day celebrations are held every year, which along with carol singing, includes a flag raising ceremony, games involving the Cornish pasty, and Cornish wrestling competitions.[26]