Instructions on how to fight

Martial arts manuals are instructions, with or without illustrations, specifically designed to be learnt from a book. Many books detailing specific techniques of martial arts are often erroneously called manuals but were written as treatises.

Prose descriptions of martial arts techniques appear late within the history of literature, due to the inherent difficulties of describing a technique rather than just demonstrating it.

The earliest extant manuscript on armed combat (as opposed to unarmed wrestling) is Royal Armouries Ms. I.33 ("I.33"), written in Franconia around 1300.

Not within the scope of this article are books on military strategy such as Sun Tzu's The Art of War (before 100 BC) or Publius Flavius Vegetius Renatus' De Re Militari (4th century), or military technology, such as De rebus bellicis (4th to 5th century).

Detail of the wrestling scenes at Beni Hasan.

The only known instance of a book from classical antiquity is Papyrus Oxyrhynchus 466 from the 2nd century CE, detailing Greek wrestling techniques. There are some examples in the Chinese classics that may predate the turn of the Common Era: the Records of the Grand Historian by Sima Qian (c. 100 BCE) documents wrestling, referring to earlier how-to manuals" of the Western Han (2nd century BCE), which have however not survived. An extant Chinese text on wrestling is "Six Chapters of Hand Fighting" included in the 1st century CE Book of Han.[1]

All other extant manuals date to the Middle Ages or later. The "combat stele" at Shaolin Monastery dates to 728 CE. The earliest text detailing Indian martial arts is the Agni Purana (c. 8th century), which contains several chapters giving descriptions and instructions on fighting techniques.[2][3] It described how to improve a warrior's individual prowess and kill enemies using various methods in warfare whether they went to war in chariots, horses, elephants or on foot. Foot methods were subdivided into armed combat and unarmed combat.[4] The former included the bow and arrow, the sword, spear, noose, armour, iron dart, club, battle axe, chakram and trident.[5] The latter included wrestling, knee strikes, punching and kicking methods.[4]

"Illustrations only" manuals do not become extinct with the appearance of prose instructions, but rather exist alongside these, e.g. in the form of the Late Medieval German illuminated manuscripts. 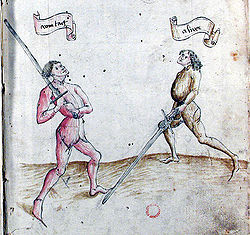 Fechtbuch (plural Fechtbücher) is Early New High German for "combat manual",[6] one of the manuscripts or printed books of the late Middle Ages and the Renaissance containing descriptions of a martial art. Usually, the term is taken to include 15th- and 16th-century German manuals, but the nature of the subject matter does not allow a clear separation of these from treatises from other parts of Europe on one hand (particularly from the Italian and French schools), and from manuals of later centuries on the other hand.

The Italian school is attested in an early manual of 1410, at which time it is not yet clearly separable from the German school. Indeed, the author Fiore dei Liberi states that he has learned much of his art from one "Master Johannes of Swabia". The heyday of the Italian school comes in the 16th century, with the Dardi school.

Similar to the situation in Italy, there is one early manual (c. 1400, dealing with the pollaxe exclusively, and later treatises set in only after a gap of more than a century.

Apart from three rather opaque texts of the later 15th century,[12] the native English tradition of fencing manuals begins with George Silver's Paradoxes of Defense (1599).

Scottish manuals detailing the use of the basket-hilted Scottish broadsword, besides other disciplines such as the smallsword and spadroon, were published throughout the 18th century, with early and late examples dating to the late 17th and early 19th centuries, respectively:

There are some manuals containing training advice for the medieval tournament and jousting such as the early Portuguese work A ensinança de bem cavalgar em toda a sela by Edward of Portugal (1391–1438). A riding instruction manual that also included martial information.

In 1599, the sword master, wrote the , the only fencing manual preserved that preserved the older "Common" or "Vulgar" system of Spanish fencing which has its traditions in the Middle Ages.

17th-century Spanish Destreza is very much steeped in the Spanish Baroque noblemen mindset, so doesn't contain much graphical explanations of the fencing techniques so much as hard to understand explanations based on mathematics and philosophical sciences in general. The subsequent difficulty on interpreting the theory and practice of Destreza correctly has led many times to this school of fencing being misunderstood. 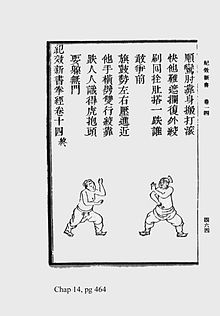 Some texts on unarmed combat survive from Han China (c. 1st century). A list of wrestling techniques is contained in the Malla Purana of 13th century Gujarat, India. The Chinese Jixiao Xinshu dates to the 1560s. The Korean Muyejebo dates to 1598, the Muyedobotongji dates to 1790. The Japanese The Book of Five Rings dates to 1645.