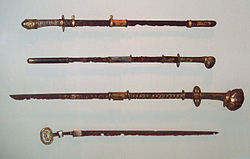 The chokutō (直刀, "straight sword") is a straight, single-edged Japanese sword that was produced prior to the 9th century. Its basic style is likely derived from similar swords of ancient China.[1][2] Chokutō were used on foot for stabbing or slashing and were worn hung from the waist.[3][4][5] Until the Heian period such swords were called tachi (大刀), which should not be confused with tachi written as 太刀 referring to curved swords.[6]

The production of swords in Japan is divided into specific time periods:[7]

The chokutō was among the earliest chinese types of sword to be forged in Japan, its basic style and forging techniques probably originated in ancient China. From there, chokutō was brought to Japan by way of Korean Peninsula and China in the Han Dynasty times.[8][9] It was created before the development of differential tempering in Japanese swordsmithing. Chokutō typically come in hira-zukuri and kiriha-zukuri tsukurikomi (blade styles) which make them very distinct from later tachi and katana which rarely use these forms. Swords of this period are classified as jōkotō and are often referred to in distinction from Japanese swords.[7]

Chokutō as a weapon died out by the middle of the Heian period, in the 10th century. And as a weapon, it was completely replaced by the Japanese sword, which is known today for its deep and graceful curves. The first sword with this curve was called Kenukigata-tachi (ja:毛抜形太刀), which was made by improving Warabitetō (ja:蕨手刀) used by Emishi in Tohoku region.[10][11] And Kenukigata-tachi evolved into tachi, which became the mainstream of Japanese swords for a long time.[12]

In today's Japan, straight swords made with the techniques after tachi, which have nothing to do with the historical chokutō, are also collectively called chokutō, and these are sometimes used in traditional ceremonies.