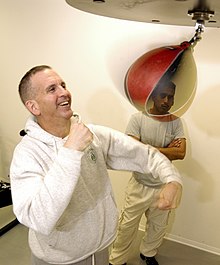 Lt. Cmdr. Philip Creider (US Navy), demonstrates the use of a Speed bag, a tool prominently used in training for boxing.

Boxing training is the training method that boxers use in order to get more fit for their sport.

A boxer's training depends largely on the point in their career at which he or she is situated. If the boxer is just a beginner, a minimal training routine might consist of learning how to hit a heavy bag, a speed bag, or a double end bag (a small bag with a cord on top and bottom connecting it to the floor and ceiling) as well as doing shadowboxing in front of a mirror, skipping rope, calisthenics and jogging every day, as well as an occasional practice bout inside the ring (sparring). Most beginning boxers will spend most of their early careers conditioning and establishing the fundamentals. For the amateur or professional boxer preparing for a competition or bout, however, training is much more stringent. Boxing is widely considered one of the most physically demanding sports in the world.[citation needed]

Boxing, like several other fighting sports, categorizes its competitors into weight classes. Some fighters try to take advantage of this by dieting before weigh-in so that they can be bumped down a weight class. In extreme cases, a fighter may forgo solid food before the official weigh-in ceremony, and eat a lot afterward to compensate. In some very extreme cases, boxers have been forced to stop eating solid food up to three days before the weigh-in ceremony, in order to make weight for the fight. Sometimes, if a boxer doesn't make the weight agreed for on the first weight-in, he or she might go to a sauna or to jog with a jacket to sweat and lose the extra pounds, however this is mainly water that the body holds. After weigh ins, competitors will in general add on weight before the fight, resulting in them weighing anywhere from 5 to 25 lbs above the weight class.[citation needed]

A boxer will generally try to have the maximum weight possible within the Boxing weight classes (s)he is fighting in, as a good boxer will be able to use his weight to his advantage.

Sparring is "practice fighting" with the aim of training skills and fitness, not to determine a winner. Sparring should always involve use of a mouth-guard, head-guard and groin-guard.[1] Sparring gloves are often more padded than gloves used in actual bouts. Sparring partners sometimes agree to practice particular types of punches or defense moves to focus their training.