In wrestling, a grappling clinch hold and stand-up grappling position 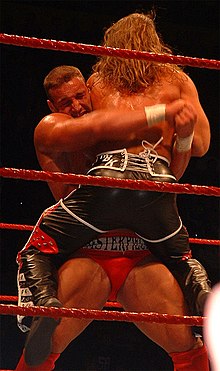 Chris Masters applying a bear hug from the front on Shawn Michaels.

A variation of the bear hug is the inverted bear hug, where one wrestler has his hands locked behind his opponent's mid or lower back and presses his forehead into their sternum, while pulling his locked hands inwards towards himself; forcing his opponent to bend backwards and fall. It is a painful move as much pressure is being exerted onto the opponent's sternum, often hurting the back bones and muscles as well as forcing air out of the lungs. In professional wrestling, this move is most often used by wrestlers known for great .

The move was used by Terrible Ted, an actual 600-pound bear which took part in wrestling exhibition matches in the USA and Canada between 1950 and 1975.[citation needed]

"Bear hug" was a term used in the 1970s for extremely close dancing, which sometimes was called "bump and grind".[citation needed]

In business, a "bear hug" is an unsolicited takeover bid which is so generous that the shareholders of the target company are very unlikely to refuse.[1]

A "bear hug" is also known as an "icebreaker game" in which an odd number of people are divided into pairs, leaving one member without a partner. All players sit down in a large circle, one partner in front of the other. The player without a partner calls 2–5 names, depending upon the size of the group, of players sitting in the front. Those players then try to make their way to the player without a partner, while their partners attempt to hold them back. The match ends when a player reaches the individual who called the names. Players who were called and failed to reach the caller switch places with their partner so they are now in the back. The game often involves injuries due to the violent struggles between partners.[citation needed]

The song "Summertime Clothes" (2009) from Animal Collective was originally known as "Bearhug".[2]