Type of long poleaxe
This article is about the "long poleaxe". For the regular poleaxe, see Poleaxe. For the Berdysh pistol, see OTs-27 Berdysh. 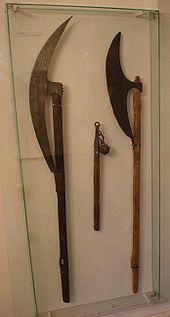 Two examples of a bardiche together with a flail, on display in Suzdal 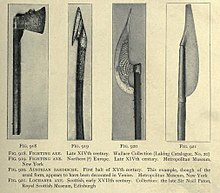 A bardiche /bɑːrˈdiːʃ/, berdiche, bardische, bardeche, or berdish is a type of polearm used from the 14th to 17th centuries in Europe. Ultimately a descendant of the medieval sparth or Danish axe, the bardiche proper appears around 1400, but there are numerous medieval manuscripts that depict very similar weapons beginning c. 1250. The bardiche differs from the halberd in having neither a hook at the back nor a spear point at the top.[1]

The use of bardiches started in early 14th century Austria[2] and in Scandinavia in the late 15th century.[citation needed] In the 16th century the bardiche became a weapon associated with streltsy (Russian guardsmen armed with firearms).[3] 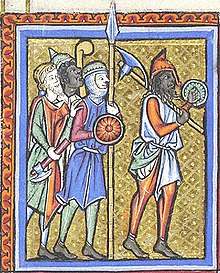 Illustration from the Psalter-Hours of Guiluys de Boisleux, 1246–1250. The man on far right carries what appears to be an early bardiche.

[The broad-headed axe] was succeeded by the berdiche, a pole-axe, longer in shaft and having the narrow lower end of tall blade rounded inward and braced against the shaft. At first this lower end of the blade merely touched the wooden shaft; it then became fastened to it; next it embraced the shaft, developing for this purpose an encircling loop, like the main ring which forms the socket of the axe-head. This “generalized” type of pole-axe was common to all countries of Europe before the year 1400. It was essentially the butcher's heavy weapon with which he clave the head of an ox. It was this primitive halberd which the Swiss mountaineers used in their early struggle with Austria, and at Sempach and Mortgarten it destroyed much splendid armor. But in battle it was found useful not only for chopping but for thrusting, hence the narrowing of the front end of its plate.[4]

The blade varied greatly in shape, but was most often a long, cleaver-type blade. The distinction was in how the blade was attached to the pole. The bardiche blade was attached to the pole either via two sockets (one at the top of the pole and one lower, at the base of the blade) or one socket at the top and one surface mount at the base, effectively mounting the heavy blade to the wooden shaft. This construction is also seen in Scottish polearms, such as the Lochaber axe and Jeddart staff, and bardiches are known to have been imported into Scotland in the 16th and 17th centuries.[5] Depending on the design of the particular weapons in question, at times a bardiche may greatly resemble a voulge.

While the blade was often very long for an axe (usually exceeding 2 feet (60 cm)) the shaft was one of the shortest of all polearms; rarely did it exceed 5 feet (1.5 m) in length. It relied more on the weight of its heavy blade to do the damage than a swing from a long pole. This makes the bardiche more similar to the Danish axe, in some respects, than to a true polearm. 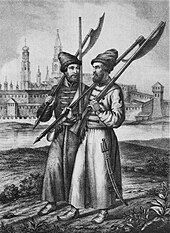 In Russia and in Poland this weapon was used to rest handguns upon when firing. It was standard equipment for the streltsy (literally "shooters") corps (foot, mounted and dragoons) and also for the Polish infantry (a shorter version invented by King Jan III Sobieski).[6]