Baji quan was originally called bazi quan (巴子拳 or 鈀子拳) or "rake fist" because the fists, held loosely and slightly open, are used to strike downwards in a rake-like fashion. The name was considered to be rather crude in its native tongue, so it was changed to baji quan. The term baji comes from the Chinese classic, the Yijing (I-Ching), and signifies an “extension of all directions”. In this case, it means “including everything” or “the universe”.

The first recorded baji quan teacher was Wu Zhong (吳鍾) (1712–1802). Other notable teachers included Wu Xiufeng (吳秀峰) and Li Shuwen (李書文) (1864–1934). The latter was from Cangzhou (滄州), Hebei, and acquired the nickname "God of Spear Li".[3] A Beijing opera Wu Shen (martial male character) by training, he was also an expert fighter. His most famous quote is, "I do not know what it's like to hit a man twice."[4] Li Shuwen's students included Huo Dian Ge (霍殿閣) (bodyguard to Pu Yi, the last Emperor of China), Li Chenwu (bodyguard to Mao Zedong), and Liu Yunqiao (劉雲樵) (secret agent for the nationalist Kuomintang and instructor of the Chiang Kai-shek's bodyguards).[5] Baji quan has since acquired a reputation as the "bodyguard style".[6][7] Ma Feng Tu (馬鳳圖) and Ma Yin Tu (馬英圖) introduced baji into the Central Guoshu Institute (Nanjing Guoshu Guan 南京國術館) where it is required for all students.[8]

Baji quan shares roots with another Hebei martial art, Piguazhang. It is said that Wu Zhong, the oldest traceable master in the baji lineage, taught both arts together as an integrated fighting system.[9] They eventually split apart, only to be recombined by Li Shuwen in the late 18th to early 19th century. As a testament to the complementary nature of these two styles, a proverb states: "When pigua is added to baji, gods and demons will all be terrified. When baji is added to pigua, heroes will sigh knowing they are no match against it." (八極參劈掛，神鬼都害怕。劈掛參八極，英雄嘆莫及)[9][10]

Prominent branches and lineages of the art survived to modern times, including Han family Baji, Huo family, Ji family, Li family, Ma family, Qiang family, Wu family (from Wu Xiefeng), Wutan Baji Quan and Yin Yang Baji Quan. Each has a unique element while sharing core practices. Some lineages are more common or only exist in Mainland China, while others have spread to Western countries.

Wutan Baji[11] is the most common lineage in the West today. Originally from Taiwan, where its founder, Liu Yunqiao, lived. This lineage includes additional arts that are taught alongside Baji, such as Piguaquan and Baguazhang.

Baji of Nanjing was introduced to the Guoshu Institute by students of Zhang Jingxing, Han Huiqing, and Ma Yingtu. Han had a great influence on the spread of Baji in southern China, to the point that there was a saying ‘bei li nan han’ meaning ‘Li [Shuwen] in the north and Han [Huachen] in the south’.[17]

Meng Village (Mengcun) is said to be the original birthplace of Baji Quan, or at least the modern versions of the art.[18] Baji is still widely practiced there.

Wu Xiufeng[19] (1908–1976) is the "grandfather" of many modern Baji lineages. The following lineages came down from him.

A branch of the art which has mutual influences from Jingang Bashi—the second art practiced by Tian Jinzhong.

The creation of Zhao Fujiang, who combined his knowledge of Baji, Xingyiquan and Yiquan to create a new art form.[24]

Baji quan opens the opponent's arms forcibly (qiang kai men 強開門) and mount attacks at high, mid, and low levels of the body (san pan lian ji 三盤連擊). It is most useful in close combat, as it focuses on elbow, knee, shoulder and hip strikes. When blocking an attack or nearing an opponent, baji quan techniques emphasize striking major points of vulnerability, namely the thorax (trunk of the body), legs and neck. 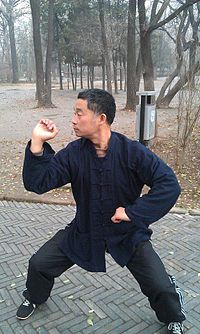 Zhou Jingxuan of Tianjin, holding a typical Baji Quan posture. The sideways-protruding elbow is often used for striking in this art.

These striking techniques are related to traditional Chinese medicine, which states that all parts of the body are connected, either physically or spiritually.

Most schools focus on a much smaller curriculum. Standard across almost all groups are Xiaobaji and Dabaji; two weapons forms, the sabre and the spear; a two-man training routine called Baji Duijie or Baji Duida and a series of 8 short attacking methods called the "Ba Shi" (Eight Postures), which are derived from the art of Shaolin Jingang Bashi.

The major features of baji include elbow strikes, arm/fist punches, hip checks and strikes with the shoulder. All techniques are executed with a short power, developed through training; among Chinese martial artists, baji is known for its fast movements. Baji focuses on infighting, entering from a longer range with a distinctive charging step (zhen jiao).

The essence of baji quan lies in jin, or power-issuing methods, particularly fa jin (explosive power). The style contains six types of jin, eight different ways to hit and several principles of power usage. Most of baji quan's moves utilize a one-hit push-strike method from very close range. The bulk of the damage is dealt through the momentary acceleration that travels up from the waist to the limb and further magnified by the charging step known as zhen jiao.

The mechanics of jin are developed through many years of practice and baji quan is known for its strenuous lower-body training and its emphasis on the horse stance.[4] Its horse stance is higher than that of typical Long Fist styles. Like other styles, there is also "the arrow-bow stance", "the one-leg stance", "the empty stance" (虛步; xūbù), "the drop stance" (仆步; pūbù), etc. There are eight different hand poses, in addition to different types of breathing and zhen jiao.

Baji focuses on being more direct, culminating in powerful, fast strikes that will render an opponent unable to continue. Even so, there are some styles that are derived from Baji's main principles or concepts on how to hit the opponent:

Many of these forms are also based or mixed with Luohan fist, a Shaolin style.[citation needed] The term ba shi may also refer to baji. The term is also used in xingyi quan.

Bajiquan is a staple in martial arts media, appearing in various movies and video games.

In China, it was featured in the 2013 movie, The Grandmaster (film) where it was used by character Yixiantian played by Chang Chen. There is also a Taiwanese idol drama Yīdài xīnbīng zhī bā jí shàonián (一代新兵之八極少年, eng. Baji Teenagers) and showcased by actor Chiu Pin Cheng (alias Leo Chiu).

In Western world, it was featured in The Matrix. Smith, played by Hugo Weaving, exhibits basic Bajiquan techniques in the film.[citation needed] Li Mei from Mortal Kombat: Deadly Alliance uses Bajiquan as one of her fighting styles.

Bajiquan has hugely impacted the Japanese pop culture. Bajiquan's impact would begin with Kenji (manga), a manga series written by Ryuchi Matsuda and illustrated by Yoshihide Fujiwara. It follows a teenage practitioner of Bajiquan and is supposedly based on Ryuichi Matsuda's own journey in Chinese martial arts.[31]

In 1993, Yu Suzuki - who got interested in martial arts because of the manga, Kenji - would direct Virtua Fighter, a groundbreaking 3D fighting game. The game was hugely successful in Japan and amongst the roster was a Bajiquan practitioner Akira Yuki, solidifying Bajiquan's stay in Japanese pop-culture. Bajiquan is also central to Yu Suzuki's Shenmue, a "sister" game to Virtua Fighter series.

In Japanese video games, it is featured in: