Ancient Greek boxing (Greek: πυγμαχία pygmachia, "fist fighting") dates back to at least the 8th century BC (Homer's Iliad), and was practiced in a variety of social contexts in different Greek city-states. Most extant sources about ancient Greek boxing are fragmentary or legendary, making it difficult to reconstruct the rules, customs and history surrounding this activity in great detail. Still, it is clear that gloved boxing bouts were a significant part of ancient Greek athletic culture throughout the early classical period.

There is archeological and artistic evidence of ancient Greek boxing (πύξ - pyx[1] or πυγμή - pygme[2] in Αncient Greek) as early as the Minoan and Mycenaean periods. There are numerous legends about the origins of boxing in Greece. One legend holds that the heroic ruler Theseus invented a form of boxing in which two men sat face to face and beat each other with their fists until one of them was killed. In time, the boxers began to fight while standing and wearing gloves (with spikes) and wrappings on their arms below the elbows, but otherwise they fought naked.

According to the Iliad, Mycenaean warriors included boxing among their competitions honoring the fallen, though it is possible that the Homeric epics reflect later Greek culture. Boxing was among the contests held in memorial of Achilles' slain friend Patroclus, toward the end of the Trojan war. It was in commemoration of Patroclus that the Greeks later introduced boxing (pygme / pygmachia) to the Olympic Games in 688 BCE. Participants trained on punching bags (called a korykos). Fighters wore leather straps (called himantes) over their hands (leaving the fingers free), wrists, and sometimes breast, to protect themselves from injury. There was no protection for the face or head.

The scholar and historian Philostratus maintained that boxing was originally developed in Sparta. The early Spartans believed helmets were unnecessary and boxing prepared them for the inevitable blows to the head they would receive in battle.[3] However, Spartans never participated in the competitive aspect of boxing, believing the means of defeat to be dishonorable.[4] 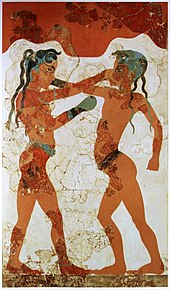 Minoan youths boxing (BCE 1500), Knossos fresco. This is the earliest known evidence for the use of gloves.

The style of protection utilized on the hands and knuckles could determine the style of fighting for the competitors. From the time of the Iliad until around 500 BCE, himantes were used as protection for the knuckles and hand. They were thongs of ox hide approximately 3.0–3.7 m (9.8–12.1 ft) long that were wrapped around the hands and knuckles numerous times. The thongs usually had loops in which an athlete could insert four of his fingers and clench them together in a fist. Generally, this was the only form of protection worn by participants from the era of Homer until the end of the fifth century. Classical sources describe these as "soft gloves", though modern study has indicated that these thongs were far from soft and were protection for the knuckles, not to soften the blow to the opponent, much like modern padded gloves, which protect the hand, allowing for harder punches. They can be found on many vases excavated from the fifth and sixth century BCE.[5]

In around 400 BCE sphairai were introduced. The sphairai were very similar to himantes. The only notable difference was that they contained a padded interior when wrapped around the hands and the exterior of the thong was notably more rigid and hard. In addition, "sharp thongs" were introduced during this time period to facilitate greater damage and remained popular up until around 200 CE.[5][6]

Soon before the implementation of the sphairai, the oxys were introduced to boxing. They consisted of several thick leather bands encircling the hand, wrist, and forearm. A band of fleece was placed on the forearm to wipe away sweat. Leather braces extended up the forearm to give greater support when punching and the knuckles were reinforced with leather as well.[7]

Korykos were the equivalent to modern punching bags. They were used for practice in the Palaestra and were filled with sand, flour, or millet. They were commonly depicted in art depicting boxing of the time.[5] 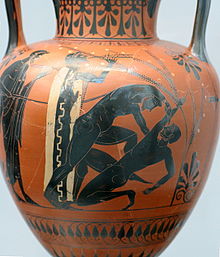 The right boxer signals giving up by raising his finger high (ca. BCE 500).

Boxers represented on a Panathenaic amphora. Currently located at the Metropolitan Museum of Art. 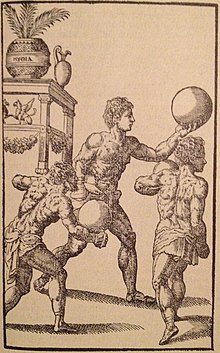 Boxers training by balancing balls on their clenched fists. This is a 16th Century interpretation of Ancient Greek training methods from De Arte Gymnastica[8] by Girolamo Mercuriale, 1569.

The currently accepted rules of ancient Greek boxing are based on historical references and images. Because of the few intact sources and references to the sport, the rules can only be inferred.[9]

Unlike modern boxing, the Greeks did not enclose the competitors in a ring to encourage fighting in close quarters. Therefore, most boxers fought defensively as opposed to offensively to encourage patience and caution. In addition, boxing in Ancient Greece was not divided into individual rounds. Competitors fought until finish, usually by surrender or mutual exhaustion. Felled boxers could be attacked without consequence, just as if they were standing.[5]

While the practice of dividing boxers into weight classes is popular in the modern world, it was an unheard of practice for the Greeks. Typically, any man who wished to participate in the event was welcome to regardless of strength or muscle mass, and participants competed with each other through random drawings.[5]

The precise rules of boxing in antiquity cannot be known for certain, and are thus inferred from historical references and images. It is believed that any type of blow with the hand was permitted, though using the hands to gouge at the eyeballs was not. Holding or wrestling one's opponent was also prohibited. If the fight lasted too long due to the tenacity of the competitors, the athletes could choose to exchange blows undefended to speed up the process. Judges probably enforced the rules by beating the offenders with a switch or a whip.[5]