William Ewart Fairbairn (/ˈfɛərbɛərn/; 28 February 1885 – 20 June 1960) was a British Royal Marine and police officer. He developed hand-to-hand combat methods for the Shanghai Police during the interwar period, as well as for the allied special forces during World War II. He created his own fighting system known as Defendu. Notably, this included innovative pistol shooting techniques and the development of the Fairbairn-Sykes Fighting Knife.

The television series Secrets of War suggested him as a possible inspiration for Q branch in James Bond.[citation needed]

Fairbairn served with the Royal Marine Light Infantry starting in 1901, and joined the Shanghai Municipal Police (SMP) in 1907. He served in one of the red light districts. During his service with the International Police in Shanghai, Fairbairn reportedly engaged in hundreds of street fights in the course of his duties over a twenty-year career, where he organised and headed a special anti-riot squad. Much of his body, arms, legs, torso, even the palms of his hands, were covered with scars from knife wounds from those fights.[1]:p:191 Fairbairn later created, organised, and trained a special anti-riot squad for the Shanghai police force. He also developed numerous firearms training courses and items of police equipment, including a special metal-lined bulletproof vest designed to stop high-velocity bullets from the 7.63x25mm Mauser pistol.[1]:p:191 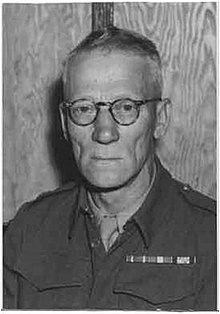 During World War II, he was recruited by the British Secret Service as an Army officer, where he was given the nickname "Dangerous Dan". Together with fellow close-combat instructor Eric Sykes, Fairbairn was commissioned on the General List in 1941. Fairbairn and Sykes were both commissioned as second lieutenants on 15 July 1940.[2] He trained British, American and Canadian Commandos and No. 2 Dutch Troop 10th Inter-Allied Commando forces, along with Ranger candidates in close-combat, pistol-shooting and knife-fighting techniques. Fairbairn emphasised the necessity of forgetting any idea of gentlemanly conduct or fighting fair: "Get tough, get down in the gutter, win at all costs... I teach what is called 'Gutter Fighting.' There's no fair play, no rules except one: kill or be killed," he declared.[1]:p:192 One of his pupils was Raymond Westerling, who fought behind enemy lines in Burma and Indonesia.

For his achievements in training OSS personnel, Fairbairn eventually rose to the rank of Lieutenant-Colonel by the end of the war, and received the U.S. Legion of Merit (Officer grade) at the specific request of OSS-founder "Wild Bill" Donovan.

After joining the SMP, he studied boxing, wrestling, savate, Shin no Shinto ryu jujutsu (Yoshin ryu) from Okada-sensei[who?], Kodokan judo in which he gained a 2nd dan black belt, and then Chinese martial arts[citation needed]. He developed his own fighting system—Defendu—and taught it to members of that police force in order to reduce officer fatalities. He described this system as primarily based on his personal experience, which according to police records included some 600 non-training fights, by his retirement at age 55 from the position of Assistant Commissioner in 1940.[citation needed]

In 1951, he went to Cyprus to train police and in 1952 (and 1956) Fairbairn provided training to the Singapore Police Force's Riot Squad unit, which is now Police Tactical Unit.[3]

Together with Eric A. Sykes, Fairbairn developed innovative pistol shooting techniques and handgun specifications for the SMP which were later disseminated through their book Shooting to Live With the One-Hand Gun (1942), along with various other police innovations such as riot batons, armoured vests, and other equipment.

He is perhaps best known for designing the famous Fairbairn-Sykes fighting knife, or 'Commando' knife, a stilletto-style fighting dagger used by British Special Forces in the Second World War, and featured in his textbook Scientific Self-Defence.[1]:p:191 Fairbairn also designed the lesser known Smatchet, and collaborated on the design of several other combat knife designs.