A war dance is a dance involving mock combat, usually in reference to tribal warrior societies where such dances were performed as a ritual connected with endemic warfare. Martial arts in various cultures can be performed in dance-like settings for various reasons, such as for evoking ferocity in preparation for battle or showing off skill in a more stylized manner. It could also be for celebration of valor and conquest. Many such martial arts incorporate music, especially strong percussive rhythms.

Examples of war dances include: 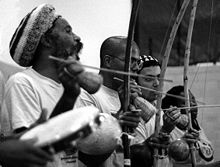 Capoeira is a martial art traditionally performed with a dance-like flavor and to live musical accompaniment, as seen depicted here.