Any weapon that can engage targets beyond hand-to-hand distance 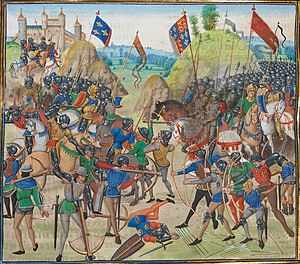 A period illustration of the Battle of Crécy. English longbowmen figure prominently in the foreground at right where they drive away the French crossbowmen.

A ranged weapon is any weapon that can engage targets beyond hand-to-hand distance, i.e. at distances greater than the physical reach of the user holding the weapon itself. The act of using such a weapon is also known as shooting. It is sometimes also called projectile weapon or missile weapon because it typically works by launching solid projectiles ("missiles"), though technically a fluid-projector (which throws out pressurized streams of liquid or even gas) and a directed-energy weapon (which does not involve any tangible projectile) are also ranged weapons. In contrast, a weapon intended to be used in hand-to-hand combat is called a melee weapon.

Ranged weapons give the attacker an advantage, since the target is often getting hit from beyond immediate visual range, therefore making it more difficult for the defenders to react and hitting back effectively.[1] It also puts distance between the attacker and the opponent, which is a safer combat option since the close physical contact during melee fights often puts the attacker within the immediate striking range of enemy counterattacks and thus at an equal risk of getting hurt or killed.

The line between ranged and melee weapons is not entirely definite; for instance, spears, axes, knives and daggers can be used for both throwing and striking, depending on purpose and situation, and a ranged weapon can also be used as a melee weapon in close encounters, such as a rifle being used for melee with its buttstock and a fixed bayonet, a handgun used as an improvised hammer and even an arrow being used for stabbing (as an improvised shiv) in desperate situations.

Early ranged weapons often included specifically designed hand-thrown weapons such as javelins, slings and darts, as well as more complex elastic weapons such as slingshots and bows; and siege engines like stone throwers, catapults, ballistas and trebuchets. These ranged weapons were extremely effective in ancient and early medieval warfare, especially when used en masse, as they gave the wielder an opportunity to launch multiple rounds of attack before an enemy armed with melee weapons or shorter-ranged missile weapons could even get close enough to pose a threat.

After the invention of gunpowder and the development of firearms, gun-type pneumatic ranged weapons became the dominant weapon of choice in armed conflicts, even in close combat. In modern warfare, ranged weaponry is also used both tactically and strategically in the form of long-range artilleries, rockets and guided missiles. The maximum effective range of a weapon is the greatest distance from which the weapon can be fired while still consistently inflicting casualties or damage. 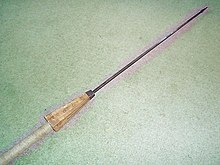 Reconstruction of a post-Marian pilum 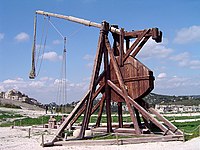 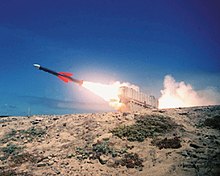 Most modern projectile weapons fall into the broader category of either direct fire or indirect fire, with the former often being regarded as guns and the latter as artillery. While some are small and light enough to be operated by individuals (i.e. small arms and grenade launchers), most require a team of individuals to service, maneuver and operate.