Martial arts are codified systems and traditions of combat practiced for a number of reasons such as self-defense; military and law enforcement applications; competition; physical, mental, and spiritual development; entertainment; and the preservation of a nation's intangible cultural heritage.

Although the term martial art has become associated with the fighting arts of East Asia, it originally referred to the combat systems of Europe as early as the 1550s. The term is derived from Latin and means "arts of Mars", the Roman god of war. Some authors have argued that fighting arts or fighting systems would be more appropriate on the basis that many martial arts were never "martial" in the sense of being used or created by professional warriors. (Full article...)

Although the earliest evidence of martial arts goes back millennia, the true roots are difficult to reconstruct. Inherent patterns of human aggression which inspire practice of mock combat (in particular wrestling) and optimization of serious close combat as cultural universals are doubtlessly inherited from the pre-human stage and were made into an "art" from the earliest emergence of that concept. Indeed, many universals of martial art are fixed by the specifics of human physiology and not dependent on a specific tradition or era.

Specific martial traditions become identifiable in Classical Antiquity, with disciplines such as shuai jiao, Greek wrestling or those described in the Indian epics or the Spring and Autumn Annals of China. (Full article...) 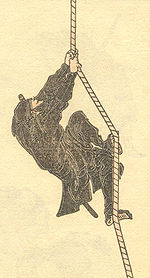 A ninja (忍者, Japanese pronunciation: [ɲiꜜɲdʑa]) or shinobi (忍び, [ɕinobi]) was a covert agent or mercenary in feudal Japan. The functions of a ninja included espionage, deception, and surprise attacks. Their covert methods of waging irregular warfare were deemed dishonorable and beneath the honor of the samurai. Though shinobi proper, as specially trained spies and mercenaries, appeared in the 15th century during the Sengoku period, antecedents may have existed as early as the 12th century.

In the unrest of the Sengoku period, mercenaries and spies for hire became active in Iga Province and the adjacent area around the village of Kōga, and it is from these areas that much of the knowledge regarding the ninja is drawn. Following the unification of Japan under the Tokugawa shogunate in the 17th century, the ninja faded into obscurity. A number of shinobi manuals, often based on Chinese military philosophy, were written in the 17th and 18th centuries, most notably the Bansenshukai (1676).

By the time of the Meiji Restoration (1868), shinobi had become a topic of popular imagination and mystery in Japan. Ninja figured prominently in legend and folklore, where they were associated with legendary abilities such as invisibility, walking on water and control over natural elements. As a consequence, their perception in popular culture is based more on such legends and folklore than on the covert actors of the Sengoku period. (Full article...)

Teddy Pierre-Marie Riner (/ˈriːnər/, French: [tedi pjɛʁ maʁi ʁinœʁ]; born 7 April 1989) is a French judoka. He has won ten World Championships gold medals, the first and only judoka (male or female) to do so, and two Olympic gold medals. He has also won five gold medals at the European Championships. He was a member of the Levallois Sporting Club before joining Paris Saint-Germain in August 2017. (Full article...)

Girlfight is a 2000 American sports drama film written and directed by Karyn Kusama and starring Michelle Rodriguez in both of their film debuts. It follows Diana Guzman, a troubled teenager from Brooklyn who decides to channel her aggression by training to become a boxer, despite the disapproval of both her father and her prospective trainers and competitors in the male-dominated sport.

Kusama wrote the screenplay for Girlfight after learning to box, wanting to make a film about the sport with a female protagonist. Although she struggled to find financiers for the film's $1 million (U.S.) budget, the production was eventually funded by John Sayles, Maggie Renzi and the Independent Film Channel. Rodriguez was cast in the lead role, despite having never acted before, and trained for four months to prepare for the role before filming commenced in New York and New Jersey.

Girlfight premiered on January 22, 2000 at the Sundance Film Festival, where it won the Grand Jury Prize. It was released theatrically on September 29, 2000 and grossed $1.7 million at the box office. The film was well received by critics, who offered particular praise to Rodriguez for her performance and Kusama for her direction. Both Kusama and Rodriguez received numerous accolades, including two National Board of Review Awards, two Independent Spirit Award nominations, and two Gotham Awards. (Full article...)

Dempsey and Firpo (sometimes referred to as Dempsey Through The Ropes) is a 1923–1924 oil canvas painting by George Bellows, depicting the September 14, 1923 boxing match between American Jack Dempsey and Argentine Luis Firpo. As time passed by it has become Bellows' most famous painting. The work has been in the collection of the Whitney Museum of Art since the museum's opening in 1931. (Full article...)

Things you can do

See the list on the right of Martial art related projects who organise work on these articles. You can also add your self to the list of Wikipedians by martial art