Enforcement of the law by some members of society 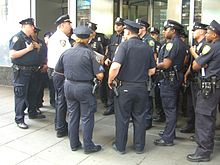 Lieutenant debriefing New York City Police Department officers at Times Square. The NYPD is the largest police force in the United States, with a uniformed force of over 38,000 as of 2018. 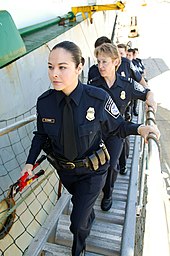 U.S. Customs and Border Protection officers board a ship.

Law enforcement is the activity of some members of government who act in an organized manner to enforce the law by discovering, deterring, rehabilitating, or punishing people who violate the rules and norms governing that society.[1] Although the term encompasses police, courts, and corrections, it is most frequently applied to those who directly engage in patrols or surveillance to dissuade and discover criminal activity, and those who investigate crimes and apprehend offenders,[2] a task typically carried out by the police, sheriff or another law enforcement organization.

Modern state legal codes use the term peace officer, or law enforcement officer, to include every person vested by the legislating state with police power or authority, traditionally, anyone "sworn or badged,  who can arrest any person for a violation of criminal law, is included under the umbrella term of law enforcement.

Although law enforcement may be most concerned with the prevention and punishment of crimes, organizations exist to discourage a wide variety of non-criminal violations of rules and norms, effected through the imposition of less severe consequences such as probation.

Most law enforcement is conducted by some type of law enforcement agency, with the most typical agency fulfilling this role being the police. Social investment in enforcement through such organizations can be massive, both in terms of the resources invested in the activity, and in the number of people professionally engaged to perform those functions.[2]

Law enforcement agencies tend to be limited to operating within a specified jurisdiction. In some cases, jurisdiction may overlap in between organizations; for example, in the United States, each state has its own statewide law enforcement arms, but the Federal Bureau of Investigation is able to act against certain types of crimes occurring in any state. Various specialized segments of society may have their own internal law enforcement arrangements. For example, military organizations may have military police.