Kajukenbo (Japanese: カジュケンボ Kajukenbo) is a hybrid martial art from Hawaii. It was developed in the late 1940s and founded in 1947 in the Palama Settlement of Palama, Hawaii.

The name Kajukenbo is a combination of the various arts from which its style is derived: KA for Karate, JU for Judo and Jujutsu, KEN for Kenpo and BO for Boxing (Kajukenbo).[2][3][4] Kajukenbo training incorporates a blend of striking, kicking, throwing, takedowns, joint locks and weapon disarmament.[2]

Today, Kajukenbo is practiced all over the world in many different branches (examples like Holck\ McCarrell Branch Kajukenbo Juijitsu, just for reference).[5] In contrast to many traditional martial arts, students are not required to mimic their teacher, but are encouraged to develop their own "expression" of the art after they first master the system.

"Through this fist style one gains long life and happiness."[6]

Kajukenbo was founded in 1947 in the Palama Settlement on Oahu, Territory of Hawaii. In the late 1940s, the Palama Settlement was a violent area. Due to this environment, five martial artists from varying backgrounds came together with the goal of developing an art that would be practical and effective on the street. These founders sought to develop one style that would complement each of their individual styles and yet allow for effective fighting at a greater variety of ranges and speeds.[7][8]

The five founding members of Kajukenbo were:[3]

In its conception, the founders followed a simple rule, if a technique worked consistently on the street (or against one another), then it stayed in the system, if it did not, it was discarded. This allowed the style to maintain its self-defense focus, while covering limitations found within each of their traditional arts.[10] 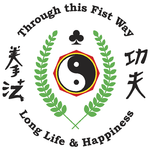 One example of a Kajukenbo crest

Shortly after its conception, the Korean War broke out, and with it Joe Holck, Peter Choo, Frank Ordonez, and Clarence Chang left Hawaii on active military service, leaving only Adriano Emperado to continue teaching the system.[11]

Emperado and his brother Joe introduced the hybrid Kenpo to the public by opening the Palama Settlement School in 1950. In 1957 they started calling the school the 'Kajukenbo Self Defense Institute' (K.S.D.I.). The training there was notoriously brutal.[dubious – discuss][according to whom?] Their goal was to be invincible on the street, thus the students sparred with full contact.[citation needed] Emperado had a motto, "The workout isn't over until I see blood on the floor". He also said "the best teacher is pain". His philosophy was that if someone was afraid of pain they would be defeated the first time they were hit. Those who remained developed into tough fighters with a reputation for employing their art in street fights with little provocation.[according to whom?]

In 1959, Emperado continued to add more Kung Fu into Kajukenbo, shifting the art to a more fluid combination of hard and soft techniques. Many techniques from Five Animal Kung Fu were integrated. Since then, Kajukenbo has proved to be an improvement-based, continuously evolving and open form. John Leoning,[who?] also helped bring out the "bo" of Kajukenbo by pointing out that there should be no wasted motion.

The art slowly began to grow in popularity, and soon Emperado had 12 Kajukenbo schools in Hawaii, making it the second largest string of schools at the time.[citation needed] Joe Halbuna, Charles Gaylord, Tony Ramos, Christopher Fournier and Aleju Reyes, who all earned a black belt from Emperado, brought Kajukenbo to the U.S. mainland in 1960. They each opened Kajukenbo schools in California. In 1969, Tony Ramos trained with and exchanged ideas and methods with Bruce Lee.[citation needed] Tony's version of Kajukenbo became known as the "Ramos Method" and is kept alive by numerous instructors.[further explanation needed]

In a 1991[volume & issue needed] interview with Black Belt Magazine, Emperado was asked who some of the Kajukenbo tournament stars were and said

According to Chuck Norris, in his book Against All Odds: My Story, he won the middleweight title in 1967, at the Long Beach Internationals; then defeated Carlos Bunda who had won the lightweight title.

Kajukenbo continues to evolve with each generation and maintains its primary focus on realism and practicality. There are usually martial arts schools that will change along with time to fit into the day's society. It is generally thought that "unfair" moves, such as strikes to the eyes or groin, are perfectly acceptable, as is whatever else the practitioner feels is necessary to get home that day.[12]

Training workouts emphasize cardio conditioning and functional strength. While individual schools may show variation, it would not be unusual to train with sandbags or boxing gloves. There are core self-defense techniques at the heart of Kajukenbo and Kajukenbo schools eschew impractical and flashy moves. Most kajukenbo curricula feature counter-attacks to punches, kicks, grabs, as well as using knives, sticks and guns to counter back. While this base of common knowledge will keep schools' styles similar, there is plenty of room for variation. This openness tends to encourage schools to incorporate other arts into their practice. The primary concentration of all Kajukenbo schools remains real world self-defense, because protecting one's self in a street-fighting situation is primary.[13]

Traditional Japanese martial art ranking is often followed. One common belt order is as follows: white, yellow, orange, purple, blue, green, brown, black. followed by the other various degrees of black belt. The schools have second and third stripe belts that feature a white for second or black for third stripe running down the center of the belt.

Black belt rankings and titles can also vary, with most schools adopting either Chinese or Japanese titles.

The original style of Tum Pai might have been put together by Adriano D. Emperado, Al Dacascos and Al Dela Cruz in the early 60s to create an advanced style for the Kajukenbo system.[14][15][16][self-published source?][17] In the mid-60s the developments that made up Tum Pai became incorporated into what was called "Chu'an Fa". In 1971 Jon A. Loren started incorporating the concepts of Tai-Chi and Southern Sil-lum into his Kajukenbo classes. This was called Northern Kajukenbo until 1976. In 1976, while staying with Emperado in Hawaii, he demonstrated his concepts and techniques and asked if he could call it Tum Pai and bring the name back to life. Emperado granted permission with the acknowledgment that the original Tum Pai followed a different path than the revised Tum Pai soft style. The name Tum Pai, which means "central way", fits the Tai Chi concept blended into the Kajukenbo format.

In Hawaii during the early 1960s Adriano Emperado, along with students Al Dacascos and Al Dela Cruz, incorporated innovations of the style Tum Pai and other martial arts into their Kajukenbo training.[18] Later it became obvious that they were no longer doing Tum Pai and it would have to be named something else. In the mid 60s Al Dacascos moved to Northern California and continued training in the Northern and Southern styles of Sil-lum Kung Fu to enhance his Kajukenbo training. It was in 1965 that the name Chu'an Fa was introduced.

Wun Hop Kuen Do was founded by Al Dacascos, in Cantonese Chinese Wun Hop Kuen Do means "combination fist art style" Wun Hop Kuen Do techniques identify with, and are based on, the Kajukenbo system.[19] This martial arts style incorporates techniques from many different styles including Northern and Southern Kung Fu systems and Escrima. Since this style is always being developed it is not a fixed system. This means that practitioners of the style are always striving to improve it by the incorporation and improvement of useful methods or techniques. In addition the philosophy of remaining "unfixed" also applies to the defense techniques, in that there is no defined response to a given situation, and they attempt to fit the situation as it arises. This idea leads to self-defense that is creative and allows one to think about what is the best response. This is one of the primary things that sets this style apart from most others, it is a martial art that asks you to think for yourself and use your own common sense to actually see what you should do next. There are many drills to allow practice of this type of fluidity and creativity that lead to the ability to respond reflexively to any situation—which is in contrast to many other training methods where one is supposed to mimic techniques which are often not practical, except under very defined circumstances.

Founded by Sijo Adriano Emperado, and handed to his sister SGM DeChi Emperado, and she handed it to Her son GM Kimo Emperado and his Deputy Chief GM Glen Fraticelli, exists as an umbrella aiming to bring all branches of Kajukenbo under Sijo's umbrella. One body, while appreciating each different part of the body. The KSDI welcomes all true practitioners of Kajukenbo.[20]

In 1967 Charles Gaylord, along with other accomplished Kajukenbo practitioners Aleju Reyes, Joe Halbuna, Tony Ramos, John Ramos and Al Dacascos formed the Kajukenbo Association of America (KAA.)[21][self-published source?] The KAA organization lasted until the early 1970s, but it was brought back in 1980 under the leadership of Charles Gaylord who had recently received his 9th degree black belt under founder Adrian Emperado. Fifteen years later in September 1995, the KAA's black belts promoted Charles Gaylord to the honorary rank of 10th degree black belt. Grandmaster Gaylord's traditional Kajukenbo curriculum continues to be taught by his chief instructors who operate Kajukenbo schools in Hawaii and other parts of the United States.[6]

The 1982 children's book 'A Bundle of Sticks' by Pat Rhoads Mauser, is the story of a fifth-grade boy Ben Tyler, who is being bullied by a much larger boy named Boyd Bradshaw. One day Ben comes home from school with a badly bruised nose, so Ben's parents decide to enroll him in a Kajukenbo martial arts school. Ben reluctantly agrees to attend the school because his mother has already paid the instructor who is known only as Sifu. At first Ben thinks he will not enjoy Kajukenbo, but he eventually discovers how valuable his training is when he successfully defends himself from Boyd.[22]