Range of techniques used in many disciplines, styles and martial arts
This article is about martial arts and combat sports. For other uses, see Grapple (disambiguation). 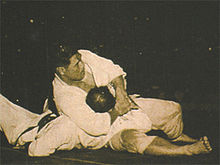 Grappling, in hand-to-hand combat, describes sports that consist of gripping or seizing the opponent.[1] Grappling is used at close range to gain a physical advantage over an opponent, either by imposing a position or causing injury. Grappling is a broad term that encompasses many disciplines. These various martial arts can be practiced both as combat sports and for self-defense. Grappling contests often involve takedowns and ground control, and may end when a contestant concedes defeat, also known as a submission or tap out.[2]

Grappling most commonly does not include striking or the use of weapons. However, some fighting styles or martial arts known especially for their grappling techniques teach tactics that include strikes and weapons either alongside grappling or combined with it.[3] 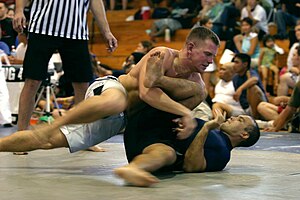 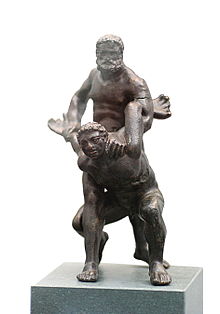 A Greek bronze statue from 2nd century BC depicting Pankration. The standing fighter is applying an armlock, a grappling technique. From the Staatliche Antikensammlungen in Munich.

Grappling techniques can be broadly subdivided into clinch fighting; takedowns and throws; submission holds and pinning or controlling techniques; and sweeps, reversals, turnovers, and escapes.

The degree to which grappling is utilized in different fighting systems varies. Some systems, such as amateur wrestling, pehlwani, judo, sumo and Brazilian jiu-jitsu are exclusively grappling arts and do not allow striking. Many combat sports, such as shooto and mixed martial arts competitions use grappling while retaining striking as part of the sport.[4] Grappling is not allowed in some martial arts and combat sports, usually for the sake of focusing on other aspects of combat such as punching, kicking or mêlée weapons. Opponents in these types of matches, however, still grapple with each other occasionally when fatigued or in pain; when either occurs, the referee will step in and restart the match, sometimes giving a warning to one or both of the fighters. Examples of these include boxing, kickboxing, taekwondo, karate, and fencing. While prolonged grappling in Muay Thai will result in a separation of the competitors, the art extensively uses the clinch hold known as a double collar tie.

Grappling can be trained for self-defense, sport, and mixed martial arts (MMA) competition. 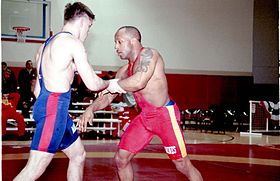 Stand-up grappling is arguably an integral part of all grappling and clinch fighting arts, considering that two combatants generally start fighting from a stand-up position. The aim of stand-up grappling varies according to the martial arts or combat sports in question. Defensive stand-up grappling concerns itself with pain-compliance holds and escapes from possible grappling holds applied by an opponent, while offensive grappling techniques include submission holds, trapping, takedowns and throws, all of which can be used to inflict serious damage, or to move the fight to the ground. Stand-up grappling can also be used both offensively and defensively simultaneously with striking, either to trap an opponents arms while striking, prevent the opponent from obtaining sufficient distance to strike effectively, or to bring the opponent close to apply, for instance, knee strikes.

In combat sports, stand-up grappling usually revolves around successful takedowns and throws. Grappling is a major part of combat glima and Løse-tak sport glima, and the fight continues on the ground if both combatants end up there. In other martial sports such as MMA, the fight may continue on the ground. 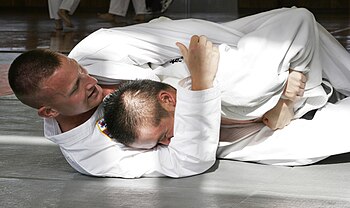 In judo, the aim of ground techniques (ne-waza) is to obtain a chokehold, joint lock or to pin the opponent.

Ground grappling refers to all the grappling techniques that are applied while the grapplers are no longer in a standing position. A large part of most martial arts and combat sports which feature ground grappling is positioning and obtaining a dominant position. A dominant position (usually on top) allows the dominant grappler a variety of options, including: attempting to escape by standing up, obtaining a pin or hold-down to control and exhaust the opponent, executing a submission hold, or striking the opponent. The bottom grappler is, on the other hand, concerned with escaping the situation and improving their position, typically by using a sweep or reversal. In some disciplines, especially those where the guard is used, the bottom grappler may also be able to finish the fight from the bottom by a submission hold. Some people feel more confident on the bottom because of the large number of submissions that can be accomplished from having the opponent in full-guard.

When unskilled fighters get embroiled in combat, a common reaction is to grab the opponent in an attempt to slow the situation down by holding them still, resulting in an unsystematic struggle that relies on brute force. A skilled fighter, in contrast, can perform takedowns as a way of progressing to a superior position such as a Mount (grappling) or side control, or using clinch holds and ground positions to set up strikes, choke holds, and joint locks. A grappler who has been taken down to the ground can use defensive positions such as the Guard (grappling), which protects against being mounted or attacked. If a grappler is strong and can utilize leverage well, a takedown or throw itself can be a fight-ending maneuver; the impact can render an opponent unconscious. On the other hand, grappling also offers the possibility of controlling an opponent without injuring them. For their reason, most police staff receive some training in grappling.[citation needed] Likewise, grappling sports have been devised so that their participants can compete using full physical effort without injuring their opponents.

Grappling is called dumog in Eskrima. The term chin na in Chinese martial arts deals with the use of grappling to achieve submission or incapacitation of the opponent (these may involve the use of acupressure points). Some Chinese martial arts, aikido, some eskrima systems, the Viking martial art of glima, as well as medieval and Renaissance European martial arts, practice grappling while one or both participants is armed. Their practice is significantly more dangerous than unarmed grappling and generally requires a great deal of training. 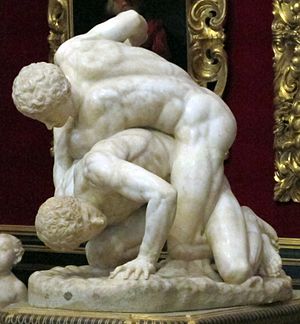 There are many different regional styles of grappling around the world that are practiced within a limited geographic area or country. Several grappling styles like Sport judo, shoot wrestling, catch wrestling, Grappling, Brazilian jiu-jitsu, Sport Sambo and several types of wrestling including freestyle and Greco-Roman have gained global popularity. Judo, Freestyle Wrestling, and Greco-Roman Wrestling are Olympic Sports while Grappling, Brazilian Jiu-jitsu and Sambo have their own World Championship Competitions. Other known grappling-oriented systems are sumo, shuai jiao, malla-yuddha and aikido.

In these arts, the object is either to take down and pin the opponent, or to catch the adversary in a specialized chokehold or joint lock which forces them to submit and admit defeat or be rendered helpless (unconscious or broken limbs). There are two forms of dress for grappling that dictate pace and style of action: with a jacket, such as a gi[5] or kurtka, and without (No-Gi). The jacket, or "gi", form most often utilizes grips on the cloth to control the opponent's body, while the "no-gi" form emphasizes body control of the torso and head using only the natural holds provided by the body. The use of a jacket is compulsory in judo competition, sambo competition, and most Brazilian jiu-jitsu competition, as well as a variety of folk wrestling styles around the world. Jackets are not used in many forms of wrestling, such as Olympic Freestyle, Greco-Roman wrestling and Grappling.

The ADCC Submission Wrestling World Championship is the most prestigious full range (takedown, position, and submission inclusive) grappling tournament in the world and is only held once every two years.

The World Jiu-Jitsu Championship, also commonly called the Mundials (Portuguese for "Worlds"), is the most prestigious jacketed full range (takedown, position, and submission inclusive) grappling tournament in the world. The event also hosts a non-jacketed division (no gi), but that sub-event is not as prestigious as ADCC in terms of pure non-jacketed competition.

United World Wrestling (UWW) is the international governing body for the sport of wrestling. It presides over international competitions for various forms of wrestling, including Grappling for men and women. The flagship Grappling's event of UWW is the Grappling World Championships.

GRiND is the first Indian Pro Grappling tournament series started in May 2017 conducting grappling championships (position and submission included). There is a first time no "Gi" event series in India.[7]