Basketball variant played on half of a regulation court

3x3 basketball (pronounced 3 on 3 or 3x3) is a form of the game played three a side on one basketball hoop. According to an ESSEC Business School study commissioned by the International Olympic Committee, 3x3 is the largest urban team sport in the world. This basketball game format is currently being promoted and structured by FIBA, the sport's governing body.[1] Its primary competition is an annual FIBA 3X3 World Tour,[2] comprising a series of Masters and one Final tournament, and awarding six-figure prize money in US dollars. The FIBA 3x3 World Cups for men and women are the highest tournaments for national 3x3 teams.

3x3 has been a basketball format long played in streets and gyms across the world, albeit in a less formal way. Starting in the late 2000s, 3x3 game rules started to become standardized throughout the United States, most notably through the Gus Macker[3] and Hoop It Up[4] tournament series, which held large events across the country that included teams and players from all skill levels. In 1992, Adidas launched its now-discontinued streetball competition.[5] Since then, the number of 3x3 events and competitions has been steadily growing around the world.

FIBA took the decision to first test 3x3 at the 2007 Asian Indoor Games in Macau. Further test events were held in April 2008 in the Dominican Republic and October 2008 in Indonesia. The international debut was at the 2009 Asian Youth Games: 19 teams competed in the boys' tournament and 16 teams competed in the girls' tournament. All games were held at Anglican High School in Tanah Merah, Singapore. 3x3 made its worldwide competitive debut at the 2010 Summer Youth Olympics in Singapore. The competition featured 20 teams in both boys' and girls' categories. The competition was held at the Youth Space. Since then, world championships in both open and U18 categories are held regularly.

After the success in Singapore, FIBA launched a full program to make 3x3 a standalone game with its own format and regular competitions. 3x3 will debut as an Olympic sport at the 2020 Summer Olympics.[6]

Rules of the game 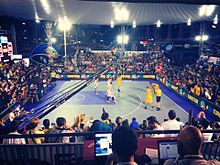 A men's international match between Romania and Slovenia in Bucharest (September, 2014)

FIBA releases from time-to-time a supplement to its official basketball rules specifically for 3x3. The rules state that regular FIBA rules apply to all situations not specifically addressed in the FIBA 3x3 rules. The current set, both in an abbreviated version[7] and longer format,[8] was published in August 2019.[9]

The current rules depart from regular full-court basketball in the following ways:

FIBA sees 3x3 as a major vehicle for promotion of the game of basketball throughout the world. FIBA Secretary General and IOC member Patrick Baumann explained: "The 3x3 concept has all the elements and skills required for basketball, it has inspired and will continue to inspire many great players in the future. At the same time, it is the easiest and one of the most-effective ways to bring youngsters to basketball, keep them and promote our game. Finally FIBA 3x3 can and will promote key educational and social values to the next generations."[12]

The North American National Basketball Association (NBA) has also embraced 3x3. Since 2016, the NBA has held a summer series of tournaments known as "Dew NBA 3X", where local amateur players from around the US compete in regional events for cash prizes and a finals berth. The men's and women's NBA 3X champions then advance to the USA Basketball national 3x3 championship to potentially represent their country internationally.[17] These tournaments also include live music performances, 3-point shooting contests for fans, an NBA 2K eSports competition, and appearances from current NBA players. In 2017, entertainer Ice Cube and entertainment executive Jeff Kwatinetz founded BIG3, where former NBA and US college basketball stars compete in a traveling league using rules slightly different than the FIBA rulebook, and also using a ball that meets the specifications for the men's full-court game instead of the FIBA 3x3 ball.

The qualification system for the FIBA 3x3 World Cups for men and women differs radically from the system used for FIBA full-court competitions. According to The New York Times, 3x3 has "an unusual qualifying system designed to grow the sport all year long as much as find the best teams for the World Cup."[18] National team entries are based strictly on a country's official 3x3 ranking. The ranking system for national teams also considers individual player rankings. Even a national ranking that would ostensibly qualify a team for the World Cup is not sufficient to gain entry because FIBA currently mandates that the 20 men's and women's teams that participate in a given year's World Cups come from 30 different countries, making it more difficult for individual nations to enter both genders into the World Cup. For example, the US women's team qualified for the 2018 World Cup while the men's team did not, even though the men were ranked higher than the women on the cutoff date. Participating in a FIBA-sanctioned 3x3 event can earn ranking points; according to a FIBA executive, "Andorra has heavy participation every weekend."[18] The current concentration of ranking events in Europe makes it more difficult for non-European nations, especially the US, to qualify. The aforementioned FIBA executive, when asked about the prospect of the 2020 Olympic debut of 3x3 potentially lacking any participation from the US, admitted that "a lot of teams want to beat the US. Beating the US teams is an achievement."[18]

After the success of the 2010 Summer Youth Olympics, FIBA established a regular World Cup that always includes men and women competing simultaneously in open U23 and U18 categories. World Cups are played every year, except in years when there are Youth Olympic Games or Olympic Games.

Classification to the World Cup is based on the 3x3 Federation Ranking,[19] which ranks all National Federations based on the 3x3 Individual World Ranking points of their top 100 nationals in the respective category (i.e. men, women, U23 men, U23 women, U18 men, and U18 women).

In addition to team competitions, World Cups also feature individual competitions such as dunking and shooting.

On June 9, 2017, the Executive Board of the International Olympic Committee announced that 3x3 basketball would be added to the Olympic programme for the 2020 Summer Olympics in Tokyo, Japan, for both men and women.[20]

In August 2017, it was announced that 3x3 basketball would be held at the 2022 Commonwealth Games in Birmingham, England.[21]